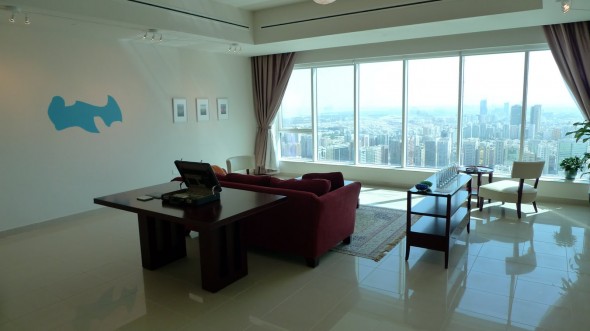 an exhibition of transmissible ideas with

A common art-making strategy when one enters into new territory is to listen, to ask, and to wait. As newcomers to Abu Dhabi, we considered this strategy, but then rejected it. Instead of waiting to receive information, we begin our sojourn in the Emirates by making an offer.

In curating this show, No Customs, held in our remarkably gallery like living space, we offer the work of artists connected to us from our home community of New York City. When they asked what life is like here, we answered we didn’t yet know. We told them to send what they could send via email, via instructions, via concept. We told them to send it fast. So then, what we have is a show called No Customs. This title is a double entendre. Practically, since no objects have been mailed, we were not slowed by the expense of shipping and the delays of customs. Metaphorically, the show is not about tradition or interpretation, but rather about mapping and transcription. How does form map onto landscape? How does it transform landscape? How do you demarcate space for contemplation, for understanding, for revolution? What happens to the body when its image occupies this demarcated space?

First, the approach to a problem. This is what we hear when listening to Vito Acconci’s audio piece, “Research Station, Antarctica, For Your Ears Only (2004-2010).” How does an artist (here architect) turn a landscape into a series of constraints to be addressed, to create a form? In the photographs of Melissa Dubbin and Aaron Davidson, the long time collaborators use smoke bombs to test the landscape. They create form with weather, wind, light, and clouds. 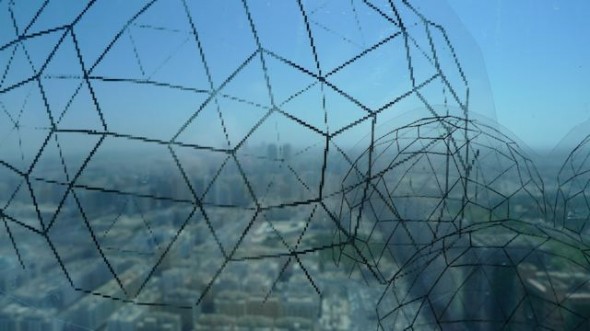 In a site specific project by Thomas Lail (ab0ve), a series of Buckminister Fuller domes is superimposed over the city view of Abu Dhabi, creating another take on the domes of the city and adding to the enormous architectural speculation already here. In another project, a memory sequence of images by Tara Fracalossi (below) offers a counterpoint to the desert with images of most verdant spring and bleakest winter. These images purport to be memory, but their repetition on the wall creates matrices of classifications that map new space. In the end they are more like letters in an alphabet than like stories of particular landscapes. 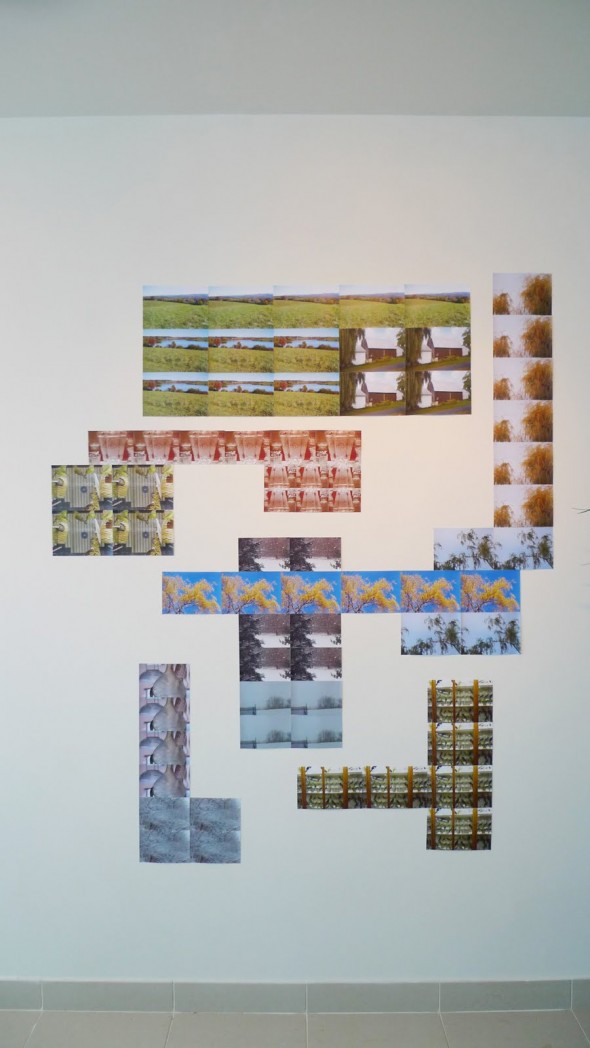 In answering a call to show work in Abu Dhabi, many artists considered the question of mapping, both graphically and metaphorically. In the work of Michael Mandiberg, the artist asked us to find an Arabic map of the USA in which we recreate the laser cuttings of print media that he is known for. In this work the message and the map collide. The artist duo MTAA and the sculptor Sara Hubbs sent ideas for works that, though they are generated very differently, come up with surprisingly congruent projects. MTAA asked us to find “the most colorful place” in Abu Dhabi. Then they provided software that translated this image into an abstract digital image (referred to as “the aesthetic object”). We could then display this any way we saw fit. In Sara Hubb’s project, an abstract form also results from a behind the scenes process. She photographed decaying areas of New York City and asked us to reproduce the patterns they create in plaster, building up a surface to form decoration from blight.

The projects of Jonathan Schipper and the collaborative team of Jennifer Dalton and Susan Hamburger ask us the audience to participate in the creation of the artwork by zeroing in on our patterns of behavior. In the ambitious project by Schipper, entitled “A Million Dollar Walk,” attendees of the opening reception will be given the opportunity to carry a briefcase full of money on a prescribed path through the building. Dalton and Hamburger ask participants questions about their behavior in Abu Dhabi, creating a changing sculptural bar graph that measures their assumptions about life in the capitol against actual practice.

Four artists in the exhibition deal with space by creating voids some for the viewer to inhabit speculatively others by creating spaces for lost objects. In “The New Revolution (2010),” Mark Tribe creates an installation that invites spectators to consider their own ideas about revolution. David Grubbs, a noted musician, sent us instructions to render a beautiful wall drawing whose omissions create open spaces for meaning to drift. In an animation by Karen Yasinsky, “You’d Better Be Careful,” omitted objects and spaces set interpretation even farther adrift. 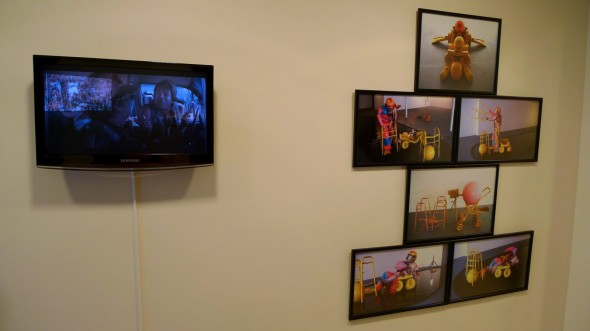 Several of the artists in the show responded with work implying performative space. In the video “Double Face Fantasy” by Jason Robert Bell and Marni Kotak, this space is a virtual one in that a portrait transforms through a technical gesture. Anthony Discenza’s video “The Future has Already Been Written” creates a tour de force collage of science fiction, and we follow the body of Charlton Heston through alternate visions of the future. In the work of Torsten Burns, “Resurrectables (Yellow-Mobilers),” the artist asked us to curate a selection of performance stills from a huge array of images of costumes, props, and locations. We selected images of vehicles, conveying transmission, speed, and the framing of the body as it moves through space. Finally, the work of photographer Bill Durgin presents work that brings it all together. The body becomes a landscape of skin, finally an abstracted “aesthetic object.” 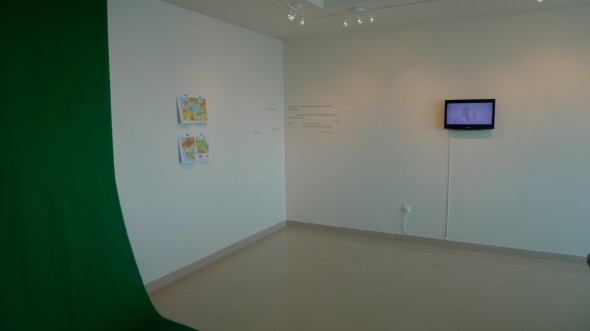 No Customs is located at Sama Tower, Suite 3708, Abu Dhabi. Sama Tower is at the corner of Airport Rd and Electra Rd., near the NMC (New Medical Center). The exhibition will be open Saturdays from 1-5 through Nov. 27 and by appointment. Please contact Jennifer or Kevin McCoy with questions and image requests: info@mccoyspace.com.

Jennifer McCoy is Visiting Professor at NYU Abu Dhabi. Kevin McCoy is Associate Professor Art and Art Professions, The Steinhardt School of Culture, Education, and Human Development, NYU New York, and a member of the affiliated faculty at NYU Abu Dhabi. In 2005 the McCoys received a Rave Award in the Art Category from Wired Magazine. Articles about their work have appeared in Art in America, Artforum, The Wire,  Spin Magazine, and Feed.

[This piece was adapted from blog posts at Kevin and Jennifer’s site Abu Blogghi.  © 2010 Jennifer and Kevin McCoy. Used by permission.]