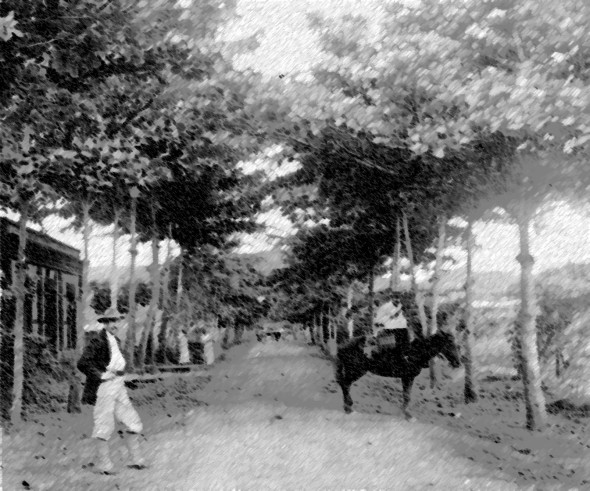 Reading Gabriel García Márquez’s novel One Hundred Years of Solitude led me to hear three sounds: the quiet pulse of rain, the tired sigh of almond trees, and—arching over all—the broken sound of silence. My poem sequence “Silence” opens with “Remedios.” This “fourteen-year-old grandmother” is at once a mystery we cannot break and a symbol of the innocence that has passed away. And while “Silence” begins with innocence, it ends with death. “Whitewashed Crypt” refers to the passage in the New Testament in which Jesus confronts the Pharisees, calling them white-washed tombs—beautiful to look at, but rotting and full of death within.

Just a gray face in a photograph
That no one ever sees —
A silent girl who silent calls
Amongst the almond trees.

Just a woman-child staring,
Emerald eyes agleam,
Whose merriment and innocence
Faded like a dream

Just a small face in a photograph,
A child scarcely grown —
A girl whose dusty dolls and toys
Were all she’d ever known.

Just a guileless, sweet-faced babe
Who took her lot and ran —
Just a tiny, half-grown girl
Who learned to love a man.

Beneath the rush of rain and wind
The blaze of bullets rang
And half a thousand corpses fell
Beneath the summer rain.

So bodies like bananas crammed
Rolled through the dying trees,
Past tired town and haunted homes,
And crashed into the sea.

But a dash of ink, a scratch of pen —
A thousand corpses gone.
Now nothing but a child’s tale,
And history rolls on.

For here the dead all freely wander,
Weeping at the time men squander
And wondering at this cycling world
Where all’s been said and done before —

This world of fog and frosted glass
Where withered wraiths reach through the past,
Their corpsened fingers spreading death,
Grasping mad for living breath.

Weeping in the Rain

Through the hollow, listless years
Sounds the gray refrain
Of children’s laughter turned to dust
And weeping in the rain.

A weathered mansion, beaten bare,
Bruised and battered and worn with care,
Sighs amongst the almond trees,
Stirred only by a summer breeze.

Its whitewashed walls, once proud and prim,
Have faded drab and grey and grim
With all the soot of glories won
Beneath the restless summer sun.

The fogs of time have laid their claims,
And shattered dreams have quenched the flames
Of hopeless hopes and frantic prayers,
Now scattered in the summer air.

That broken home of wayward souls —
Aged by the belfry’s mournful tolls —
Became a cradle and a shroud
Beneath the stormy, summer clouds.

A mausoleum, a whitewashed crypt,
Now of all its glories stripped,
Waits in silence and in vain —
Soft and still in the summer rain.

Emily Eagen is a first-year student at NYU Abu Dhabi, where she is currently pursuing a double major in Literature and Creative Writing, and Theater. Though as yet undecided in her future career plans, Emily seeks to pursue her passions wherever they may lead while enjoying the wonderful journey of life.

[Illustration by Cyrus R. K. Patell after a photograph by Strohmeyer & Wyman, “Almond trees on a road in the interior of Porto Rico, near Myaguez [sic],” c. 1900, courtesy U.S. Library of Congress.]