CHAOS on the Corniche 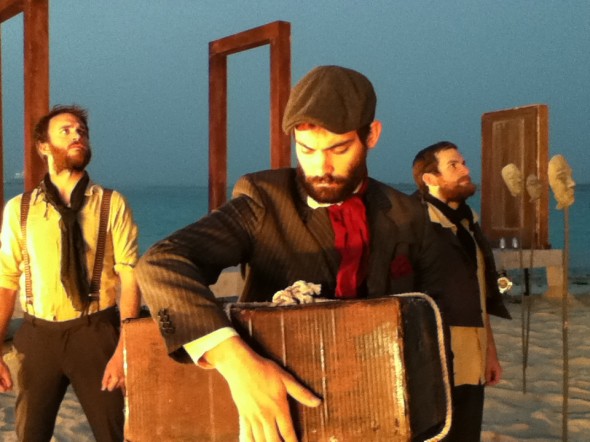 [Editor’s Note: On March 3, 4, and 5, 2010, the NYU Abu Dhabi Institute and Theater Mitu presented Chaos, a play inspired by the short stories of Luigi Pirandello, conceived and directed by Rubén Polendo, Associate Professor of Theater at NYU Abu Dhabi. Performed on a temporary stage erected on the beach next to the Abu Dhabi Corniche, the production was billed as the first professional theater production conceived, rehearsed and produced in Abu Dhabi. What follows is the director’s introduction to the script used by the performers.]

A Note on Chaos
By Rubén Polendo

What becomes of the human heart when home is a shifting landscape? How are the terms family, love, and happiness redefined amidst endless change and instability? How do superstitions, beliefs and traditions survive in the midst of migrations? How do dreams survive in the heart of the traveler? These are the questions that drive Theater Mitu’s production of Chaos.

As a child in Sicily, Luigi Pirandello’s entire world was riddled with such questions. A continuum of familial emigration out of Sicily and into the “new world” prompted him to say:

“…therefore I am the son of Chaos.”

It also infused the core of his work, particularly his short plays and stories. To Pirandello these questions were ever evolving and ever unsolvable. These questions prompted unforgettable characters and emotionally charged stories: stories of heartbroken mothers, possessed lovers, trickster scribes, and stubborn workers. In turn, it is these characters and stories that form the fabric of our production of CHAOS.

Coming from immigrant parents, this discussion is by no means new to me. Still, over the last year, these ponderings have become even more potent. My move to Abu Dhabi has created a very different emotional relief within which to experience this. I now find myself living as an immigrant in a completely different arena. Furthermore, I find myself in a place that is not only populated by immigrants but is in fact defined by that population.

On a daily basis I am confronted with this notion. (Whether it be by the NYU Abu Dhabi faculty, staff, and student community; the South Asian and Arab day-laborers; the Filipino service industry; the western expat community; or the myriad of other ungrouped immigrants.) And so witness the challenge of survival. Not only survival of the self—but survival of the self as defined by memories of love, family, traditions and happiness. The next question must of course be in regards to the non-immigrant population. How is a place altered upon the arrival of migrant populations? How do their ideals survive?

The above equation is what makes Abu Dhabi the perfect place for the premiere of this work. We hope that the audience for this piece is made up of a cross-section of the immigrant population of Abu Dhabi as well as a representation of the national population. Perhaps reminding us that there is a greater sense of commonality than we perhaps initially expect.

Artistically the production takes a page from two very important works that are inspired from the thematics of Luigi Pirandello’s short stories and plays. The first is a seminal 1984 film by the Taviani Brothers entitled Kaos. This film is not only a classic of Italian cinema (and world cinema for that matter), but it redefined Pirandello for generations to come. The second is a dance piece by American choreographer Martha Clarke. This piece gave a physical relevance and dimension to Pirandello’s work that had not been seen before.

As always with Theater Mitu, our production will be defined by the merging of global traditions we have been training in end exploring as part of our performance field-research. This piece will incorporate elements of Arabic Clowning, Japanese Noh, Butoh and Balinese puppet work. With dynamic physicality, live music and an evocative design set on the shore of the Arab Gulf, the piece delves into the heart of the immigrant experience. Ultimately merging our initial questions into a single one: How does hope survive amidst chaos?

[Chaos was presented in collaboration with the Abu Dhabi Authority for Culture and Heritage, with additional support from the Herb Alpert School of Music at CalArts. For more information about this production, see the Chaos page at Theater Mitu’s website and this feature article from The National in Abu Dhabi.]