ON LOCATION IN ABU DHABI
BY LAUREN HORST 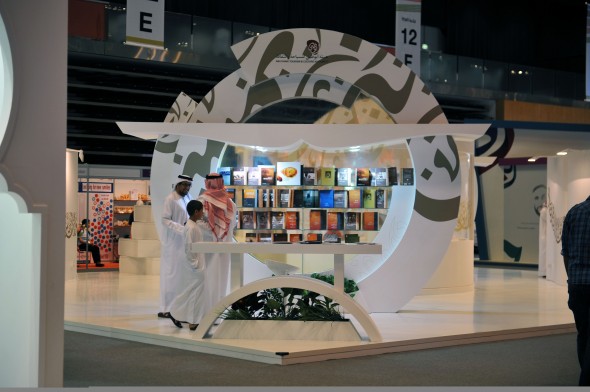 With rows of exhibitors lining the floor of Hall 9 the Abu Dhabi National Exhibition Centre (ADNEC), families strolling through the aisles with their kids in tow, and the sugary smell of the sweet corn stand, walking into the 2012 Abu Dhabi International Book Fair (ADIBF) was a bit overwhelming. But, as one NYUAD student later said to me, “overwhelming” in the sense of a little kid entering a toy store.

The metaphor is apt for two very good reasons. First, the ADIBF generously gave all students coupons with which to buy books, the way a parent might give a child a few spare dirhams to spend. Second, many of the Arab vendors were, literally, peddling children’s storybooks and games. That focus on youth was emphasized in a speech made by ADIBF Director Jumaa Abdulla Al Qubaisi, who said, “The readers of the future, and its true creators, are the readers of today from among these children and youngsters.”

As I scoured the shelves for an interesting title or an eye-catching book cover, I found myself wondering about the purpose of the fair. Is it simply an occasion for fun with the family? Is the fair an inward-looking effort to encourage Arab literary culture? Is it an effort to expose Arab writing to western writers, or to acquaint Arabs with western literary culture?

The international book fair is not new to the scene in Abu Dhabi. The ADIBF actually dates back to 1983 and has been an annual event since 1993. In 1986, 70 publishing houses participated in ADIBF. This year, according to the ADIBF press release, the fair boasted more than 900 exhibitors participated representing 54 countries and showcasing over 500,000 titles in 33 languages. And, today, the fair is about more than just books. In addition to a Cultural Programme of panels and talks with prominent authors, ADIBF featured a Creativity Corner for children, a Show Kitchen, and a Professional Programme of market overviews and seminars for aspiring networkers in the business.

More than two-thirds of the exhibitors hailed from Arab countries. True to its billing as an international book fair, however, the nationalities of the vendors ran the gamut from Lebanon and Jordan to Egypt and Japan. Browsing through the aisles, I saw books in German, Japanese, French and Turkish, among others. Vendors offered sometimes puzzlingly eclectic assortments of books, from children’s storybooks and Manga to criminology textbooks and traditional editions of the Qur’an.

To round out the international flavor of the book fair, and no doubt to celebrate the Charles Dickens Bicentennial, the ADIBF crowned the United Kingdom this year’s “Country of Focus.” In honor of the U.K., ADIBF brought in such acclaimed British authors as novelist Jasper Fforde, children’s author Philip Ardagh, and travel writer Tim Mackintosh-Smith, who lectured the week before the book fair at NYU Abu Dhabi. In a speech given during the festival, the ADIBF Director of Publishing Mohammed Abdulla Al Shehhi claimed that, in addition to becoming an internationally recognized destination for publishers looking for opportunities in the Middle Eastern book market, the book fair also plays a pioneering role in “promoting reading and culture and initiating dialogue and discussion without which cultural work cannot move forward.” 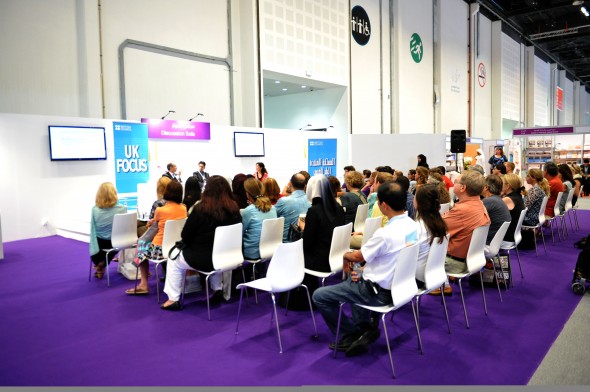 If dialogue and discussion were indeed the goals of the Abu Dhabi International Book Fair, what I saw left me with the impression that something was missing. Although the Cultural Programme’s lineup of authors clearly tried to strike a balance between British and Arab authors and artists (and even the Show Kitchen tried to couple prominent Emirati food chefs with French culinary consultants), the fair as a whole did little to put these two different literary spheres in conversation with one another. Despite the focus on the UK, English-language books were in short supply. During the Cultural Programme’s events, I sensed a divide between “Arab world” and “British expat world” talks. In their appearances at The Tent, the Arab authors I saw spoke about the Arab world, and the British authors I saw spoke about their British experiences. For example, the discussion among three British authors in “The Imagination Running Wild” never touched on Abu Dhabi or the Middle East. When a fellow NYUAD student called attention to the topic of internationalism by asking a question about the role of translation, the British comic artist ILYA responded, “I’m told my stuff is quite British. I have no problem with that. That’s where it comes from.”

Perhaps it is too much to expect British authors doing week-long tours through the Middle East to find connections between their work and the development of a literary culture here in Abu Dhabi. If, however, the ADIBF is serious about “initiating dialogue and discussion” about literary culture, then including discussions that included Arabs and other nationalities would be a good place to start.

Some discussions did manage to bring together different cultures and geographic parts of the world more successfully. One such talk was “Arab and Muslim Voices in North America”, which spotlighted James Zogby, who served a visiting professor at NYUAD during J-term. Unlike many of the British-themed programmes, where the audiences were mainly white and older, this talk’s audience (which included more than its fair share of NYUAD students) struck me as more representative of the multiculturalism here in Abu Dhabi. Tim Mackintosh-Smith’s talk on travel writing also attracted a more diverse gathering.

In the end, while I could not shake the feeling that ADIBF fell short of the international exchange and dialogue that the fair’s publicity promised, I came away believing that the ADIBF is in fact on its way to becoming a bastion of cosmopolitanism, to use the buzzword du jour. Perhaps the ADIBF could use a dose of NYUAD’s cosmopolitan formula: not only physically drawing people and ideas together from all over the world, but also pushing them to the next level of dialogue and cultural exchange. 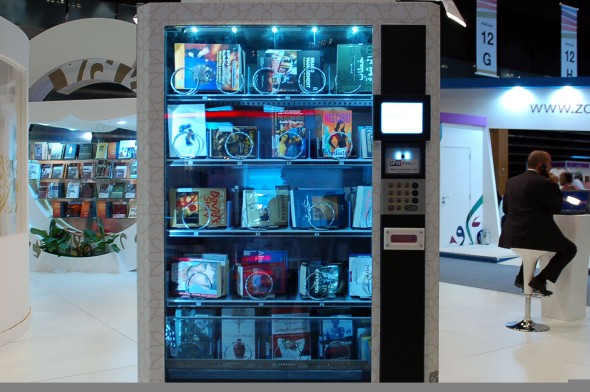 [Photos of the Abu Dhabi Book Fair by Rabha.]