An Interview with Rubén Polendo, Part I

PART I: CYCLES OF WORK

ES: How did you come to be involved in directing theater? 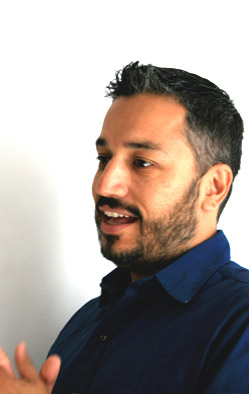 Polendo: I had  a bit of an unorthodox journey into theater. At university in the US, I actually studied biochemistry. But as I always tell my students, as a point of sanity, that every second of your journey defines your journey, but doesn’t lock you into anything. So, I studied biochemistry.  I have a knack for the sciences, and I still get very obsessed with problem-solving, anything from the most trivial puzzle to big problems that need to be solved. And I have a love for experimentation.

I studied abroad and  ended up getting myself involved with a group of theater makers. It completely changed my life. I ended up traveling to India and living there  for the better part of a year or so. And that journey enabled me to start crafting a different kind of experimentation, an exploratory procedure that has formed the core of my company. When I came back to the U.S., I went through my graduate school program and started investigating directing in a more concrete way. In the middle of that was when my company was born with the idea of experimenting with and attempting to create a whole theater experience — a theatrical experience that is rigorously visual and emotional and intellectual and spiritual. All in the same moment. And the question became, “How do you train for that experience?” That started my research, which is to investigate training methods around the world, to investigate how people train their focus, how they train their emotions, how they train their spirit, how they train their physicality. And the company, which is a permanent group of collaborators, came together in an attempt to research that, to codify it into a training methodology, and then to create work with it. We’ve been able to create two kinds of works; explorations of narratives that exist, be it a poem, a play, a musical. The other work is the creation of a non-narrative, conceptual production, that is based around a theme or a thematic idea. Death of a Salesman, for example, was such an existing narrative.

ES: What made you settle on doing a production of Death of a Salesman?

Polendo: My company tends to function in cycles of work. There was a moment when we investigated mythologies. And that was our “myth cycle” that we traveled through.

ES: What idea did you explore in the myth cycle?

Polendo: We explored the idea of fear. And then we went through this “fear cycle” to explore it more. This became part of a cycle that I affectionately call “the negation cycle.” And what it actually was, oddly enough, was me sitting with my company and making a list of all the things that our company doesn’t do and doesn’t like, doesn’t have an affinity for, or has some judgment over.

We made a long list. It was a very joyful meeting. We all laughed. “Oh, and I hate this.” “Great.” It went on the list. And someone said, “You know what I really hate? You know, I hate Eugene O’Neill. Put him on the list.” And Arthur Miller made it on that list: that‘s something Theater Mitu would never do. You know, it’s old. It’s stodgy. It had a kind of dust on it that we weren’t interested in.

Q: So why did you finally end up producing Death of a Salesman?

Polendo: Well, we really have to try and investigate the works through a new series of doorways and pathways. At the end of that “negation meeting,” I turned to the company and said, “This list has to be our next three years. Because if we sit as artists asking our audience to open and engage and grow, then why is it that we allow ourselves to be on safe territory and say, ‘We don’t grow. We don’t push.'” And we all sat there in shock looking at this list, stunned.

And then we went from “Theater Mitu doesn’t do that” to “How would Theater Mitu do that?” And we started going down that list. We explored the idea of a musical. Theater Mitu doesn’t do musicals. And so we did this incredibly radical adaptation of an American musical called Hair. Our version was all done with electronic music. It was 40 actors with shaved heads. It was completely stripped of color. And it was an exploration of freedom, of rebellion outside of the framework of 1968 America, which is what the piece is based on.

There were a couple of other pieces that we explored with similar chutzpah. Death of a Salesman became one of them. Actually, Death of a Salesman didn’t appear on our list: it was Arthur Miller. Our vendetta was with Arthur Miller. [Chuckle] We started looking at his different plays, and as we read, the plays started to influence the conversation we were having as artists.

One idea that became important was this: as you grow up and grow older, as the company grows older, what happens when you reach a point when you realize that the dreams that you have didn’t come true? Is it a moment of devastation? Or can it be a moment of hope and possibility? Is it a moment of failure, or simply another epoch in your life that you’ve entered?

So, we were having this conversation as a company, and it was both professional and personal. We’re thinking the conversation is ridiculous, but we’re also crying. And we’re finding that these questions are compellingly articulated in Miller’s work, especially Death of a Salesman. It really started entering the blood of the company. And so the play could not not be the next piece. It just had to be.

Polendo: And now, of course, are you kidding me? I love that play. I think it’s a genius play. And I’ve ended up having this mad romance with Arthur Miller. We’re hoping to do The Crucible somewhere down the line. Doing Miller really allowed us to grow and to enter a whole other conversation. And I think all of those pieces of the negation cycle have done that.

ES: We’ve heard that your working with Theater Mitu on a Hamlet project. Do you think of that as part of your exploration of fear?

Polendo: That’s exactly what it is. The project was born out of my going to every company member and asking them what it is that they would be most afraid of doing. Justin Nestor, the actor who played Willy Loman in Salesman said, “Oh, I don’t know. I wish that there was something like Medea for a man. I would totally say that.” And I’d say, “Well, you know, there’s Macbeth.” And he said, “No, that’s not the same.” And then I had a female actor, Aysan Celik, who said, “I wish there was like a Hamlet for a woman.” And I said, “Well, you know, there’s Medea.” And she said, “That’s not the same.”

And so then I sat at this meeting and, “I’m gonna announce, you know, what we’re going to work on this season.” And I said, “Medea.” And the female actor, Aysan, said, “Oh?” And I said, “And after that, Hamlet.” And the male actor, Justin, said, “Oh?” And then I said, “Except that Justin [chuckle] is gonna playing the role of Medea, and Aysan’s gonna be playing the role of Hamlet.” And the reaction was, “Oh, exciting! Terrified.”

That literally was the arc. And then it was up to them to say yes or no. And the answer became “yes.” And so Medea was born. And now Hamlet is in the process of being developed.