The second Emirates Korean Film Festival (EKFF) was held at the  Abu Dhabi Theatre over four days, from the 5th to 8th of April 2012. The opening night gala began not just with the requisite pomp and ceremony, but also with an exhilarating performance of traditional Korean music by the Dulsori Korean Troupe.

The literal meaning of “Dulsori” is “heartbeat of the land.” According to the EKFF website, the primary aim of the Troupe, which was formed in 1984, “is to rekindle the spirit of ancient festivals by sharing the inner-energy through art that can enrich our lives.” The Dulsori Korean Troupe not only performs internationally, but also conducts workshops on Korean traditional arts that are open to all age groups. Their emphasis on building “harmony and unity of community among the audience members and performers” was clearly evident in their performance – through traditional Korean string and percussion instruments, the show ranged from uplifting percussion-based performances to dramatic songs accompanied by string instruments.  Some rehearsal footage is shown below: 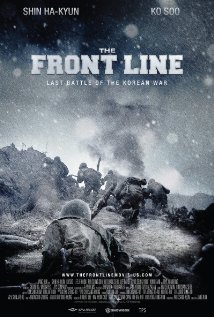 After the Dulsori performance, the screenings began with a showing of The 1st Day of Work, a darkly comic short film directed by Hyun-young Choi, followed by The Front Line, a blockbuster action film directed by Hun Jang and set during the 1953 ceasefire of the Korean War. By its end, the festival had presented seven short films, seven feature films, and one documentary. The festival’s artistic director, NYU Abu Dhabi Assistant Professor of Cinema Studies Seung-Hoon Jeong, described the EKFF as an “opportunity to look at different, often neglected, sides of Korean society and history.”

At the heart of the festival, according to Jeong, were “three social dramas that shed new light on North Korea and its people. In the backdrop of the Korean War, the opening film The Front Line represents an endless battle over a hill between two Koreas, while urging us to ask about the true nature of war and any possible mutual relationship between ideological enemies. Poongsan poses such questions with fast-paced dramatic twists around a “third” man who belongs to neither South Korea nor North Korea. And The Journals of Musan stages the miserable life of a North Korean defector residing in South Korea through the uncompromisingly realistic camera and mise-en-scène. These three films resist our typical view and expectation about North Korea, painfully portraying a utopian dream of curing the divided country’s tragedy.”

Despite the thematic centrality of North-South relations, Jeong emphasized the breadth of the festival’s selection, which included “interesting genre and art films with various colors. The closing film, War of the Arrows, was number one in the domestic market of 2011. It exhibits the fascinating power of Korean film industry with fabulous stars and special effects. Depicting a 17th-century war between Korea and China, this megahit action blockbuster could be enjoyed in comparison with The Front Line. And Blind, a unique thriller, shows a blind woman playing dangerous hide-and-seek with a psychopathic serial killer, while A Barefoot Dream, a multicultural sports drama, delivers the true story of a Korean soccer player who led a children’s soccer team in East Timor, making the poor’s big dream come true. In addition, cinephiles would not want to miss Arirang, a total independent film diary of the maverick director Kim Ki-duk. Completely isolated from Korean film industry, he tells his life and work, dream and trauma in this self-portrait that desperately seeks spectators.”

The EKFF was not limited to film showings, however, hosting a number of workshops led by professors from NYU Abu Dhabi. Leonard Retel Helmrich, Associate Professor of Practice of Film and New Media, an award-winning documentary filmmaker, led a workshop entitled “What is Single Shot Cinema?” NYUAD Visiting Assistant Professor of Interactive Media and Technology Shawn Van Every led the “Mobile Phone Filmmaking Workshop” as a tie-in with the screening of Night Fishing, a 30-minute fantasy-horror film by the Park brothers, Chan-wook and Chan-kyong, according to Jeong, “the world’s first film shot entirely by iPhone4.”

Coinciding with the EKFF was the Mugunghwa Cultural Festival, held at the Abu Dhabi Theatre Park. Named for the Korean national flower and presenting events such as Korean name painting, traditional tea ceremony, Korean traditional dress portraits, clay art and Korean games, the Festival sought to showcase traditional Korean culture, rather than the Korean pop culture of music and TV dramas that seem to have inspired the formation of university Korean clubs in the UAE. Day Three brought the Mugunghwa Kids Festival, which presented such programs as Dulsori drum workshops, learning to write in Korean, Tae Kwon Do demonstrations, and animation workshops — all geared towards children. Perhaps the biggest hit with those in attendance at the festival, however, were the Korean food tasting events. Korean restaurants from Dubai temporarily migrated for the occasion, bringing with them the necessary ingredients and chefs to cook up buffet feasts of bibimbap, kimchi, and other Korean side dishes, as well as rice cake, glass noodles, and Korean BBQ.

Despite the long list of imposing names of supporting institutions, the EKFF was very much a grass-roots effort. Although initially suggested by the South Korean Embassy in Abu Dhabi, it was born from the initiative and effort of young Emirati women, students belonging to the Korean clubs of various universities in the UAE. Yes, Korean clubs – to be precise, the Korean Clubs of Abu Dhabi Women’s College and Zayed University, as well as UAE University’s Arirang Club and Khalifa University’s Han Club.

Both these young women asserted these goals passionately on the stage of Abu Dhabi Theatre during the opening night gala to an audience of Korean expatriates, Emiratis, and guests of honor. Among these guests was His Excellency Habib Al Sayegh, Director-General of the Sultan Bin Zayed Centre for Culture and Media, whose keynote address emphasized the same themes, with promises to continue support in developing “deeper and bilateral mutual understanding” between the UAE and the Republic of Korea.

Both the UAE and the Republic of Korea have vested interests in strengthening their relationship. According to these opening night speeches, the Festival is being planned as an annual event, so we can look forward to another Emirates Korean Film Festival sometime next year.

The Journals of Musan

War of the Arrows