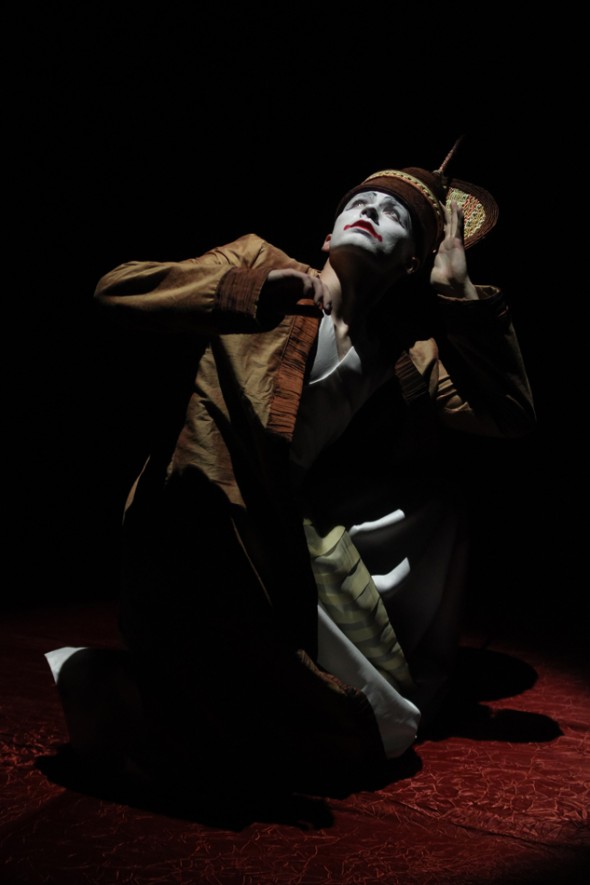 In March, New York University Abu Dhabi presented its first student production, an adaptation of The Ramayana by director Rubén Polendo, at Abu Dhabi’s Manarat al Saadiyat. The production was staged in collaboration with Polendo’s New York-based company, Theater Mitu. In Spring 2011, Theater Mitu presented an adaptation of CHAOS (inspired by the Short Stories of Luigi Pirandello, the film Kaos by the Taviani Brothers, and the dance piece Kaos by Martha Clarke) on the Abu Dhabi Corniche beach; last fall, the company staged Arthur Miller’s Death of a Salesman at NYUAD’s Downtown Campus.

This is the first of several pieces that will be devoted to an exploration of Polendo’s work with NYU Abu Dhabi and Theater Mitu.

ON ADAPTING AND RETELLING

[Program Note for The Ramayana by Rubén Polendo]

The Ramayana is one of Hinduism’s two sacred epics. It is one of the longest poems ever written (in its most common form, roughly 16 times longer than The Odyssey and The Iliad combined; in its longest form, roughly 25 times longer than the Christian Bible). The manifestation of this poem into a theatrical form involved the funneling of the hundreds of stories within The Ramayana. The goal was to focus on the journey of Rama and Sita within the epic. In so doing some stories were fused with others: while some characters are in reality an amalgam of several characters from the original poem. This serves in both keeping the story focused and forming an attachment with the characters. It is here where a “retelling” of the story occurs. After reviewing many translations, Wayang Kulit plays, Nepali Charya Nritya narratives, Sri Lankan Ritual and Kathakali Dance Dramas of The Ramayana, I have focused on the story I believe The Ramayana holds. The approach has been spiritual, yet not theological; it has been specific, yet not anthropological; above all it has been mythological. The piece is explored in the framework of Joseph Campbell’s myth as a shared human dream. In so doing I have gone deeper into some of the characters and have imagined their journey. Though the story of The Ramayana is most definitely within this play, the emotional journey of the characters is an imagined one. Such an amazing and wise text as that of The Ramayana holds so many stories within it, that I would hesitate to call this a definitive interpretation of the epic. Instead it is simply my retelling of the story that is The Ramayana.

DOCUMENTING THE MAKING OF THE RAMAYANA

Two NYUAD students, Ayaz Kamalov and James Hosken, are completing a documentary film about the process of bringing the Hindu epic to life onstage in Abu Dhabi. Electra Street spoke to Kamalov and Hosken about their film. The interview was conducted by Norina Miszori, with assistance from Brook Fowler and Zahida Rahemtulla.

ES: In the past year, NYUAD has already begun to establish a presence in the theatrical scene of Abu Dhabi with productions such as Chaos and Death of a Salesman. What distinguishes The Ramayana from these?

Hosken: The Ramayana is specifically a student production. During our interview with Rubén Polendo, director of the NYUAD theater program and artistic director of Theater MITU, he defined a student production as a production done by a university, directed by a faculty member or external person, with student actors. If you look at Chaos, there were student apprentices but MITU actors, whereas The Ramayana’s cast only included student actors.

ES: I know you filmed every aspect of The Ramayana, both pre- and post-production. With so many different types of footage, what is the focus of the documentary?

Hosken:  Before we had defined anything about the documentary, we decided to see where the raw footage would naturally lead. So we entered with only the vaguest of vague ideas of how the final product would look. We hoped that as the rehearsal process went on, something would emerge. The problem we encountered was not that nothing emerged, but that everything emerged.

ES: What do you mean when you say “everything emerged’?

Hosken: I mean, we could do a documentary on any aspect of the process — we could take the perspective of the director, the students, the apprentices — and it would be compelling. What we finally decided on was an interview-based documentary about the actor’s journey in The Ramayana. That is the perspective we are currently taking. Again, the final draft may be completely different.

Kamalov: What we can say about this piece for certain is that we are not creating a “making of theater” documentary. The piece is about “the Ramayana experience.”

Hosken: We are trying to capture the essence of the show instead of literally portraying it. This is quite difficult since the final cut will be 15 minutes.

ES: Besides the time frame, what were some of the other challenges you faced?

Hosken: We are still in the process of editing, but both Ayaz and myself have things that we hold dear to us. Any filmmaker forms an attachment to what he shoots. Ayaz will want to include his footage, I will want to include mine. There is then a difficult conversation that must happen, in order to keep with our vision of the documentary, and in the end, we do have to let some things go.

ES: What do you hope the audience will take from your documentary?

Kamalov: The whole idea of the documentary is to show the audience the process the cast went through. As for audience engagement, the purpose of any documentary is to give a critical distance. The audience should not view our documentary as a retelling of The Ramayana, but as an insight into the work that was done, and why.

Hosken: When thinking about the audience, we want to create something that a person completely detached from NYUAD could see and understand. Before our final cut, we are trying to get someone completely removed to screen it, to see if it makes sense, and if it can stand alone as a piece about the production. We are trying to create a self-contained story.

[Photo: Yannick Trapman-Obrien as Rama in NYUAD’s production of The Ramayana. Photo by Jack Dixson.]