The State of Sustainability in Abu Dhabi 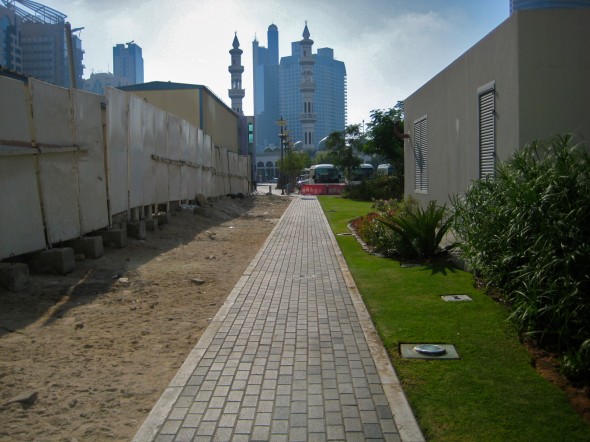 A few weeks ago, I was faced with the prospect of packing my life into two suitcases and two storage boxes. One years’ worth of belongings seemed manageable until my roommates and I began confronting the miscellaneous junk I can only refer to as the debris of everyday life. Water bottles and milk cartons were stacked neatly along the countertops, old jam jars had been re-purposed to hold a mix-matched jumble of utensils, and the plastic grocery bags we had promised to “reuse as trash bags” piled up in the cabinet under the sink.

Next to the piles of plastic on the kitchen counter was a souvenir from last month’s meeting with H.H. Sheikh Abdul Aziz al Nuaimi of Ajman (colloquially, the Green Sheikh), which was held at NYU Abu Dhabi in order to discuss the ways in which he could collaborate with students and faculty. The Sheikh was enthusiastic about working with students, and praised them for taking the initiative to improve the community. His support and willingness to engage is admirable, as is his work with the Emirates Wildlife Society, World Wildlife Fund, Plastic Pollution Coalition, Ecoffee, the Al Ihsan Charity Center, and other organizations. Under his direction, Ajman has recently placed a ban on plastic bags—a progressive move even in the US—and yet at the conclusion of our meeting, I was very politely handed a bright green plastic money bank, shaped like an apple and wrapped in a sheath of cellophane.

Attempting to understand the state of sustainability in the United Arab Emirates is a difficult task, as illustrated by this plastic-wrapped plastic apple. Information about sustainability in the UAE is contradictory: the government insists that they recognize the severity of the nation’s unsustainable practices and are taking action to lessen their environmental impact, but the results of these supposed efforts are not often evident.

“We have a lot in common,” the Sheikh says, “simply because we are people.” He has been all over the world—most recently to Japan and Antarctica—advocating for a sustainable future. Back home in the UAE, however, the situation still needs some work. The average Abu Dhabi citizen uses 550 litres of water every day, around four times as much as the average European. About a quarter of this water, according to the United Nations Food and Agriculture Organization, comes from desalination—a costly process that covers most of the UAE’s municipal water use—while over seventy percent of the water used in the Emirates is primary groundwater. Groundwater supplies are being depleted faster than they can be replenished, but desalination, seen by some as a solution to the country’s water scarcity, poses serious economic and environmental issues as well. Anthropologist Steve Caton likens the salt waste produced by desalination plants to nuclear waste, based on how difficult it is to dispose of. Most, unfortunately, ends up right back in the ocean, increasing the already higher-than-average salinity in the Arabian Gulf; if dumped in the desert, however, the salt would eventually seep back into underground aquifers, polluting the nation’s groundwater supply.

Water, unfortunately, is only one of the UAE’s many excesses. According to the World Bank, electricity consumption in the Emirates is 11,463.63 kilowatt-hours per capita, or about four times as much as the world average; per capita energy use and CO2 emissions are both nearly five times world average. Although the government began issuing “Green Utility Bills” in March, indicating whether residents’ consumption of water and electricity is “ideal-average” or above “ideal-average,” both resources remain un-incentivized. Waste, too, poses problems, as evidenced by the heaps of plastic cluttering my kitchen. Despite campaigns in the last few years aimed to educate Abu Dhabi residents about recycling, most of the waste collected (a total average of 2 kilograms per person per day) merely sits in a separate area of the Al Dhafra landfill, with plans “to build a full sorting and recycling plant in Abu Dhabi in the future,” according to Saif Al Shamsi, senior manager at the Centre of Waste Management (an organization created in 2008).

Rapid growth, in addition to causing wasteful consumption, has put many of the country’s coastal ecosystems in danger. Loss of mangrove forests due to shoreline construction and dredging has created cause for concern about some of the UAE’s endangered reptiles, birds, and other marine animals, like the blue and white collared kingfisher, a species that has recently received attention in The National due to proposed construction in Sharjah that threatens to destroy large stretches of the kingfisher’s mangrove habitat. The hammour, an endangered fish, is still served in many hotels and restaurants around the UAE. In Dubai, government-owned development company Nakheel took over the coast with the Palm Islands and The World, manmade island projects built from a total of 452 million cubic meters of sand and rock, much of it reclaimed by dredging. Despite the company’s “sustainable vision,” branded under the name “Blue Responsibility,” the Palm Jumeirah Island was built atop a fragile coral reef. Nakheel justifies its construction with “the creation of a 550 hectare reef on which corals and a biodiversified eco-system has grown.” Five hundred fifty hectares is relatively small (5.5 km2), and this artificial reef, while potentially successful at attracting high numbers of fish and coral, will nevertheless create a much different ecosystem than a native coral reef.

The environmental situation in the GCC is not hopeless, however. The Living Planet Report, a global sustainability summary published biannually by the WWF and most recently released on May 15, announced that, for the first time since 2000, the UAE did not set the record for worlds’ highest ecological footprint. This year, at just over 8 global hectares demanded per person, the UAE places third behind Qatar and Kuwait (at nearly 12 and 10 hectares, respectively). In the last report, the UAE clocked in at almost 11 global hectares demanded per person, most of it due to carbon emissions. Perhaps the UAE has reached its peak of unsustainable growth and is now truly committed to environmentalism. Future land reclamation projects in the spirit of the Palm Islands and The World have been put indefinitely on hold and green building codes are being implemented in new construction projects, while awareness campaigns about recycling and utilities usage are erupting throughout schools and neighborhoods and the country has begun looking towards alternative sources of energy. The UAE certainly has a long way to go and many things to improve before it can be considered “sustainable,” but so does much of the world.

The UAE is not a place with abundant natural resources—Abu Dhabi, in an emergency, could only supply water for two days before running out. There isn’t much in the way of water, vegetation, or wildlife, but what we have, we must learn to conserve. Though on a day-to-day basis it can feel that sustainability in the UAE is a lost cause, conversations like the one with the Green Sheikh in April suggest that people in the region are beginning to think seriously about “big picture” sustainability in ways that most Westerners are not. NYUAD student Charlotte Wang sees environmentalism as a global challenge because “it’s such a nebulous thing. At the most basic level, we can ask people to recycle, to minimize their use of plastic, to conserve water and turn off the lights when they leave a room; but what we’re really talking about are these huge, overarching systemic issues like climate change or resource scarcity.” Perhaps the UAE will learn to lead the way in solving these issues, inspired by the naturally harsh climate and precarious dependence on oil lending urgency to their search for solutions. At the moment, however, though the region’s developing discourse is focused, action is slow to follow suit. Wang emphasizes that while “it can feel like there have been no real changes made…I think we’re all hoping that these conversations will carry over to changes in the future, that they’ll be a jumping-off point for more sustainable practices.” Back in my room, I think about April’s meeting, full of people committed to finding “green” solutions to the environmental crisis, and pack the well-intentioned souvenir into a storage box, hoping that at very least the apple is made of recycled plastic.