Frankenstein at the Movies 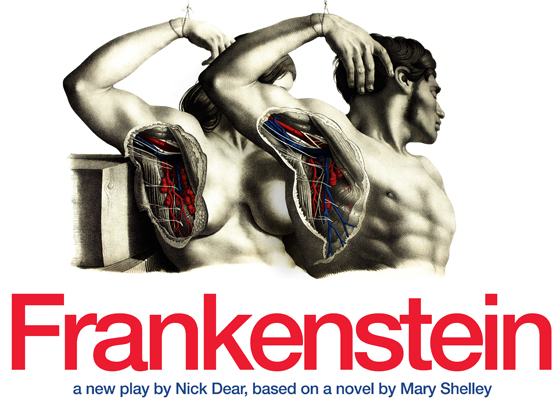 When I entered the theater to see director Danny Boyle’s production of Mary Shelley’s Frankenstein at the beginning of June, it smelled like artificial butter, the lighting was poor, and my feet were unceremoniously shoved into a pair of raggedy black flip-flops. If that’s not exactly what one would expect upon entering London’s prestigious National Theatre, it’s because my sandals carried me, not through the doors of the National Theatre, on the south bank of the Thames, but into the Palace 9 Cineplex, in the bustling metropolis of South Burlington, Vermont, USA.

This witchcraft was accomplished thanks to the National Theatre Live program, through which the theater broadcasts its performances live to cinemas across the English-speaking world. Their productions are not only beautifully staged and beautifully executed, but also beautifully filmed. Despite some camera angles that you wouldn’t experience at live theater, I didn’t feel as if I were at a cinema, but seated in the best possible seat in the whole of the National Theatre.

National Theatre Live, however, lacks the bravado of a live production, where even the audience is practically part of the show. The first and only time I was lucky enough to attend an opera at Lincoln Center, I was seated next to a delightful elderly gentleman who wore a top hat and offered to let me share his opera glasses. At Palace 9, however, which was mostly filled with ordinary popcorn-munching Vermonters in khaki shorts, top-hatted gentlemen were scarce. The quick pan of the National Theatre audience, at the start of the film, did not create the velvety fog of drama that envelops any theater after the house lights go down, and before the stage lights come up. And despite the excellent filming, I felt distant from the actors. One of the advantages of live performance is the way that the energy of the audience syncs with the energy of the performers — my relationship to Danny Boyle and the National Theatre, on the other hand, was entirely one-sided. I was lucky to be witnessing this production without a plane ticket to London, but it did not feel like a “theater experience.”

The show played twice, though I was only able to secure tickets for the first night. Benedict Cumberbatch, of BBC Sherlock fame, starred opposite Jonny Lee Miller (who, oddly enough, has recently been cast as Sherlock Holmes in a CBS television series called Elementary, airing in the fall) in this adaptation by playwright Nick Dear. On night one, Miller took on the role of Victor Frankenstein, while Cumberbatch played his monstrous creation. Here’s the twist: on the second night, they swapped roles.

Though I missed the role-reversal, which happens every other night they perform the piece, I could see elements of the monster in Frankenstein, as an unsettling laugh, a crazed, hungry look, or a certain twitch of the jaw recalled the monster’s uncertainty and awkwardness as he navigated the world of the living. It was more difficult to find Frankenstein in the monster, but – true to Mary Shelley’s novel and unlike in many film adaptations, where the monster’s only job is to grunt and drag his feet, arms outstretched before him – some of the most eloquent, heartbreaking speeches came from The Creature. Miller and Cumberbatch had brilliant chemistry, a product of their experience playing, as Boyle says, “two strands of the same part.” 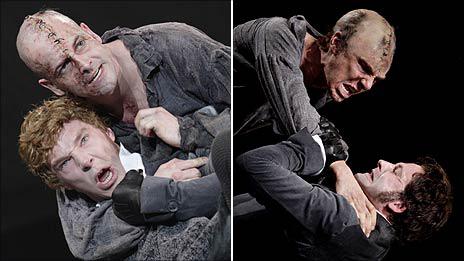 Benedict Cumberbatch as the doctor and Jonny Lee Miller as the creature — and vice versa.

I felt after this performance as I had felt after reading the novel for the first time, struck with how much more there is to the story than just cheesy monster horror. It’s a nuanced and beautiful story, and Dear’s adaptation is elegantly pared-down from the original. The frame of the story, the begin-at-the-end set up with the adventure boat in the Arctic, is gone, as are a few key characters from the book – no Justine, no Henry Clerval. Gone, too, is Elizabeth’s backstory and Victor’s mother’s dying wish. Somehow, though, the alterations in this retelling seemed simply to concentrate its meaning, rather than remove anything absolutely essential.

Added are a few wordless scenes that are exquisite in theatrical translation. The play opens with the monster’s “birth”: alone, he struggles out of a womb-like enclosure and, alone, he figures out how to use his limbs. Soon after, before his human corruption and loss of innocence, we see him shrieking in delight at sunlight, grass, and birds, happy simply to be alive and feeling. In a most chilling twist on the original, the monster’s final act of vengeance against his creator is to rape and murder Frankenstein’s new bride, after which he runs off with the cry, “Now I am a man!” Absent from the book, the rape scene plays at underlying cultural assumptions about gender, wherein “manliness” is determined by sex and violence. And by killing Elizabeth, the Creature destroys “someone … perfect,” a kind woman who wishes to experience the world. More than Frankenstein, the Creature suffers the greatest tragedy in losing this voluntary friend and mother figure. Without Elizabeth, the Creature is left with the tragic assumption that humanity rests on “how to ruin, how to hate, how to debase, how to humiliate … how to lie.”

These gender-related themes are among the many subjects that bubble to the surface of this contemporary retelling. Perhaps Dear’s decision to stay faithful to Shelley’s essence in a drastically different form is a further reflection of today’s cultural zeitgeist. This is an age where Oprah’s last book club read a revamped edition of Charles Dickens’s Great Expectations, where TV dramas like the BBC’s Downton Abbey and Cumberbatch’s own Sherlock dominate air time, and saucy film adaptations of novels like Leo Tolstoy’s Anna Karenina and F. Scott Fitzgerald’s The Great Gatsby are shaping up to be big blockbuster hits. This is the age of the period piece, of the online sophisticate, where anyone can be a film critic, book reviewer, or twitter philosophe. It’s an era in which high-brow literature mixes with lower-brow social media, special effects, and attractive actors.

We could see National Theatre Live as culture for the masses – one doesn’t need to be a worldly London urbanite to see Mary Shelley’s words come alive via Nick Dear, Danny Boyle, and Benedict Cumberbatch. In researching the piece after the show, I found zillions of tumblr posts devoted to the production, mostly from young teen girls who raved about the performance and were sending away for Amazon copies of Dear’s script. Sure, they may initially have been motivated by the promise of Cumberbatch or Miller in scant clothing, and a good number of the posts involved strings of exclamation points or OMGs, but many also used it as a platform to discuss the theatrical aspects of the performance, to perform detailed character analyses, or simply to marvel at the beauty of the words and acting. As I read, their posts belied their age and apparent maturity level to reveal the border between fandom and intelligentsia, blurred.

With this “democratization” of art and technology has emerged a desire for intellectual and artistic refinement. The Internet is overrun with photographers, foodies, street stylists, filmmakers, and “curators” (aggregate sites that act as museums of the Internet). We, like Frankenstein, are enthralled with the powers of technology. Yet we also, like the Creature, are both drawn to and repulsed by the technological society that surrounds us. Frankenstein’s monster wants so much to be a part of humanity, technology and all, despite the way it ruined him, but he is also captivated by the power of language and beauty. He philosophizes. He reads Milton. He describes love more wonderfully than Frankenstein ever could: “it feels like all the life is bubbling up in me and spilling from my mouth, it feels like my lungs are on fire and my heart is a hammer, it feels like I can do anything in the world! Anything in the world!”

Frankenstein’s creation acts as a mirror for his own humanity, exaggerating and accentuating his shortcomings and showing that in some ways, the monster is better than he is. In that way, the Creature created by Nick Dear, Danny Boyle, Benedict Cumberbatch, and Jonny Lee Miller is a reflection of its contemporary audience, continuing – like those tumblr tweens – to blur the boundaries between society’s common technology-consumed masses, and its traditionally accepted forms of high art. In the theater with me when the credits roll is a microcosm of Burlington, the town where I grew up. I see University of Vermont professors and college students; a group of thirteen-year-old girls; a family with two younger kids, fighting over their remaining popcorn; a pair of actors; a woman with a huge head full of dreadlocks; an older couple, exiting the theater arm-in-arm; a few couples on dates; a man with a tattoo of a dragon snaking up his tricep; and plenty of other ordinary people, all looking happy and most in conversation.

My dusty flip-flops fit in here. This is not a show made for intellectual elite, nor will it be the next great action or romance film, but here, at the Palace 9 Cineplex, we ordinary people all had a little bit of both.