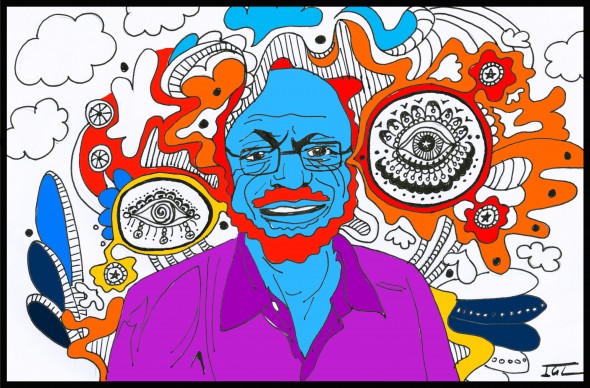 “He’s a feminist,” my companion said about Indian filmmaker Shyam Benegal. We were walking back from a screening of Sardari Begum. She paused then and turned to Dr. Anuradha Needham, a professor of English at Oberlin College whose work centers on Benegal’s cinema. “Does he know he’s a feminist?”

The answer Dr. Needham gave, and possibly the most interesting thing about Benegal and his films, was something along the lines of “We can’t really tell.” The screening was part of a weekend-long retrospective celebrating the legendary Indian New Wave filmmaker and his work. Hosted by NYU Abu Dhabi in collaboration with the Indian Film Society of the UAE, the Kerala Social Center, and the Embassy of India, the retrospective highlighted three of Benegal’s films, popularly known as the “Khalid Mohamed Trilogy”: Mammo (1994), Sardari Begum (1996), and Zubeidaa (2001), all written by Indian screenwriter  Khalid Mohamed about members of his family.

The films feature eponymous women from respectable middle-class Muslim families whose personal ambitions clash with the traditional expectations of their families and society. These strong, expressive women are set among scenes of domestic middle class Indian life, as their emotionally charged narratives progress largely through posthumous flashbacks. A far cry from the superficial glitz of typical Bollywood cinema, Benegal’s films explore issues of caste, religion, and gender, weaving in stories of Partition and subtly pointing to repressive social conventions. Rather than serving as blatant political statements, the films in this trilogy go only as far as to raise questions, such as, What is the place of a respectable Indian woman? Should religion be a determining factor in marriage or citizenship? Can a woman be invested in both career and family? Is living on the fringes of society necessarily a bad thing? Benegal only hints at answers.

The subjects of his films suggest the director’s feminist tendencies, and in the hands of a less skilled filmmaker might make for controversial clashes with authority or the mainstream. His delicacy in raising these points, however, changes what could be in-your-face activism into cinema that leaves its audience with the kind of burning questions that beg long-term meditation. Though Benegal reveals the hardship certain women face under pressure of traditional class, religion, and gender constructs, he does not vilify mainstream society. His nuanced portrayals and absence of hardline political philosophy make it difficult to discern his personal views; his cinema raises questions, but doesn’t take sides. 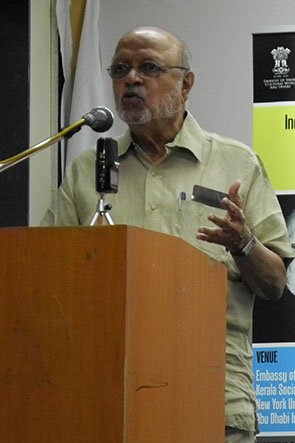 Not only did I enjoy each film individually, the full immersive experience of a retrospective weekend helped to set them in context within the broader themes of Indian cinema, politics, and feminism. Sardari Begum, the second film screened, was preceded by a talk on secularism in Indian cinema by Benegal himself, and the last day featured a master class with Benegal for fifteen NYU Abu Dhabi students, as well as an open conversation and lecture with Dr. Needham, Benegal, and Dr. Rajeswari Sunder Rajan, a visiting professor of English from NYU New York.

But it wasn’t just the films and lectures that were instructive. Strings of introductory speeches became almost humorously redundant, but they revealed IFS-UAE’s enthusiasm for exposing Indian cinema to the Emirates, and the excitement from all involved about bringing such an important figure to Abu Dhabi. Their efforts at bringing culture to the city on a small community scale are commendable, and among the first I’ve seen since arriving in the emirate. The informal set-up of the Kerala Social Center, where two of the screenings took place—the audience seated in plastic lawn chairs, the film played from a laptop and projected onto a white background, and bits of leftover tinsel studding the walls—made some feel as if they were back in India. Motherly women serving up hot samosas, IFS-UAE representatives urging me to “eat more!”, and energetic children running up and down the aisle gave me a feeling of inter-generational community I rarely experience as a university student.

This sense of community was a recurring theme that weekend, as I began to recognize familiar faces and chat with those attending multiple events. Benegal’s films served as basis for discussion among the audience both before and afterwards, leaving many of us collectively grappling with his open queries long after the credits rolled.