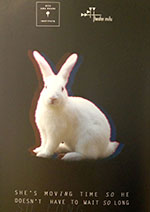 Rubén Polendo’s Theater Mitu is once again taking the theatrical spotlight in Abu Dhabi. Following up their successful adaptations of CHAOS and Death of a Salesman, the company is turning its eye to the work of Swedish playwright August Strindberg. In collaboration with students from the NYU Abu Dhabi Theater Program, Polendo and Theater Mitu are re-presenting Strindberg’s 1901 drama A Dream Play in an innovative light.

“This show is defined by the lack of a single-line story structure,” says Brook Fowler, the production’s assistant director. “It is structured much as a dream, but one that you can follow. It is weird and conceptual, but creates a strong impact. It’s like nothing Abu Dhabi has seen before.”

With no theatrical guidelines and no elaborate history of theatrical performance in the region on which to rely, Theater Mitu is in the challenging position of literally setting the stage for theater in Abu Dhabi. Assistant director Amani Alsaeid, who has witnessed the development of Theater Mitu’s work in Abu Dhabi from the get-go in 2010, describes the emerging presence and role of theater in the region: “Gulf Theater is mainly either comedy or kid’s theater. I myself have not witnessed much quality in Arab theater. The Syrian, Egyptian and Lebanese theater in the recent past has been more a platform for political statements.”

“What’s really crazy,” Alsaeid continues, “are the changing dynamics of the population in the region. Before, if you lived in a certain circle, theater was not something to consider attending. I had never been to theater before I came to Abu Dhabi. Before it seemed weird to go to the theater … it just was not something … to do. But I think people are changing, and now there are more companies coming over to the region.”

Theater Mitu takes an “experimental” rather than a “traditional” approach to theater. Polendo and his colleagues use a variety of different methods in their productions to address the pressing question of what theater should be and what it should do. And what it should not do.

In A Dream Play, the company uses lighting as a way of representing different layers of dreaming and investigating how people manage the different realities in which they live. Alsaeid lit up when we asked her about the video projections and lighting: “They are amazing! The video projections will be clear enough to add to the magic of the play, but subtle enough so that you don’t notice it either. So it’s very mysterious and sexy!”

We asked Nikolai Kozak, who worked on the production’s design and oversees its use of video, to tell us a bit more about this aspect of the staging. “The video design is worked into the play in ways that I think will surprise a lot of people, because its something that’s still relatively non-traditional and somewhat experimental. It’s going to be an amazing surprise when people walk in and suddenly see the stage come to life.” In a nutshell, according to Kozak, A Dream Play is a dream production for the actors and designers, because “it’s about everything being human involves. From love to sorrow to happiness and to an exploration of the human mind and how we work and how we dream and how those dreams interact with our lives. It’s tremendous. It’s all encompassing.”

Kozak claims that A Dream Play is much more “introspective” than the previous Theater Mitu productions in Abu Dhabi.  He speculates that “as the company gets more involved in Abu Dhabi, the more it wants to begin exploring subjects that are much more related to the psyche of the people. What drives people? How do people deal with their realities? A week after watching the show, when you reflect on it, you will realize how informed the play is about the realities that exist here in Abu Dhabi.”

A Dream Play is “plot-driven,” says Kozak, but, like all dreams, “it’s strange because suddenly you wake up in Abu Dhabi, when seconds ago you were on a street in your hometown, with a huge bunny-shaped balloon floating outside. Then there’s a car with three wheels driving by. It’s because when you wake up, you’ve incorporated all these other dreams into one big idea. That’s how a dream play functions. You have all these smaller dreams that are all crossed by a narrative line and that make a big idea. It’s truly something I can’t explain — something that you can’t envision until you see, much like a dream!”

You can see it for yourself at NYUAD’s Downtown Campus. Tickets are still available for the performances on October 17 at 8:00 pm and October 19 at 2:00 pm. Click here to make reservations.

Theater Mitu’s production of A Dream Play is presented in collaboration with the NYU Abu Dhabi Institute.