Talking About Life of Pi

“I have a story that will make you believe in God,” an elderly man promises to the fictional narrator of Yann Martel’s fantasy adventure novel Life of Pi.

So begins the story of Pi, who survives being stranded on a lifeboat for 227 days with a Bengal tiger as his only companion. This passage also began “Abu Dhabi Reads,” the inaugural communal reading event sponsored by Electra Street.

On November 1, the NYU Abu Dhabi campus transformed for the evening into a reader’s paradise as more than seventy members of the Abu Dhabi community congregated to discuss Martel’s Life of Pi.

It was a beautiful night under the soft haze of the campus lights and the setting sun, away from the hustle and bustle of the city. The five people chosen to start the conversation – of whom I was one – read passages from the novel that they had found particularly provocative, and then posed questions for the rest of the group about everything from whether religion is a cage and whether the story really makes us believe in God, to the importance of re-reading a text and the meaning of the novel’s surprisingly complex ending.

With these initial comments to mull over, the next hour and a half belonged to the audience, who shared their own thoughts and responded to others’ observations on the novel. Looking out at the audience that night, many of whom were holding copies of Life of Pi in their hands, I felt closer to my fellow bookworms in Abu Dhabi than I ever had before. It was as if we were all afloat on the lifeboat of the novel, sharing our experiences as we rowed to shore. 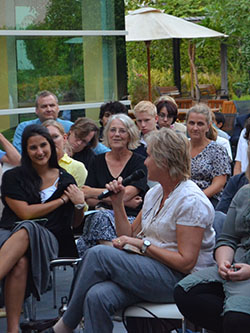 I am what you could call a veteran of community book reads. The California town where I grew up hosted a similar event every year, and every year I would diligently read the book. Annotated book in hand, I and others like me would flock to the local town hall to discuss and dissect together. If anything, those discussions taught me that reading is much more than a private experience between the reader and the book. Reading can in fact be equally rewarding and stimulating when it is shared and discussed among people – part of the power behind “one book, one community” initiatives like “Abu Dhabi Reads”. (You can read more about community book projects at the United States’ Library of Congress page here.)

These thought-provoking discussions that I now believe made me love reading in the first place came to mind again at “Abu Dhabi Reads,” as I listened to the audience members on the lifeboat with me engage the text and one another in discussion. Many loved the book, some hated it, and a handful confided in me that they had not yet read it. Still, everyone in attendance loved reading for the sake of reading, a fact that became clear evident in the discussion. After all, only book-lovers could begin a conversation with the symbolic role of cages in the text and somehow end up debating, “What is truth?”

At the same time, as much as I was reminded of my experiences from past community book reads, “Abu Dhabi Reads” was uniquely the product of Abu Dhabi. When we heard the call to prayer, we paused in the discussion for a few moments, and some members of the audience took the opportunity to pray while others reflected on the discussion. In that moment I was struck by the diversity of the audience, which included both students and faculty, expats and Emiratis, English and non-English speakers. That brief pause in the discussion captured the spirit of “Abu Dhabi Reads:” this eclectic group from all corners of Abu Dhabi had banded together to celebrate reading.

After the fictional narrator is told that Pi’s story will make him believe in God, he says, “That’s a tall order.” Without skipping a beat, the elderly man lobs back, “Not so tall you can’t reach.” Building a community around book-reading no matter where you are can sometimes feel like a tall order. But if the first “Abu Dhabi Reads” is any indication, it’s not such a tall order for Abu Dhabi.

For those who missed the inaugural “Abu Dhabi Reads,” never fear. This event may have been the first, but it will certainly not be the last. If you are interested in joining our reading community, Electra Street welcomes any suggestions of books for the next “Abu Dhabi Reads,” set to take place in spring. Please post suggestions to the comments section of this post or send an e-mail to electra.nyuad@gmail.com.