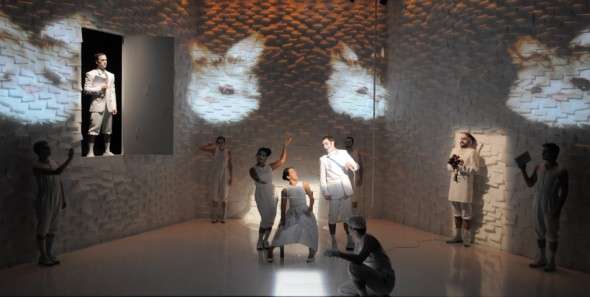 “As an intensely collaborative and inherently local art form, the theater offers a way of creating community.” So states the NYU Abu Dhabi website. But it turns out that creating community is a tricky business: where to start, and how? Conversations pave the way, but sometimes conversations can be difficult to initiate.

Theater, however, can be a wonderful way to begin that dialogue. Abu Dhabi is a city that does not easily engage in conversation, but lately it has begun to engage with theater. In the past few decades, the government has built numerous theaters, including the magnificent Abu Dhabi Theater on the breakwater. More recently, the government has invested money in touring companies like the Bedouin Shakespeare Company as well as in institutions like NYU Abu Dhabi, which brings theater and drama with it as part of its educational mandate.

These past few months have seen three productions open to the general public: Theatre Mitu’s A Dream Play at NYU Abu Dhabi, Resuscitation Theatre’s Playboy of the Western Region at Café Arabia, and a musical adaptation of the story of Pinocchio for children at the National Theater. These productions seem so incongruent alongside each other that it is difficult to imagine what kind of community could be created from such a mélange of styles and stories. Regardless of history or aims, however, each of these productions changed the landscape of theatre in Abu Dhabi and, in some small way, is contributing to the shape of the city’s community and its cultural life.  Theater Mitu, in particular, offers an interesting way to think about the role of theater in the creation of both a theater-going culture and an ongoing, city-wide conversation about the experience of performance and art.

Theater Mitu is a professional theater company based in New York as well as Abu Dhabi. Its artistic director, Rubén Polendo, heads the Theater program at NYU Abu Dhabi and has been involved in the development of the arts curriculum at the university. Like all of the faculty at NYU Abu Dhabi, Polendo has faced the difficulties of building a program from the ground up, a process complicated by the fact that NYUAD is a “global university” situated in a cosmopolitan city. Eng-Beng Lim, in “Performing the Global University,” writes that the “ramifications” of faculty decisions may be “monumental for liberal arts education as a whole in the coming decades.” Polendo faces the additional challenge of “contextualizing theater and performance studies within the global university.”  In other words, the NYUAD theater program must situate itself not only within the confines of the university but also within the city where the work is performed.

Thus the publicity surrounding Theater Mitu productions means that their performances are seen as representative of NYU Abu Dhabi, just as all theater productions in the city are seen as representative of the city as a whole. A Dream Play had to perform two roles: both immediately as a production of NYU Abu Dhabi, but also as a feature of Abu Dhabi’s cityscape. The success of Theater Mitu’s various productions marks not only an appetite for theater in the city, but also a genuine enthusiasm for the dramatic arts. Theater is a defining art form, and Abu Dhabi as a city has not shied away from this definition. 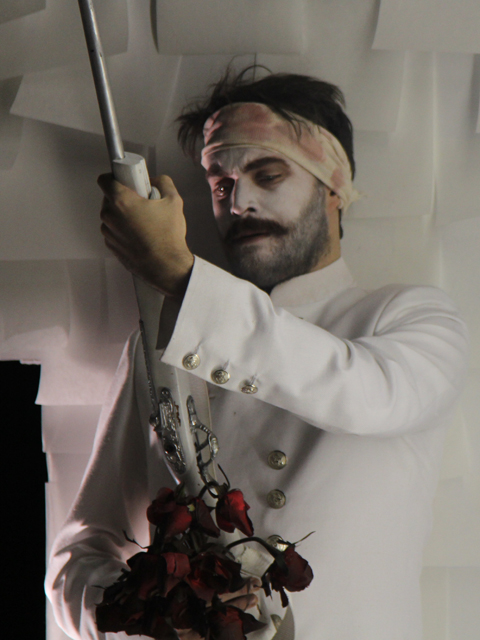 Abu Dhabi seems to want theater, but not necessarily theater that “speaks to Abu Dhabi” or “tells the Abu Dhabi story.” The contextualization of theater that Lim describes does not mean that all plays performed in Abu Dhabi need to be set in or be about Abu Dhabi. But any show produced in the city must be aware that it is at the vanguard of the theater in this city. Theater is a powerful force for the development of a community, and every play will have an effect. That responsibility is not to be shouldered lightly.

Theater Mitu’s production of August Strindberg’s A Dream Play was a reinterpretation of the text under Polendo’s direction. His adaptation of the script was reminiscent of Caryl Churchill’s own reworking of the script for London’s National Theatre a decade or so ago, in its simplification of some of the original’s obtuseness and obscurity. The rest of the staging was similarly beautiful in its simplicity: the set and costumes were almost wholly white, with symbolic video projections and atmospheric music that conjured up the dream-like world that these actors and their audience were entering.

The play’s underlying themes were undoubtedly universal. The audience witnessed an anxious love story set against a backdrop of human futility. Universality may be one requisite of how to perform the global university, as a way of offering the creation of community. The audience walked away from the auditorium that evening discussing, critiquing and – perhaps – dreaming. On a university level, the production gave students the chance to engage with a professional theater company. On a city level, A Dream Play gave Abu Dhabi the chance to engage with theater. These chances are coming more often, and the city proves more receptive to these provocations with each production. Conversations are starting, and communities are growing. New York University claims that it is “in and of the city”; in the same way, theater in Abu Dhabi must be “intensely collaborative and inherently local.” Only with such engagement can the city perform as a global city on a global stage.