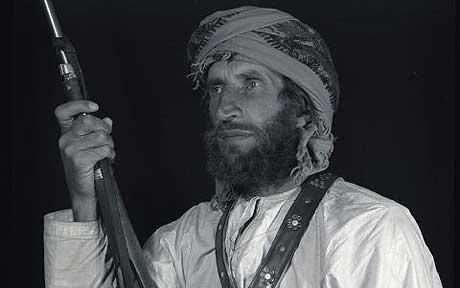 Electra Street is sponsoring a second “Abu Dhabi Reads” program in conjunction with the NYU Abu Dhabi Institute. We’ll be reading Across the Empty Quarter, an abridged version of Arabian Sands, Wilfred Thesiger’s classic account of his travels in the Empty Quarter in the middle of the twentieth century. Our discussion will take place in the Garden of NYUAD’s Downtown Campus starting at 6:30 p.m. on Thursday, April 11. The formal discussion will last just over an hour, with time for informal discussion over refreshments afterward.

Thesiger was born in Addis Ababa in 1910 and educated at Eton and Oxford. He joined the Sudan Political Service in 1935 and later served in Abyssinia, Syria and with the SAS in the Western Desert during the Second World War. In Arabian Sands, Thesiger describes his early experiences in the Sudan and Ethiopia, but the bulk of the book concerns his two crossings of the Arabian Peninsula’s “Empty Quarter” — the longest continuous sand desert in the world — between 1946 and 1948. The 250,000 square miles of desert that he traversed and re-traversed are now part of modern-day Oman, Saudi Arabia, the UAE, and Yemen. Along the way, he took the marvelous black-and-white photographs for which he is equally remembered. You can see them on the website of the Pitt Rivers Museum, which houses his archive.

I first realized the hold the desert had upon me when travelling in the Hajaz mountains in the summer of 1946. A few months earlier I had been down on the edge of the Empty Quarter. For a while I lived with the Bedu a hard and merciless life, during which I was always hungry and usually thirsty. My companions had been accustomed to this life since birth, but I had been racked by the weariness of long marches through wind-whipped dunes, or across plains where monotony was emphasized by the mirages shimmering through the heat. There was always the fear of raiding parties to keep us alert and tense, even when we were dazed by lack of sleep. Always our rifles were in our hands and our eyes searching the horizon.

Thesiger documents a way of life that existed in the desert for hundreds of years, coming to an end only recently with the discovery of oil in Arabia. Across the Empty Quarter presents the chapters devoted to the two crossings. Those who have the complete Penguin edition of Arabian Sands (available on Kindle) or the editions published in the UAE by Motivate Publishing — either Arabian Sands or the lavishly illustrated Crossing the Sands — and want to read more might take a look at the following chapters: “Secret Preparations at Salala” and “The Approach to the Empty Quarter,” which are rich with ethnographic detail, and “The Trucial Coast,” which describes the month that Thesiger spent in the in Abu Dhabi and then in Al Ain with Sheikh Zayed. (The Al Jahili Fort in Al Ain now houses a permanent exhibition devoted to Thesiger.) The two prefaces to the Penguin edition shed interesting light on what motivated Thesiger to live among the Bedu and record his disappointment at the almost complete disappearance of their traditional way of life.

It goes without saying that reading Arabian Sands in its entirety is highly recommended; Across the Empty Quarter contains Chapters 7, 8, and 11, as well as an excerpt from the preface of the longer volume.

Our discussion on April 11 will be accompanied by a slideshow featuring Thesiger’s photos. If you think you might attend, please RSVP at the NYUAD Institute’s website so that we know how many refreshments to order.

We look forward to seeing you at Abu Dhabi Reads for an evening of lively conversation.