Going Beyond the Superlative Mindset

“When built in 1890, the Palacio Barolo was the tallest building in South America,” says Diego, his upturned finger inviting my eyes skywards. As the tour continues its leisurely pace through the streets of Buenos Aires, I hang behind for a moment, sheltering my eyes from the sunlight that shines back from the windows. Now where have I seen this before?

Of course: only a few months had passed since I stood with my mouth gaping open at the base of the Burj Khalifa, craning my neck as far back as it could go to catch a full view of the tower. That time as well, gleaming surfaces had stunned me into silence. “The world’s tallest building, sure, but I hear they’re building a taller one in Saudi Arabia,” my friend had muttered. “The fountain show here is spectacular though; can you believe that we’re surrounded by sand-dunes?”

I had indeed forgotten about the desert; in a city like Dubai, it is all-too-easy to forget where you were. Our tour group (made up of Indian, Japanese and Chinese tourists among others) stands out like a sore thumb; in Dubai, on the other hand, where foreigners are the overwhelming majority, every local I saw wearing the traditional abaya or khandora stood flanked by three tourists with straw hats perched atop their heads. Buenos Aires, as Dubai, beats down a prickly heat that makes my shirt stick to my back, but the pronounced development of the desert landscape in Dubai relegates the summer to an expendable commodity; one can, in the same afternoon, venture on a desert safari in sweltering temperatures and then enjoy an indulgent shopping experience in the air-conditioned interiors of Dubai Mall.

In Dubai and Abu Dhabi, cities engrossed in the attempt to “rebrand” themselves as leading tourist destinations, these dueling images crop up everywhere you go: a shawarma stall huddled next to Starbucks, a tiny barbershop at the base of a towering skyscraper. These contrasts make me wonder: how does a newly developing city differentiate itself to carve a unique identity? What is a city’s identity? In Buenos Aires of 1890, a combination of freedom from colonial rule and a prime trading location put them in the same category where Abu Dhabi and Dubai now find themselves: governments with ambitious development plans and no dearth of resources to fulfill them. In these plans, however, why was possessing the superlative of the “tallest” building so important to Buenos Aires? Where would Dubai feature on the global map if a taller building really is built in Saudi Arabia? 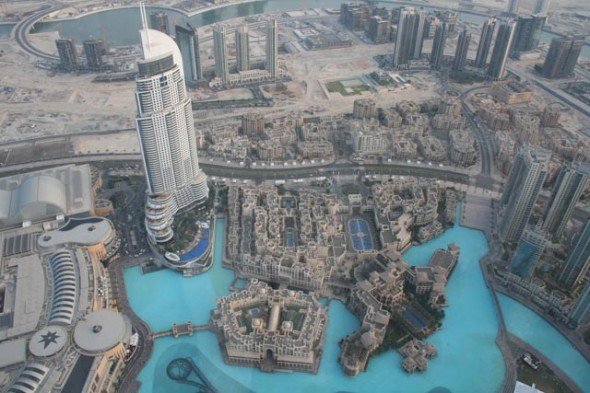 View from the observation deck of the Burj Khalifa in Dubai.

In sociological circles, the use of money in an overt manner is called “conspicuous consumption.” Thorstein Veblen developed this notion to explain the tendency of consumers, regardless of social class, to signal their consumption habits to their peers in a way that emphasizes their monetary strength.

While the Veblen model is essentially microcosmic and has become known, colloquially, as the “Keeping up with the Kardash…Joneses” mentality, I wonder if the same concept could apply to urban development; don’t governments, just like people, harbor dreams of upward mobility and increased prestige? In attempting to differentiate one city from another and create a unique identity, developers – quite understandably – focus on drawing tourism through the rare and the novel.

At the most basic level, the superlative mentality is showboating – there are no two ways about it. The motivations, however, may derive from nothing more than a quirk of economic practice and the exhibitionist impulse at the core of human nature. Conspicuous consumption cannot be singularly achieved: creating a unique identity compels at least a basic awareness of the achievements of one’s peers, or the limits of what has come before..

As Buenos Aires once prized the tallest building in South America and Dubai now proudly hosts the tallest building in the world, these buildings are important because, quite simply, they are (or were) taller than the rest – the identity of the city emerges through comparison. Some superlatives are more ludicrous than others: no record books are being rewritten to include the world’s first hydromagnetic-powered tornado in the world (in Yas Waterworld) or the most expensively ornamented Christmas tree (in Emirates Palace, the most expensive hotel in the world). 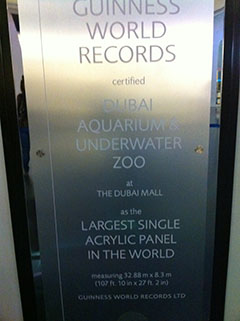 t, is the identity of a city so one-dimensional as to be reduced solely to her tourist attractions? In the framework of urban development where identity is conceived in relativistic and competitive terms, how does culture and tradition figure into the global perception – and identity – of a city or country? Going back to a household model: if I wanted to decorate my home over the holidays, I’d be lying (or overly competitive) if I said that I always acted with my peers in mind. The ornaments on the Christmas tree may create an identity for the household based on the superior allure – “have you seen the solid gold star on Martin’s tree?” – but then again, another family may place the same ornament atop the tree as it has for the past few decades purely out of reverence for the household tradition.

A government, perhaps, is no different: both Buenos Aires and Dubai attempted to position themselves on the global map through elaborate development strategies, and the identity of the city came to be associated with those attempts. Buenos Aires, as an example of a much older city, was once identified with the tallest building in South America but no longer holds that title, which suggests that urban identity is transient and, perhaps, even fragile. When the dust from a construction site settles and a taller building comes forth in another country, does the city lose its only identity?

If we look beyond the framework of the superlative mentality, then the answer is a reassuring no. Tourists continue to visit Buenos Aires, if not for the “tallest building” or a mélange of cultures then for the pulsating experience of tango lessons. The newer governments of Abu Dhabi and Dubai have, to their credit, recognized the importance of upholding cultural heritage: what results is a loving but sometimes fraught embrace between the superlative mentality and cultural tradition. No expense is spared, it seems, in creating large-scale theme parks or innumerable foreign chains but cultural norms remain paramount. Prada stores and prayer rooms stand shoulder-to-shoulder in the same stretch of mall space, and locals flit between the two. None of the burger chains in the city serve pork, but camel meat, the desperate (but life-saving) measure of Bedouins, “back in the day,” quite literally provides you a taste of local culture.

In many respects, cultural traditions are like the rolling sand dunes that surround these developing cities. In a country where foreign influences constantly vie for attention, where hotels jostle for space with labor camps, I have – like many new residents – struggled to reconcile myself to the opulent displays of wealth, and spent many an hour in the search for the identity of Dubai and Abu Dhabi. But sometimes, all it takes is to remember that, like the sand-dunes, the culture is living and breathing around us, coming alive in little but noticeable ways. That a shawarma stall and a skyscraper – or a foreign boutique and a mosque – can coexist in the same space certainly counts for more than the height of the skyscraper, or the expense of importing the marble of the mosque. And so, whether Saudi Arabia builds a taller building than the Burj Khalifa or not, life in Dubai and Abu Dhabi will continue. The superlative mentality is incidental, and not instrumental, to identity.