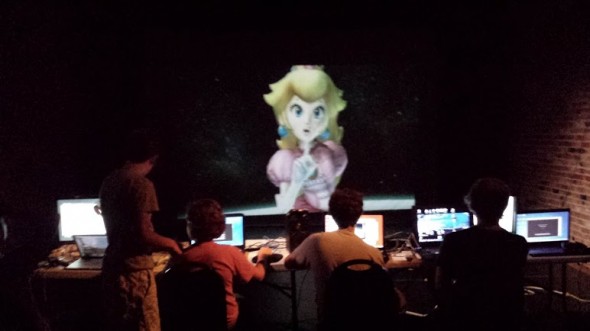 On the theater’s back wall a menu pops up, interrupting an animated scene from the Wild West.  In the action’s pause, the cursor drifts down a list of weapons before clicking “shotgun.”  The action resumes and—as the epic voiceover describes the Roman pillage—this cowboy opens fire on a donkey.  The scene then cuts to the medieval-fantasy world of Golden Axe II, but according to the narration it seems we remain on the destroyed outskirts of Rome.

For ten years, Eddie Kim has been producing machinima theater with his current and former students from the Pierrepont School in Connecticut.  With machinima, artists manipulate video-game worlds to produce more-or-less cinematic sequences, usually to be shared online.  Kim’s EK Theater is distinctive in that they produce live performances using video-game characters as puppets.  Adding to the significant technical challenges, EK Theater draws on classical literature for its inspiration, retelling episodes from Ovid for example or adapting the Japanese ghost stories of Kwaidan.  The company, which now includes middle schoolers as well as college students in its ranks, has drawn curiosity and acclaim while showing their work at venues such as the Brick in Brooklyn and the ART in Cambridge.

In their latest piece Legendary, Maybe, the six puppeteers—“gamers,” as they call themselves—sit at a long working table, their backs to the audience; in silhouette, they are effectively in the front row.  In front of them are six monitors as well as a dizzying web of wires that link mismatched laptops, X-Boxes, controllers, and keyboards; the room feels a bit like a TV control room.  The “finished” drama, edited live from the table’s monitors, is projected on a screen at the back the black box, with the theater’s conventional playing space between table and screen left empty.  The performance is in the relation of these separate worlds, the scrambling ensemble here and what is projected out there.

Legendary, Maybe is Kim’s adaptation of Livy’s Ab Urbe Condita, a two-thousand-year-old, fragmentary history of Rome.  Eddie’s version—based on his colleague Carrie Thomas’s new translation—stitches together a number of Livy’s episodes with particular attention to acts of heroism, a theme suited to both classical theater and video games.  His adaptation’s abrupt shifts in story, place, and character are made even more startling as the production cuts across gaming platforms.  As Rome is alternately protected and seized—the details of Livy’s plot were a bit of blur for me—the image vocabulary departs from the initial faux-mytho-classical World of Warcraft. On a Cold War base in Call of Duty: Black Ops there is an execution scene, and more lightheartedly, Mario’s full-screen mouth is pulled and stretched to ventrilloquize narration.