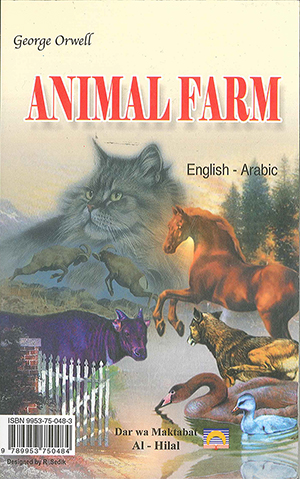 While I was growing up in New York, I was asked by my teachers to read George Orwell’s famous satiric novel Animal Farm three different times: once in sixth grade, once in tenth, and once in eleventh.The novel, we’d been told, was allegorical, and we read it each time as an allegory for something different.

Strictly speaking, the first time around we read it not as an allegory, but rather as a kind of fairy tale, a story about animals that could speak and the conflicts that arose among them. In fact, Orwell’s original title was Animal Farm: A Fairy Story. The subtitle was dropped when the novel was published in the US in 1946 and omitted from subsequent editions and translations.

In tenth grade, we read the book in conjunction with a course on modern European history, as an allegory of mid-twentieth-century fascism. Orwell had written the novel between November 1943 and February 1944, when Great Britain and the Soviet Union were World War II allies, a political situation that Orwell abhorred, given his active opposition to Stalinism. We also watched the 1954 film adaptation of the novel, a cartoon that takes some liberties with the plot to make it a little less downbeat.

The third time we read the novel to understand the principles of allegory — how it could work simultaneously on several levels — and we paid attention to the way in which the allegory worked not just as a view of twentieth-century European history, but also as an account of human nature.

More recently, I’ve been thinking about how the novel works as a piece of speculative fiction (a genre that might include science fiction, dystopian novels, and even thought experiments from political theory). Animal Farm enables us to think in a way that we normally wouldn’t and to contemplate a reality that is both like and unlike our own. Is it possible, I wonder, that speculative fiction, conceived in this way, might actually be the model for all literature? Doesn’t all “literature” — or, perhaps, all “great literature” — ask us to participate in what amounts to a thought experiment, entering into a reality that is simultaneously similar to and different from the one that we experience in our own heads?

Orwell’s novel has become a canonical text of twentieth-century Western literature. It was, for example, included in the final volume of the Great Books of the Western World series from Encyclopedia Britannica and the University of Chicago, and it ranks at #31 the Modern Library List of Best 20th-Century Novels.

Electra Street and the NYU Abu Dhabi Institute invite you to read and discuss the novel with us on Thursday, April 10 at 6:30 in the garden of NYUAD’s Downtown Campus. [Click here to RSVP] We have a few copies of a bilingual English-Arabic edition of the novel (pictured above), which we will be giving away to some lucky attendees. Copies of the novel are readily available at amazon.com (in both paper and Kindle editions), Magrudy’s in Abu Dhabi, and online at Project Gutenberg Australia.

Please join us for what promises to be a thought-provoking discussion of a classic of world literature.