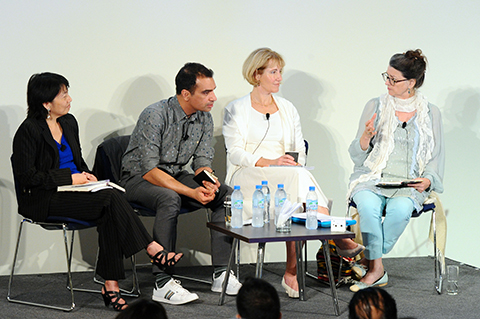 [Editor’s Note: The Man Booker International Prize is a literary award given every two years to a living author of any nationality for a body of work published in English or generally available in English translation. Electra Street caught up with the judges for the 2015 prize — Nadeem Aslam, Elleke Boehmer, Wen-chin Ouyang, and Marina Warner (chair) — during their recent visit to NYU Abu Dhabi for a program at the NYUAD Institute on the subject of world literature.]

Sutherland: What does the term “world literature” mean to you? Would you argue, like David Damrosch, that world literature is literature that has circulated and been translated around the world? Or does it refer to something inherent in the texts that we include under that label?

Boehmer: I take issue with Damrosch on that. It isn’t just what is circulated, what is translated. I do think it comes down to what we might refer to, perhaps uncomfortably, as universal stories. I think one of the reasons why Harry Potter appeals is because it’s the story of an orphan.

Warner: You’re right. There are structures that are universal. Harry Potter is also a quest story: it’s a story of combat between good and evil. But I think it’s also to do with this language that can be translated very easily. It’s the land of the supernatural. And in Harry Potter, J. K. Rowling has syncretized a million different mythological systems rather amazingly. She’s taken, you know, some bits of Indian, bits of everything, and mixed it all up together.

Ouyang: There’s a lot of the Arabian Nights in there as well.

Warner: Yes. She studied classics in university, so she’s got a lot of Greek mythology in there, too. You can say that that is a universal system of signs, rather than a linguistic language. It’s a semantic language, a symbol system that can be shifted from one culture to another without too much drag.

Boehmer: Which is why it circulates.

Warner: Tolkien is another. Universal.

Sutherland: In his article “Can Books Cross Borders?” Tim Parks argues that for a well-to-do young boy in Cheltenham, the aspect of Harry Potter that is alien is the magic, because the educational system in the novels is exactly what he’s used to. But to a child in Bangkok, perhaps the magic doesn’t feel as extraordinary, while it’s the fact that they go on a train to a far-away remote school with eccentric teachers that is alien in reading Harry Potter.

Warner: Have you been to King’s Cross lately? They’ve changed it! In the old station, they put up a little sign saying, “This is where the platform is.” So many people came and took photographs that they decided to make it a feature. They created the luggage trolley going through the wall. It used to be spontaneous, but the queue now has to be organized There’s a red cord and you have to wait for the photo opportunity.

Aslam: And they give you a star.

Warner: And they ask you which house you would like to belong to, Gryffindor or whichever, and they give you the house colors. And then you wear the scarf and –

Aslam: Someone flicks it.

Warner: And someone flicks it! So you look as if you’re going in! There’s always a queue of at least twenty people.

Aslam: Anytime someone comes into London, that’s where we meet. We say, “I’ll meet you at –”

Boehmer: At nine and three quarters.

Ouyang: That’s also world literature as global literature. Globalization is very much a part of it.

Ouyang: Yes, but if you think of the issues that Harry Potter is actually addressing, for one it’s really about growing up and relationships, and yet on the other it’s about this broad thing that everybody thinks about, the struggle between good and evil, that filters down into the day-to-day quotidian activities in a way that resonates with people and that people respond to.

Boehmer: I also think it’s a remarkable study in bereavement. And loss and putting your life back together. Across seven painful stages. I would wager the J.K. Rowling suffers from depression, because she’s very, very good on the dementors.

Sutherland: Do you think that the popularity of Harry Potter might have the effect of leading readers to begin a literary journey onwards, to more “difficult” or “classic” books? Or might it have the opposite effect? Rebecca Mead wrote an article recently in The New Yorker about how the publishing industry promotes books that don’t lead people onward but rather swallow up alternatives. She cites the volume of Greek myths that was written by Rick Riordan in the voice of Percy Jackson and wonders, “What if the strenuous accessibility of Percy Jackson’s Greek Gods proves so alluring to young readers that it seduces them … away from an engagement with more immediately difficult incarnations of the classics, Greek and otherwise?” We might say the same thing about the way Jane Austen is being rewritten these days.

Warner: Is this the zombie, vampire Jane Austen?

Sutherland: No, I was thinking of the contemporary novels by the likes of Joanna Trollope and Alexander McCall Smith. There is, of course, also Pride and Prejudice and Zombies and Sense and Sensibility and Sea Monsters.

Ouyang: The only one I know is P. D. James, Death Comes to Pemberley.

Boehmer: What’s interesting is that with all these rewritings we’re just doing Jean Rhys over and over again. But she did it first, didn’t she?

Sutherland: But we think of that as a postcolonial rewriting, or a writing back.

Warner: But the Greek myths themselves were written like that in the beginning. They were written and re-written in different collections in different versions. They were homogenized in the nineteenth century for dissemination and standardized. You were sometimes given a variant, but very, very few comparative variants exist. It’s hard to remember that in The Iliad there’s no mention of the cause of the Trojan War, and there’s no mention of the Trojan horse. We know the whole story because in the nineteenth century the people who retold them put them all together.

Click here to read part two of the interview.

Jamie Sutherland is a senior at NYU Abu Dhabi, majoring in Literature and Creative Writing.