Reflections on a Sri Lankan Adventure 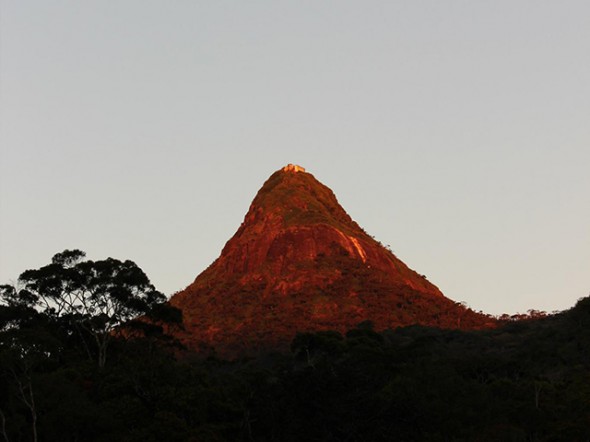 Finally! The torch works again. The others seem to gain confidence despite the rain beating down on their faces and keep climbing ahead. Me? I’m falling behind. Like always. This is what you get while trying to climb a mountain during a storm. Who thought this was a good idea again? Watch out! The steps are going down now. Good. This should not be too difficult, but careful there, you might slide …

… and I’ve twisted my ankle. Fantastic.

Now that I take the time to think about things more clearly as I sit here in agony … did I really want to climb? I want the pictures, sure, but I can do without the torture. Well, all the others will get there eventually and take pictures for me. At least now I won’t be the one keeping people back.

But why should that matter? You know what?! I can walk it off. Wipe off those tears! — I’m good, I’m good. Yes, I know it’s basically 6 hours up and down stairs. No, I am not going back to the hotel. I’m already 30 minutes away, soaking wet and wide awake at 2:30 in the morning. I might as well just keep going. It’s cold enough to keep my ankle cool. Yes, I know I will regret it in the morning. At this point, I don’t really care. Who knows? Maybe it will stop raining, and the climb to this temple will turn into something other than torture.

One of the most remarkable things I experienced in my short visit to Sri Lanka — well, at least remarkable for me, coming from the dominantly Catholic Peru, and having moved to the predominantly Muslim UAE — is the apparent harmony in which so many major religions coexist. Although 70% of the population is Buddhist, there are also visible Hindu, Muslim, and Christian presences in the region. While there are particular regions dominated by each religion, it is not atypical to see in a single block a Hindu temple, a Buddhist Temple, a Mosque, and a Church, which have sat beside each other for decades or even hundreds of years. Outside, you will find vendors catering to the devotees with offerings for diverse rituals, and pilgrims greeting each other as they exit and enter different temples. Of course, this has not always been the case, as the civil war that ended in 2003 demonstrates. Harmony is an ongoing commitment, and people need to work, revise and edit, like in any great work.

As an international NYUAD student, I am not really surprised by this harmony. We are after all one of the most diverse and functional petri-dishes in the world. However, as an agnostic-raised individual, trying to discover my own faith and spirituality, the small occurrences that other people may see as normal or even quaint fill me with wonder, and hope. Back home in Lima, I never met anyone who wasn’t either Christian or, like me, trying to find sense in between agnosticism and atheism. There are no other alternatives. Yet throughout our visit in the “Shining Island” we visited countless temples, met pilgrims from diverse faiths and got acquainted with their different philosophies, and how their different communities compromise in order to keep the harmony amongst them.

Not only do these various religions exist peacefully alongside one another in Sri Lanka, but, incredibly, many of them share sites of devotion and inspiration. Sri Pada (“sacred footprint”), also known as Adam’s Peak, is one such site. According to Buddhists, the footprint-shaped indentation found at the top of this mountain corresponds to Buddha’s foot, left after he visited Sri Lanka. For Hindus, the footprint is from Lord Shiva, and the mountain itself stands in representation of Ravana’s lair from the Ramayana stories. For Muslims and Christians, the footstep is of Adam, left behind when he was evicted from Eden. All of this spirituality is guarded inside a small Buddhist monastery, erected to protect this sacred footprint. Thousands of pilgrims climb to the top of the conical mountain every year, from where, supposedly, on a clear day you can see not only the most spectacular sunrise, but also cities hours away.

Sadly, I wouldn’t really know from experience. Because of the Eid holiday timing, our trip took place off-season. Specifically, during monsoon season. During regular pilgrimage months, December to May, the pathway up the mountain, with over 6000 stone steps, is supposedly lit with colorful lanterns to enable pilgrims to climb the mountain to admire dawn. There are also regular stops where climbers can rest and have refreshments. For us off-season tourists on the other hand, 2:30am had us out in our raincoats leaving the warmth of our hotel for the dark jungle, stepping into a storm that had lasted for hours, and would last for several more. In the light of the lanterns maybe I would not have minded the climb. I might have even grown to enjoy the burn in my legs as I climbed up those endless stairs that stretched into the heavens. It would have been quite a pleasant adventure. Instead, it was more of a terrifying blind scramble up and down a weathered staircase that seemed to resemble a potentially fatal waterfall more often than not. Which is not to say that I didn’t enjoy it. 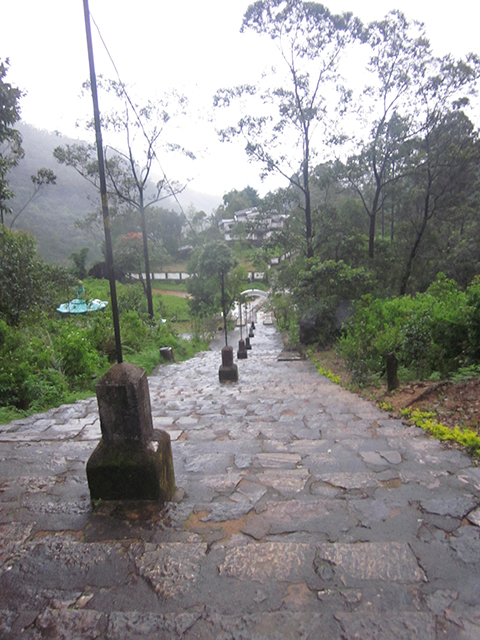 But an unforgettable experience? That it was. And, without meaning it to be, quite a spiritual one at that. Of course, on my way up, wet and heavy as a drenched alley cat and desperately holding an old torch possessed by dark sense of humor, my experience was far from spiritual. Well, in any aspect other than comparing myself to Dante coming up Purgatory Mountain that is. Throughout the climb my only positive thoughts were about the fact that I was not particularly thirsty in the rain.

Finally getting to the top and finding the temple closed for another hour until dawn was also not fun, particularly when we realized we were not going to have a very spectacular sunrise, since the storm was still raging on in all its glory. By that point in my journey the weather started to get less chilly, meaning my ankle was beginning to realize it had been tricked. Having lost the cover of the jungle, unprotected now from the storm and the winds (not exactly the deep connection with nature I was expecting) I might have looked up at the sky and thought, “Well that was almost worth it. Although I imagine this would be a really cool place in different weather. Pity I’m not staying to find out.” To my regret, the consensus of the group at the time was that the storm made everything not quite worth the wait. Breakfast, baths and beds just sounded so much more appealing. So no, I did not stay to see the gates open, and no, I did not get to see the sacred footprint. I guess I’ll have to go back (this time under better conditions and hopefully wearing appropriate hiking trousers), and say hi to Buddha, Shiva and Adam another time.

Surfing my way back down waterfall stairs while simultaneously cursing and praying to several deities probably did not get me many spiritual points or clean my karma account. However, once the rain stopped mid-way on my climb down, so did my curses.

It is amazing how being able to finally see your own tumbling feet and to know, rather than guess, where you need to put them can have a calming effect on one. My eternal gratitude to that ancient, faulty torch which waited until I could actually see the steps to give up. Once the fear and the adrenaline were gone, I could begin to think about the last five blurry hours. I, with the physical resistance of someone who doesn’t feel very guilty about not going to the gym had climbed that mountain. In the dark. During a storm. On a twisted ankle, which by now resembled a very nicely colored round plum. I had done it by myself, since I walked alone through most of it, but most importantly, I had done it for myself. Not to prove to my friends that I could do it, but to prove to myself that I could. I mean, what kind of excuses can I make now? If you could climb that, you have no excuses left for not doing anything else. When you are searching for spirituality, faith begins by believing in yourself.

As I admired the now visible valley, limping my way down the mountain through endless fields of tea leaves and mesmerizing waterfalls that had before been masked by the storm, I had a curious feeling that others might call “inner peace.” Yes, I was in acute pain, yes, I was soaked to the bone, and yes, I had entered into most inappropriate relationship with some leeches in my trousers (that is a story for next time). But I was at peace with myself and my efforts. Since I had the time and the freedom, I had a very nice chat with parts of me normally dormant, the kind that makes you question your entire existence and such. We agreed that I would talk to them more often and try to address their complaints, and in return they would stop keeping me awake at night, specifically before exams and important presentations. After months and months of struggle, I had won. And, it felt good.

Reaching the bottom of the mountain was not very difficult after that. I mean, I only got lost twice and had to ask 4 different people for directions trying to get to the hotel. All was good. What was stopping me from going back to Abu Dhabi and facing the mountain of pending work on my desk? Apart from the fact that I wouldn’t be able to walk properly for the next week … absolutely nothing.