The Lasting Appeal of Sholay

“Film is one way — perhaps the most important way — in which India makes sense of the teeming, heaving and chaotic multiplicity and the sprawling diversity of this tumultuous nation state.

Bollywood is ‘ordered chaos’ or pastiche, Bedlam at its chaotic best.”

The lights dim,
the music builds and
a train stops —
at the village where Gabbar Singh prowls.
Kitne aadmi the? 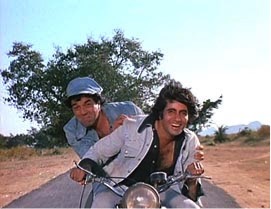 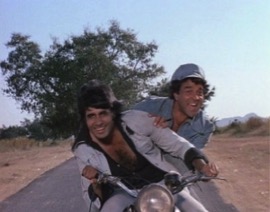 (they are the good guys)
out for revenge;
find romance instead. 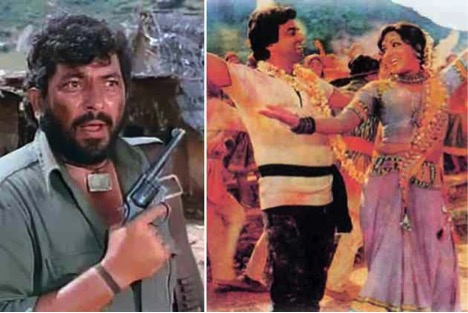 In the midst of chaos
harmony reveals its hand —
Jo darr gaya
Samjho marr gaya
says Gabbar Singh: “He is who afraid is dead.”
Gabbar loses and doesn’t die; Jai wins and…

When the train leaves
only two stay behind,
not Veeru and not Jai.

Thirty-nine years after the movie came out,
I finally see what the fuss was about.

Or at least I think I do — Sholay is a love-story; Sholay is a thriller; Sholay is a tragedy; Sholay is a comedy. Sholay occupies a unique place in the Bollywood imagination for spurring the whole genre of “masala” films and the reason it retains its appeal to this day is because it still strikes us as contemporary. The aesthetic that worked so successfully in Sholay continues to inspire modern-day films: these two movie posters are separated by 37 years. 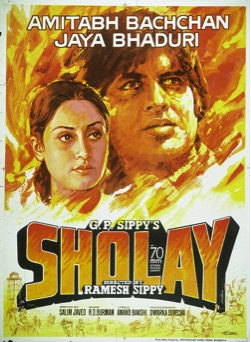 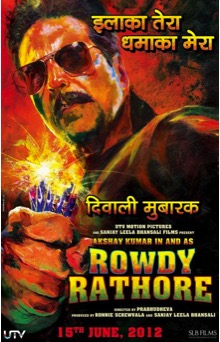 Above all, Sholay is a riddle. The plotline twists and turns; it delights one moment and frightens the next. Like much of Bollywood, the fun lies not in deciphering the riddle but in puzzling over it, in going along for the ride. The question is not whether the boy gets the girl — because of course he does — or whether or not the bad guy loses — because of course he does — but how does the boy get the girl? How does the bad guy lose?

It’s not everyone’s cup of tea, because it’s not an ordinary cup of tea. It’s masala tea.