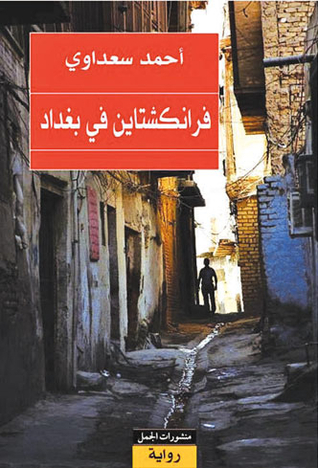 I’m speaking about Frankenstein in Baghdad, a novel by Ahmed Saadawi, an Iraqi novelist who was born in Baghdad in 1973. This novel won the International Prize for Arabic Fiction earlier this year.

As its title suggests, the novel was inspired by Frankenstein, although it has a very different storyline and, of course, a regional twist. The Frankenstein-character in the novel is, appropriately enough, an antiques dealer, named Hadi al-Attag. When his assistant dies in a car bombing in Baghdad, Hadi goes to retrieve the body from the morgue. But he can’t find the complete corpse; none of the corpses there are whole. A morgue employee tells him casually, “Just pick any body parts you want and make your own corpse.” So . . . that’s what he does.

He picks some body parts, goes back to his house, and assembles them. A nose is missing. He goes out and looks for another nose, from another car bombing site, and he sews it to the face. But he’s not sure what to do with the body he has reconstructed. He wants to give his friend a decent burial, so he waits for an opportunity to bury that body that he has just put together.

Meanwhile, he goes out to buy his lunch and is wounded in yet another car bombing. By the time he gets back to his house from the hospital, the corpse, which he refers to as Ashisma (the “What’s-its-name”), has disappeared. What has happened is that the corpse has become inhabited by the soul of the guard at the hotel where the most recent explosion took place, and it has gone off.

Where has it gone in this neighborhood of old decrepit houses? Next door, to another old, dilapidated house, in which an old Christian lady is living. She has failing eyesight, and her two daughters have emigrated from Iraq, one to the United States, the other to Australia. Her only son had died, a fact that she cannot bring herself to accept. So when Ashisma wanders into the house, she believes that that’s her son who has come back. She takes care of him. She feeds him. She puts him to sleep in her son’s old room.

And now Ashisma is on a mission. He wants to take revenge on everybody that killed a person whose body parts have now been incorporated into him. It starts out as a sort of mission to see that justice is done, but something strange begins to happen: every time Ashisma kills somebody who murdered a part of him, that part falls off and begins to rot. So for example, he after one revenge killing, his left hand falls off, and he needs to replace that left hand in order to be able to continue with his mission. He has to find a left hand from a guilty person, another terrorist or murderer. As he goes on killing, he loses other parts: a right eye or left eye or a leg.

You can see where this is going: eventually, he runs out of criminals to supply him with the fresh body parts that he needs in order to go on. So then he begins to target innocent people on the street.

Ashisma thus becomes a metaphor for a cycle of revenge that keeps perpetuating itself without any end in sight. What begins with a righteous desire to win justice for victims in the lawlessness of post-2003 Iraq soon degenerates into criminality as innocence and guilt become indistinguishable from one another, like patched and continuously repatched body of Ashisma, who goes on spreading terror in the city. In Saadawi’s novel, the Frankenstein myth is transformed into a powerful indictment of a cycle of violence that has taken a life of its own.

Click here to read a profile of Saadawi in The National.