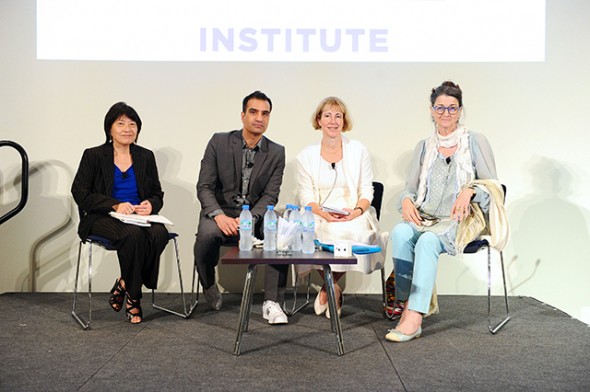 Where is world literature? It is quite a slippery fish, and it is not yet certain where we should look for it or where we might end up finding it.

I have become familiar with and interested in the academic discussion of the concept of world literature through my coursework in Foundations of Literature at NYU Abu Dhabi. On November 4, I attended a panel discussion with the Man Booker International Prize jury, entitled Where is “World Literature”? and sponsored by NYUAD Institute. The description of the event promised a conversation about the term which “suggests a territory without borders, where writers and their readers enjoy international mobility and intelligibility” and which was “coined to cover contemporary developments in fiction and the changing map of literature.” The quoted definition of world literature is only one of many that try to pin down this elusive category, but it seems to me catching the concept in some sort of a net is crucial for all further consideration. Since we are dealing with a still recent and unsettled issue, our first step should be to ground the term world literature for the purpose of unifying our efforts to understand and frame it. 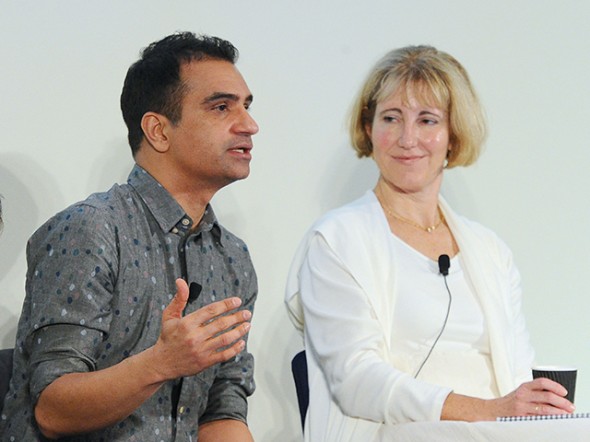 A member of the Man Booker International Prize jury, novelist and Professor of World Literature in English Elleke Boehmer considered the forces which propel books across borders and compounded the question of world literature with three interrogatives: where, when, and who.

Where is world literature? Boehmer suggested that what was once an opposition between the city and the village is increasingly shifting towards the loci of the city, with world novels defining city life in various parts of the world.

When is world literature? Boehmer emphasized that it is important to think carefully about how to undertake the project of periodization. I would add that it is equally important to think about what is to be done with the frameworks that the Western intellectual tradition bequeathed: an example of the disconnect between established scholarly frames and emergent literatures is the confusion that arises when Eurocentric terminology applies labels like “modern” to a historical classification of the Arabic or other non-Euro-American literary traditions, in which “modern” may refer to completely different time periods and have completely different connotations. When the scope of literary studies is expanded to the whole world, I think the academic language needs to be reevaluated as well.

Who is world literature? Prizes like the Man Booker International elevate certain works and authors above others and launch them into the critically acclaimed literary sphere. Marina Warner, Professor of English and Creative Writing and jury chair, said that international prizes create a communicable world of books for global consumer culture, but I think that international prizes are distinguished from national awards because they also create or at least participate in creating a system of world literature. The Man Booker International Prize differs from its sister Man Booker Prize in its discretion of selection. Because the jury does not accept any submissions from publishers, the jurors themselves become active agents responsible for shaping the landscape of world literature; more than global currents of economic or literary capital, their affirmative action plots the literary activity that is disseminated into the world. “Who” can thus become a double-edged sword: not only who produces texts and subsequently becomes part of world literature but also who collaborates to manufacture the system of world literature? When we think about the players in “world literature,” we need to keep in mind not only the roles of publishers and readers-consumers, but also those of prize-givers as well.

It seems to me that while we have established different characteristics of world literature, we still have not made any attempts to throw our net of definitions into the water. A final question is therefore missing: what. What is this body of literature whose places, times, and individuals we seek? What is world literature?

Since Johann Wolfgang von Goethe first coined the term “world literature,” the concept of reading beyond one’s culture and language has been constructed and deconstructed again and again. David Damrosch, founding director of the Institute for World Literature at Harvard University, has written widely in the fields of comparative and world literature and in What is World Literature? (2003) he asserts that world literature is “not an infinite, ungraspable canon of works but rather a mode of circulation and of reading” that “encompass[es] all literary works that circulate beyond their culture of origin, either in translation or in their original language.” Italian scholar Franco Moretti, trained as a Marxist critic, borrows from the world-system theory to model the network of world literature upon a system of social and economic organization: he defines world literature as one, though unequal, system of inter-related literatures, a comprehensive system of variations. 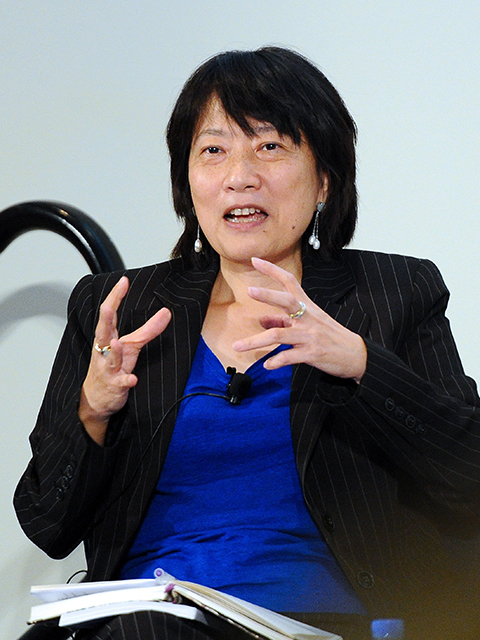 All of these attempts at containing world literature are useful for the future academic discussion they provoke; I would even go so far as to say that every conversation about world literature first needs to furnish the abstract concept with specific meaning. Another jury member, Professor of Arabic and Comparative Literature Wen-chin Ouyang pointed out that throughout the discussion three adjectives, “international,” “global,” and “world,” were being used interchangeably. I began noticing the same trend, but I believe that “world” in “world literature” is a modifier so essential to the concept that it cannot simply be replaced with a synonymous adjective. The shift from literature of the world to world literature requires contemplation of the differences between the two.

The jury shared a sentiment that certain universal themes and motifs work as a binding agent that maps onto the landscape of world literature. Jury member and novelist Nadeem Aslam said he feels kinship with other writers when contemplating the notions like mother or home, which are both ubiquitous and grounded in the cultural locality. The jurors seemed less concerned with the conceptual framework around “world literature,” but I insist that world literature—precisely because it is not just literature of the world — demands something more than eternal or ever-present elements and stories. Even though it is a good starting point, the criterion of universality is a too expansive conception of world literature.

But geographical dimension is not the only one we need to pay attention to. Warner highlighted that in world literature theories, the dissemination of literary works occurs in two directions: from the level of local to international and from one language to another. The language the jury is reading in is English — and it struck me as a silent condition that the destination language of all world literature must be English as well.

Warner expressed succinctly the jury’s target: “Anglophone in orientation, global in reach.” The project of “world history” inherent in the Man Booker International Prize selection is therefore very restricted: the website for this year’s prize states that “the prize is awarded every two years to a living author who has published fiction either originally in English or whose work is generally available in translation in the English language.” I think a more accurate articulation of the jury’s problem and the title of the NYUAD Institute discussion would therefore be: where is world literature in English? 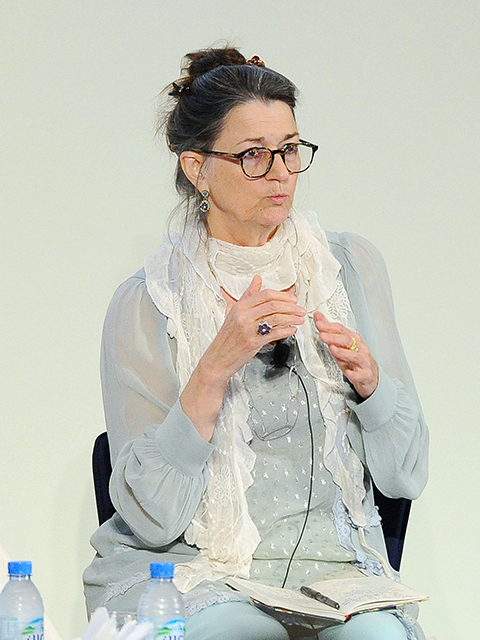 The choice of judges for the panel suggests what Warner confirmed in an informal conversation with students and faculty earlier that day: after the Man Booker International Prize went to authors from Canadian and U.S. traditions in the past three years, this year’s prize aims at a shift to so-called “peripheral” literatures. Boehmer pointed out that works of postcolonial literature today appeal across culture, not just through translation but also through experiences of transplantation that link us in the globalized world — another “universalizing” concept that can be challenged. She also emphasized a recent shift from postcolonial literature to world literature, and therefore from a conception of literature based on paradigms of center and margins to a seemingly democratic totality, as the event description indicated. More pressing questions appear: does the new literary system only omit the place and influence of the British Empire, as a member of the audience pointed out, and how egalitarian is world literature, really? Does increasing the body of literature to the global level and still containing it to English language mean a demise of Anglophone Eurocentric hegemony or simply its transformation?

Contemporary debate still rages about whether literary works can enter and exit world literature and whether all of Western canon has a secure place in it, but there seems to be less disagreement whether the language of our studies should be English. I think a critical question presents itself: is the project of world literature in English a logical expectation in an increasingly English-speaking world system or is it a new form of Anglophone linguistic and cultural imperialism?

In How to Read World Literature (2008), Damrosch views translation as the crucial tool that enables a text’s circulation and thrusts it into world literature, enriching the sets of meanings rather than curtailing them. What is lost in translation is lesser than what is gained, because in Damrosch’s view translation is “an expansive transformation of the original, a concrete manifestation of cultural exchange and a new stage in a work’s life as it moves from its first home out into the world.” It is therefore important to read in translation and be critically aware of the translators’ choices, both linguistic and social. Ouyang shared the experience of a confused reader who does not know which language system to tap into when reading in translation. “I speak all languages in Arabic,” she said playfully and described her reading experience of a novel as a multilingual artifact, nourished by her linguistic background. The others shared her observation: Aslam pointed out that he thinks in English but feels in Urdu, and Boehmer elaborated on a sense of double reading, a promise of the original underneath the translation. All of these experiences pose a fundamental question: are we reading and judging the translated text or its idea of the original? Or the original that we believe we can infer from it? How do we think about translated works? And are we not depriving ourselves of the complex linguistic interplay of multiplicity by reducing coexisting translations to one language?

I think at this point in the life of world literature it is more important to ask questions than answer them. But first we have to initiate a discussion about the problems arising from the conception of world literature in order to establish a common framework and terminology; or we have to learn from our inability to do so. The panel discussion was a step in the right direction insofar as it revealed a burning need to talk about world literature as a conceptual system: either as one big English-speaking fish we are hungry to catch, or perhaps more as a net we need to sew together to catch the flock of different fish swimming our way.

Grega Ulen is a second-year student at NYU Abu Dhabi, majoring in Literature and Creative Writing.