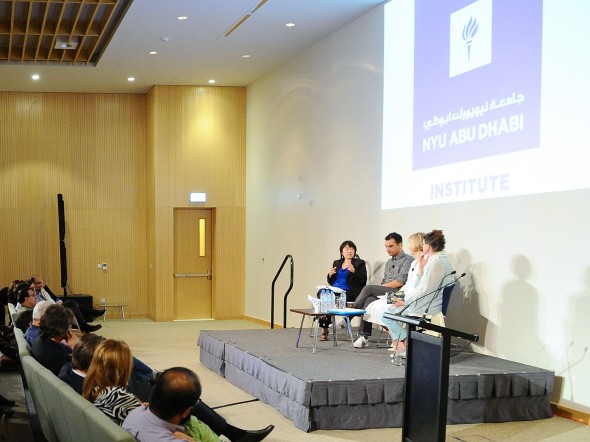 [Editor’s Note: The Man Booker International Prize is a literary award given every two years to a living author of any nationality for a body of work published in English or generally available in English translation. Electra Street caught up with the judges for the 2015 prize — Nadeem Aslam, Elleke Boehmer, Wen-chin Ouyang, and Marina Warner (chair) — during their recent visit to NYU Abu Dhabi for a program at the NYUAD Institute on the subject of world literature. Click here for the first part of the interview.]

Jamie Sutherland: At one point during your discussion at the NYU Abu Dhabi Institute, Nadeem Aslam said that the writing desk is the only nationality of the writer, even though this writer is nevertheless still trying to show the world’s injustices. Do you think that world literature has managed to transcend national identities and biases? Could we describe it as supranational?

Elleke Boehmer: I think that national identity is not as crucial as it once was. World literature’s concerns now may be the concerns of a region. Or the concerns of a certain minority. Or of a migrant community or a cross-border community. Or indeed of writers who simply feels that they’re representing themselves, their own particular situations. It doesn’t necessarily come down to national identity, which I think is how world literature was conceived in, say, 1895.

I think the Asian contingency, the Asian bloc, has responded very much to David Damrosch’s idea of modes of circulation. For him, circulation is linked to a national canon and an international canon. He emphasizes canonicity. The movement is always from east to west, from the current periphery to center, to primarily London or New York, thinking about English. The Chinese would say that that’s not world literature: what about the “Pan-Asian empire,” the Chinese classics that are at the heart of a body of work that is shared across nations – Korea, Vietnam, China, Japan.

Sutherland: You spoke briefly last night about the ways in which literary centers and all these nodes in the network of world literature are still determined by traditional postcolonial power and influence.

Warner: No, I don’t think it’s only the old trade networks, because the very fact that we’re we’re here in Abu Dhabi shows that it follows also where the new money is.

There’s also the E.U. effect. The E.U. keeps having to expand because it has to find new people to lend money to, because it can’t profit that much from itself. That’s my view on it. I’m quite keen on being in Europe. But I also think it’s about we basically have enfiefed more and more people on the borders in order to have more markets that we can dominate. So there’s that effect as well, that actually publishers are looking not on the old trade routes, but on the new ones for people they can sell to now.

Boehmer: The literary robes have been ripped off.

Warner: They don’t have Penguin Classics bulging in their tweed pockets anymore. They’re cool, sharp; they’re dressed in Armani; and they take their business class flights to the new markets.

Sutherland: Do you think that could be from a not as yet established literary nation? Could that be from central Asia?

Boehmer: Yes, but then there is a thing about language. So a writer from central Asia would need an extremely compelling translator. Or would probably need to write in one of the major world languages. One of the top ten in terms of number of speakers.

Warner: There’s a bit of a parallel with the visual arts. And it’s a tremendous problem for artists and writers, which is this co-opting by the market. You’re quite right about Central Asia. There’s a sufficient amount of possibility there in terms of the nations with oil and so forth. One can see that they might attract some sort of publishing magnate. They would find some extraordinary visionary, perhaps a poet of the steppes, who’s writing an extraordinary visionary poetic history of Uzbekistan, of Kyrgyzstan. And then somehow this is translated and starts traveling on. It happens to artists. They’re put up in front of audiences all the time to be –

Warner: To be the spokesperson. And that’s a problem. It’s been one ever since the world came to mass marketing. You devour your saints. You make saints because you need to have some guarantee of your freedom, identity, whatever. And then you eat your saint. Cannibalize your saint.

Nadeem Aslam: For me, the important stage is the one before this writer or this visionary is discovered. When he’s just doing his thing before he was discovered by us.

We talk about language and writers. The great Pakistani writer Intizar Hussain was shortlisted for the last Man Booker International Prize. Now, I grew up in Pakistan reading Intizar Hussain. I left Pakistan at the age of 14, and for me he was just brilliant.

When we came to England, we had to leave in a hurry. My mother brought her Koran. She said, “I’m not leaving it. For all we know, they don’t have Korans in England.” But, of course, they did, though she — we — didn’t know that. So the only thing we brought was my mother’s Koran. Which she still, reads 35 years later. Eventually we had books sent to us. And I was reading Intizar Hussain.

So in a sense, for me the important thing is that stage when you’re on your own and you are trying to do your work. I feel like I’m incapable of understanding what we are talking about. I’m not a publisher. I’m not an academic. I can’t understand how my work is slotted into whatever is going on out there. I don’t even know what those currents are. Is my work global literature? I have no idea. If someone tells me it is, I would say, “Okay.”

In you campus bookshop, there are these little figurines of camels. And I was telling them that that the English word for that animal is camel, C-A-M-E-L. In Urdu, it’s “oont.” When I write “camel,” for me that is exotic. When I write “oont,” it is not exotic: it’s ordinary. And it is the same animal. When I write the word “monsoon,” that becomes very exotic. But the word for the rainy season is “barsaat.”

My being born in one place and having been brought to another one. And having to learn a new language because we couldn’t go back. The dictator who had sent us here was still there. And I was at an age where I had to go to school and had to get an education, so I learned a new language. Now when I’m becoming aware of these things, I do think I want to talk about the rainy season, but there is no other word for it except monsoon. And “monsoon” is exotic. While “barsaat” isn’t.

Boehmer: It depends on position. The world is not homogenized, the same everywhere. There are areas of greater and lesser concentration. And much depends on where you are located on the map.

Ouyang: But it’s also a language world, right? The world that you inhabit. So that if you live in Urdu, the world for you is different from if your language was English, and so when you then read or write English, your response is different.

Aslam: As I mentioned last night, I’ve read Anna Karenina four times, three times in English. And then I picked up the Urdu translation. And it’s a different book. Reading it in Urdu, I imagine that it takes place in Pakistan. Michael Ondaatje said that because he grew up in Sri Lanka, where the houses are bungalows, he had only seen one staircase ever in his life, when he went into town and there was a big shop. So that whenever there was a staircase in a book that he picked up, that was the staircase he imagined. Because he had no other reference point of what a staircase was.

Jamie Sutherland is a senior at NYU Abu Dhabi, majoring in Literature and Creative Writing.