The Dust Behind the Magic: Volunteering at ADFF 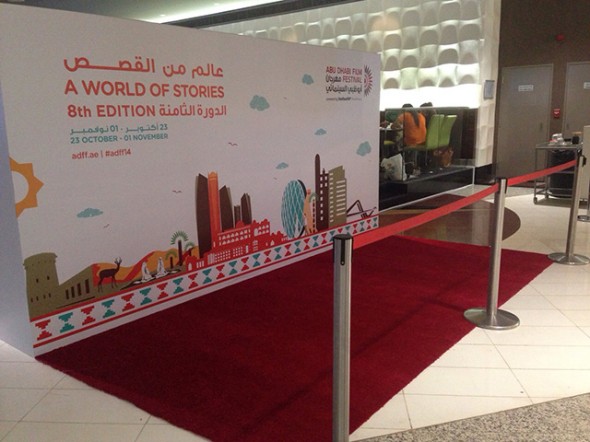 Red carpets … movie stars … and glamour! Aren’t these the words we often think of when we hear about the Abu Dhabi Film Festival, or any film festival for that matter? We see movie posters on the walls and blinding lights that are trying to capture that beautiful smile an actress gave when she walked in. The smell of buttered popcorn surrounds us as we enter the movie theaters, excited to watch and evaluate new movies. We hear the soft chatter of people waiting in lines to buy tickets for films featuring their favorite actors and actresses, the joyful laughs of eager children, and the energetic interviews conducted at the festival. In short, we get a taste of a really wonderful cultural and intellectual experience.

But rarely do we glimpse culture behind the curtain to see the hard work of all those passionate people who help this event come to life every year. Luckily, through a volunteering position, I got the chance to see a glimpse of what it’s like to be on the “inside” of such a huge event, and for a few hours, I got to see the dust behind the magic.

As a volunteer for the 2014 Abu Dhabi Film Festival, I attended a short orientation session where the woman n charge of the volunteers briefly explained the job of a volunteer. This session took place a few days before the festival, and we could see how the ADFF staff were rushing around with papers and small headphones trying to sort out all the logistics before the countdown to the opening night. The woman in charge of the volunteers was very appreciative of our attendance and explained that they worked hard to get people to participate in this festival, and that volunteers are essential to the festival’s success. She proceeded to give us information about the various tasks we would take on, how shifts work, and who to refer to for help. She assured us that the volunteering captains, who are enthusiastic individuals who devote their time to lead volunteers and provide help when needed, will surround us the entire time. She emphasized on the fact that volunteers shouldn’t tolerate any rude behavior and anything of that sort should be reported to the volunteer captain, which made me feel very comfortable and appreciated. While she was talking, her colleagues were in a constant state of mobility, setting the scene for the “magic” to begin.

As ADFF volunteers, we get the chance to be a part of something that’s opening intellectual and cultural doors for the entire country, and creating the opportunity for cultural exchange. The ADFF gives the community an opportunity to engage in film culture, giving those talented directors, screenwriters, actors, and other film professionals the chance to enter the film industry and get what they need. These sorts of projects have one main component to their success, which is the enthusiasm of the youth in the society.

When I arrived for my shift at VOX Cinema in Marina Mall, I was told to check in with my volunteer captain: a calm young man who looked quite exhausted. I found this man’s capacity to handle everything at once and keep a smile on his face very admirable. The ease with which he performed his job, maintaining a schedule even more hectic than us volunteers, made our jobs seem easy in comparison. When we entered the volunteers’ office, I saw how cluttered it was with notes, schedules, and lists. Volunteer captains and other ADFF staff were always running around ensuring that each movie theater had enough volunteers. At certain times, they had to take on certain tasks themselves because volunteers were free to end their shifts when they please, thus resulting in times where the staff had to cover for lack of volunteers.

I learned from one of the student volunteers I met there that the film festival administration needed volunteers, and they got a lot of applications, but when people learned that the position was unpaid, they cancelled their shifts. It was sad to hear that these volunteers, who were mostly students, reneged on their commitments, knowing how much effort the people organizing this event spend to execute the festival. Maybe if they saw how much effort was put into organizing it, they would’ve considered sacrificing a few hours of their time to lend a hand in a project like this. What I found impressive was how the staff and remaining volunteers managed to make everything work despite that obstacle, allowing the festival to proceed smoothly.

At first, there was nothing for me to do as all the work spots were filled with volunteers, so all I could do was ask people to fill out a survey regarding their experience at the film festival. I know my next statement is going to be a shocker but brace yourselves: with the exception of some people who gladly gave me a few minutes of their time, people weren’t that enthusiastic about filling out a survey! Standing there, and waiting awkwardly for someone to show some interest in giving feedback about the festival, I remembered how many times I turned my head away and avoided such surveys. Doing this job got me thinking that maybe, just maybe, this feedback is actually needed; otherwise, the film festival administration would not make the effort to design it and have volunteers carry out this task during the festival days. The people who worked so hard to provide us with such a fun and educational experience need our feedback to improve things in the coming years. Even though ADFF employees/film professionals go through a year’s worth of work to provide an enjoyable, comprehensive film experience for the audience, movie-goers find three minutes for feedback too demanding. This doesn’t make much sense, now does it?

The volunteers whose shifts ended started leaving, taking away their complimentary movie ticket and food voucher as a thank you for their time. I was placed at the door of one of the movie theaters as a ticket-taker. While my job wasn’t the most fun in the world, I thought about how lucky I was to have the luxury of volunteering to gain insight about the film industry with the relatively short commitment of three days. The task may have been dull, but it allowed me to see what audience the ADFF attracted. On the door of that movie theater, I saw diversity; I saw families going in for a night of entertainment, mothers spending their ladies night at the screening of one of the movies, students coming for a night off from course work, and many film professionals who come to enhance their experience. All these people were gathered in one place, and they all had the chance to express their opinions about the movies by placing their vote in a box at the end of each screening. This box had a collection of votes that came from various types of people, achieving the goal of the festival and engaging every single person of the community in film culture.

My experience at the film festival was short, but it opened my eyes to several issues of which the most important one was how such events enrich our culture. Frankly, I was disappointed that I didn’t get to see any movie stars up close because my shifts were always at Vox Cinema, and movie stars are usually at the Emirates Palace. Nonetheless, I’m still happy that I got the chance to see the hustle and bustle behind the curtains, and see how this initiative is attracting and engaging everyone who’s part of the community. These initiatives won’t succeed without the contribution of the people they’re aiming to benefit: us.