These interviews developed into a documentary theater piece called Headspace, which invited the NYUAD community to think about what it means to be a student — particularly a female student — in Abu Dhabi. Headspace was performed for two nights, to a packed audience of staff, students, faculty, and administrators; the show sparked tears of laughter and recognition among everyone in the audience.

After the show, the four creators, Valentina Vela, Sachi Leith, Laura Evans, and Veronica Houk, talked with Cyrus Patell and Deborah Williams about the project’s origins and their creative methodology. We are presenting excerpts from that interview to commemorate that first Headspace and to set the stage for the second Headspace, which will be performed on Saturday, December 13 at 2 p.m. in the Amphitheater. 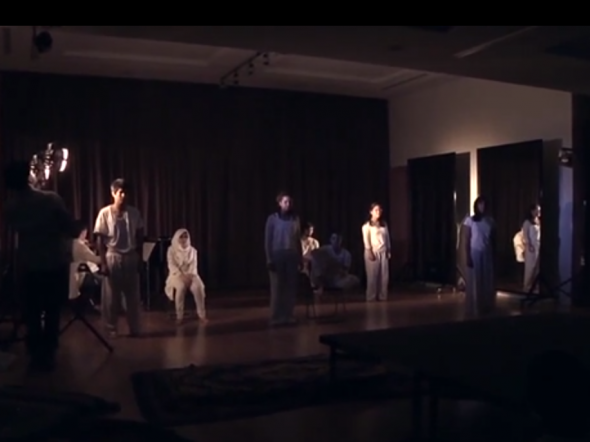 So I took a little bit of the model of “Occupy Wall Street”: as soon as it started, people began saying that they should document it. So they started interviewing people and performing it to the same people who were occupying Wall Street. People were performing their own realities, and you could take a break from occupying Wall Street to come and see somebody talk about occupying Wall Street, and then come back. A community steps out, thinks about what it’s doing, and then regenerates and continues growing — that, I think, is what we wanted to do.

Sachi Leith: I was excited about writing it, more from the standpoint of writing about “the university” than writing about women. And then over the course of the project I think it was the gender piece that became more important for me.

Laura Evans: One of the things that was difficult was that you do the interview, and in the moment, you’re like, “Yeah, I totally get what you’re saying.” And then three weeks later you’re looking at a transcript, and when you look at it, you think, “What?” I mean, people don’t speak in coherent or well-formed sentences at all!

Vela: And they contradict themselves.

Evans: And then when you show the material to the actors, they go through the lines and say things like “This makes no sense: my character is not being coherent, has no intention.” But all I am thinking is, “Man, this is just somebody sitting on my couch, like, crying about their lives.”

Vela: It would happen that we’d write a part that looks like a story, and it makes complete sense. And then one of us would say, “But you’re not voicing all the contradictions.” And then someone else would say, “Look at this interview,” which would just mess up everything. We had to accept those changes and stop the piece from being this perfect sphere and make it more into this weird rock with so many angles.

Veronica Houk: The question of authorship got really complicated. Because the four of us were working together. One of us would sort of put the wheels in motion, or maybe two of us, and then all of us had our fingers in everyone’s work. So all of our work is essentially everyone’s. Plus, when we wrote it, we sometimes combined lots of different interviews. And then it was performed, and someone else helped design interactive media and mise en scene. So, this represents creative collaboration between the four of us — and the community too. It felt complicated.

Cyrus Patell: Was the work of Anna Deveare Smith important to you? Her work is similar, although she tends to start with a trauma of some kind. There’s a riot. People are killed. She goes and interviews participants or she gets a transcript and then she crafts a monologue out of it. But it is always a monologue when she does it. … And then she tries to get across the specificity of all of these people: for example, she plays a Korean shop owner in the L.A. riots after Rodney King. And she’ll make you want to believe that she’s inhabiting that persona. There’s a kind of very local specificity that she’s getting at. But you tried to work more with composite characters. What difference does that make?

Leith: We live in such a small community. And, unlike Anna Deavere Smith, we’re presenting this directly to the people that we interviewed and directly to people who know the people that we interviewed. So we didn’t wanna say, “Oh, like, I am half Taiwanese and from Vermont,” because– you know, everyone will know who the  “I”  is. Or, “Oh, I’m Colombian but I live in Peru.” Here, where everybody knows everybody’s business, we didn’t want people to be sitting in the audience wondering, “Do you think that’s…so and so?”

Vela: On the day before opening night, we realized that we might be exposing somebody, and so we had to change words. The four of us had a horrible fight [laughs] at the end about that, but we had to change it.

Leith: But that was part of my dark time, I guess [laughs], because everything started to sound the same and started to sound like really, like, nicely put together and over-edited — we had taken away some of those distinctive qualities of people’s lives or people’s speeches. Like the ironing the grilled cheese scene. The first time we wrote that, it was really strong. And very opinionated. The first time we wrote it, there was a lot of, I guess, my anger in it. And then we edited that out, but we fought about that a lot. It ended up being funny, the way the actors did it, but I will never be satisfied just because it — it always feels like we’re going too easy on them. 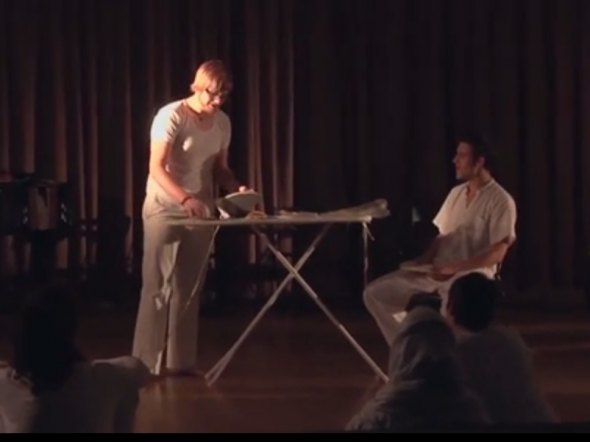 Patell: So, if Headspace were going to become a tradition at NYUAD, what aspects of it would you propose should become the tradition?

Evans: Yes, exactly. When the community talking to itself about itself, it’s so powerful. 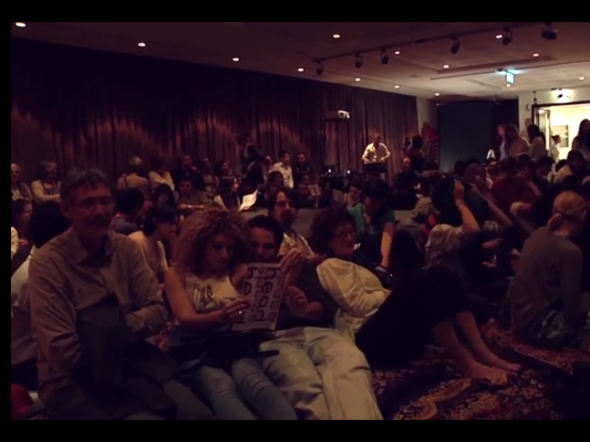 Patell: Can you imagine performing this particular piece in four years when everyone who’s here now has graduated and it’s another community?

Houk: I think it could be performed in another space. But the feeling would be completely different. At this show, it was fantastic seeing professors curled up in front, even professors I had in particular thought were very intimidating. But then they were curled up on a beanbag, like, next to, like—

Houk: And they were laughing at all of our kind of crude jokes. And I thought, “Oh, hey. I could maybe talk to you at some point in my life.”

Evans: I think that it’s representative of now. But I think that maybe in six years there might be the need for another Headspace.

Vela: When you think of pieces like Laramie Project, it’s so grounded in its political and social context. But then when you see Laramie Project Ten Years Later, it’s revisiting the same project with a different perspective. And I think that’s more along the lines of what it would be to revisit Headspace in a few years.

Leith: This project, all the interviews and all of our processes are more of like—some weird form of history. 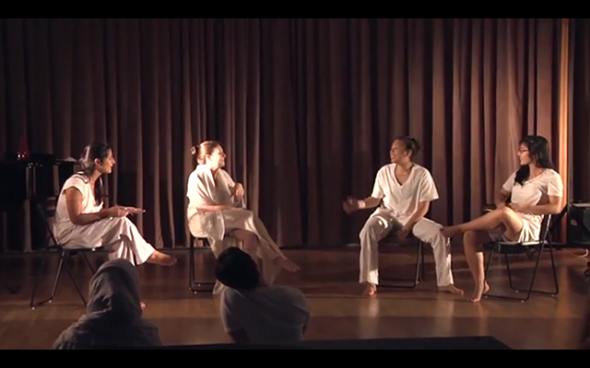 Members of the NYUAD community are invited to come see the next version of “weird history” created by the Headspace team: hear your voices and the voices of your community, and think about what the Headspace project should be for next year.

[Please note that this interview has been condensed and edited. All photos are courtesy of Nikolai Kozak.]