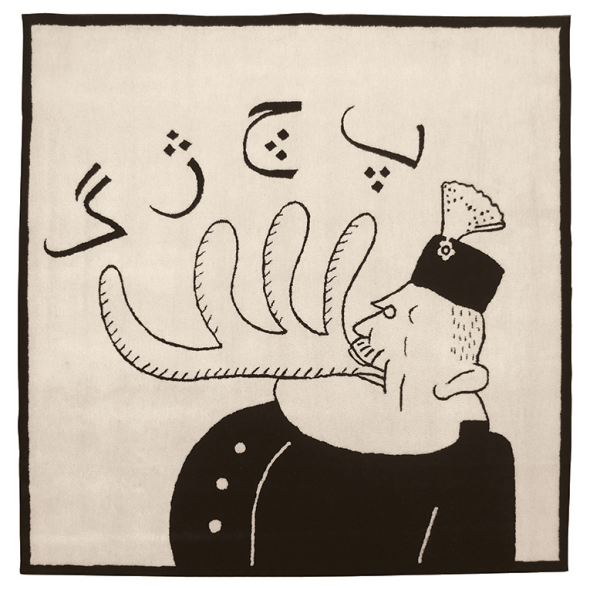 AN INTERVIEW WITH SLAVS AND TATARS, PART I

Diana Gluck: I read that you started out as a book club, could you tell me more about that?

Slavs and Tatars: Yes, we basically just started by translating small pamphlets, 10, 20 page things, into English that had not been translated before, or republishing things that had been out of print. We’d do editions of 10, of 50, 100, and we’d pass them around to our friends and charge nothing — perhaps ten bucks for an edition, most often gratis. We never expected to be artists. We thought — we’re going to continue to publish, maybe 1-2 books a year.

It’s a testament to the elasticity of art as a discipline. It’s really the only discipline we know of that is questioning its own boundaries all the time. It took a risk. They [the art world] basically said, “Okay, these guys can do interesting printed matter, let’s see if they can do an exhibition in three dimensions in space.”

Publishing remains so central to the practice, because it’s a reversal of normal hierarchy. Often the book in art is a type of documentation. A catalog. After the fact. You ask somebody to take pictures; you ask somebody to write about you. For us, the book must always be a beginning, never an end. 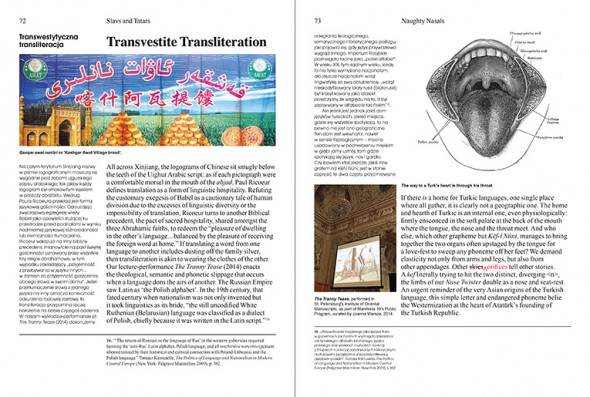 DG: Right, the book itself is not the artwork.

ST: Exactly. The other extreme is that it becomes an art book, where it costs a lot of money [and you have to] wear gloves. It’s a book as a piece. And for us, it’s actually, all the kind of sculptures in these installations that you see, they’re ways to bring people back to the book. For us, the book is the work.

And that kind of goes to our questions on knowledge production, which is why we got involved in this. We’re ultimately interested not in art as an end in itself, but how art can be a platform for asking certain types of questions, certain kinds of behaviors, certain kinds of affectivities or affinities.

DG: So you didn’t foresee a career in the art world at the beginning. You mentioned in a previous interview that you worked in different mediums because doing so allows the work to maintain a notion of indistinguishability and perhaps be present in places where it is not expected. Even though you work in a lot of mediums, they are all still presented in a gallery or art space context. Have you ever thought of placing work outside of this context to reach a different audience?

ST: There’s a great quote about art from an interview in The New Yorker — a profile of the Iranian artist Siah Armajani by Calvin Tomkins. He says that it’s very important to rescue the term populism, as populism for many people means the lowest common denominator, but actually, he says, populism can mean making the highest achievements possible for the largest amount of people. And he distinguishes, interestingly enough, between two terms. He says it’s important to distinguish between availability and accessibility. Making your work available for everybody is important — accessible depends on the person’s investment into the work. It’s available for everybody — it’s accessible if the person puts an effort into it — like anything in life, the more you put into it the more you take out. I think we ascribe to that.

The most rewarding lectures that we do are actually not in art departments at Yale or NYU or University of Texas, but actually the Middle Eastern Studies Department, or the Eastern European Studies Department, first of all because there’s more of a sense of dialogue. There’s too often this assumption that because we’re talking about a region that very few people know about that we’re somehow experts on the region. And we’re really not. You can’t be an expert on a region that big, as you know. It’s ridiculous, right? 340 ethnicities and I don’t know how many languages. So when it’s an art audience it [our work] often just sort of flies over everybody’s head. So there’s less of an understanding about maybe the performativity – not how we’re performing when we’re giving a lecture — but the research performativity; how we perform across the material. How we can play with the material.

DG: You don’t know when the performativity starts and when what you started with, the raw material, ends.

ST: Yes. And to be honest we’re very proud of the feedback from the Dallas show [more press here]. It was overwhelming, especially from the “layperson” – the non-art professional.  They just gave incredible feedback to the guards, the invigilators, the curators, and online. This is important for us because there’s a risk we run … when art … when any kind of medium … attains a critical mass, enough so that it can delude itself into believing that it’s big enough to speak to itself. Then you can think that “Okay, it’s big enough to be self-sufficient” and that you don’t need to speak to outside your own discipline because it’s so big now. What was maybe 5,000 people ten years ago is now 50,000 people. But that’s still not enough.

It was either Nick Serota or Chris Dercon (from the Tate) who said that museums today occupy the role that libraries did in the nineteenth century. They are places where people go for education and entertainment. That’s super important, but the third element that is perhaps the elusive one for all of us is the question of transcendence. How does it affect or spark a questioning that can lead to a different way of being as opposed to just thinking about something [the viewer] didn’t think about before. That’s why for us the most rewarding venues are places where there isn’t a critical mass of art, actually. It’s not necessarily New York or London but it’s Abu Dhabi, Istanbul, Bialystok in eastern Poland. You know, those are the places that for us give the most rewarding feedback. 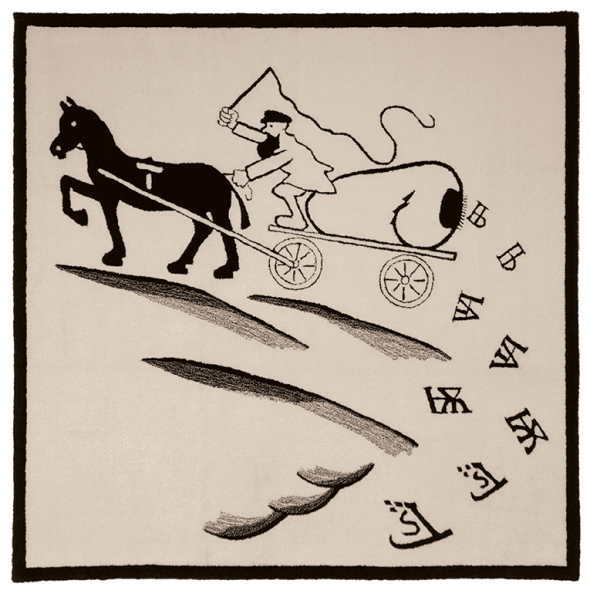 DG: Places where you are creating these dialogues where they might not otherwise be happening. How might your practice relate to that of a scholarly institution?

ST: There is that kind of transversal, cross-disciplinary investigation. It’s something that is obviously central to our practice. Our books — you can see it’s not journalism. There are journalistic elements, but it’s not journalism. There are scholarly elements but it’s not academic, it’s not purely analytical and objective and as rigorous of research as let’s say an academic publication would be. It’s intimate but it’s not a memoir, because it’s not about our lives. So there’s this kind of in-betweenness. Much as our region. Our region is in between. It’s not the Middle East, it’s not China, it’s not Russia, it’s in between these regions. And this sort of in-betweenness is an interesting, if difficult, space to straddle and I think that in parallel institutions of higher education, all kind of lay claim to that holy grail of interdisciplinarity. They all say that they’re interdisciplinary, but the ones who are able to implement it are … I haven’t seen many, if any. Because there are so many entrenched interests. It boggles the mind. There should be almost like a Hippocratic oath of scholars. How could you be a linguist if you don’t study religion, psychology, and history? The history department won’t give you tenure if you want to spend three years studying faith in language politics, because they’ll say go do that in the religion department or literature department. It’s the collateral damage of specialization in some sense, which is fine — which is important, but there’s obviously negatives to the positives as well.

DG: You’ve mentioned the interdisciplinary nature of your practice. In one article on the recent Lichtgrenze installation commemorating 25 years after the fall of the Berlin wall, I found the following quote: “Unlike a history textbook or an article on Wikipedia, art has the inherent benefit of showing, not telling.” I thought this was an interesting statement in dialogue with your work because your pieces often involve text alongside visuals. So in a way your work is another grey zone in that it’s showing and it’s telling. Or, it’s manipulating the showing of that telling.

ST: That’s a good point. It’s something that we ourselves sort of struggle with. We do show and tell, but you’re right, we don’t tell what we’re showing. A lot of times there are reading spaces with our shows and as you’ll see, our books don’t actually explain the work at all. We never talk about our work in the lectures. They’re investigations of our research. So [our work] disrupts this question of what it means to have text near a work, what it means to read near a work. We use the example of a bazaar in the sense that in a bazaar there’s something for everybody. Some people want to read, some people want more formal elements, some people want the performative elements, some people want some kind of text. This runs counter to this very precious, solemn, self-important tradition we have in art. A sort of notion that fine-art is, “I put one thing here [motions with cup on table] and then it’s up to you to kind of understand or … or not.” We try to create many levels of entry to the pieces. There’s not one. If somebody comes into one of our installations and just takes a nap, it’s just as valid and legitimate as someone who has read everything and knows the entire discourse around it. There’s no hierarchy of access to the work.

Go to Part II of the interview.

[Images courtesy of Slavs and Tartars]