A while ago, I wrote an article on Art and Home. Consider this piece a follow-up.

Few cities I have visited can pride themselves in having as cosmopolitan a cuisine as Abu Dhabi does. The city’s 1500+ cafés, restaurants, bars, and canteens serve a greater variety of food than I could ever hope to sample. But for all its sumptuous food outlets, Abu Dhabi can feel like a food desert for Scandinavians who yearn for a taste of home. That said, one oasis on Yas Island cooks up the food we so crave: more or less authentic Swedish meatballs. 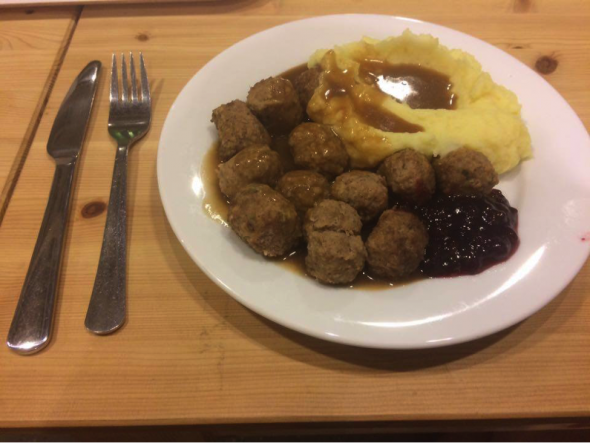 Swedish meatballs may not look appetizing, but I cherished every bite, including the thirteenth ball the server gave me by mistake. (Photo: Nikolaj Ramsdal Nielsen)

Save for McDonald’s perfectly geometric hamburger patties, no meat comes in as uniform a serving as IKEA’s 100% horse-meat-free balls doused in a supposedly Scandinavian gravy and served with a generous ladle of mashed potatoes and lingonberry jam. It should scare me that the meatballs I ate in Abu Dhabi this Wednesday tasted and looked exactly like the ones I would buy whenever my family made our biannual pilgrimage to the IKEA outlet near Odense, Denmark. Assuming a truck driver drove directly from the factory in Källby which produces every meatball IKEA sells and took no detours, he would have to drive over 7,000 kilometers to reach the canteen on Yas Island. One would think the time it takes for the meatballs to arrive in Abu Dhabi would make them unpalatable and stale. With that fear in mind, I suppressed my cravings for Scandinavian food for four protracted months. When I caved last December, I realized that far from rendering the meat inedible, the voyage from Sweden to the U.A.E. does the balls well, tenderizing them like a steak under a cowboy’s saddle. Of course, four months of deprivation may have lowered my standards for what I accept as authentic Scandinavian food, or perhaps the Indian server gave me a particularly good dozen on that first visit. Whatever the reason I fell enamored with the canteen on Yas Island; I have made monthly trips to the blue and yellow colossus next to Yas Mall since December. 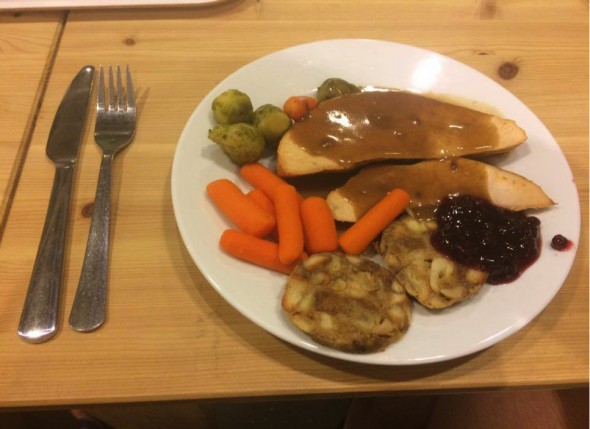 I cannot review the meatballs in a way that does justice to readers who do not know what it feels like to crave food not for the taste of it, but for the memories it contains. I can only say that if IKEA stopped serving heaven by the dozen, I would have no qualms turning vegetarian overnight. Though the taste always struck me as somewhere in the uncomfortable realm between mealy and meaty, I cling to IKEA’s meatballs, because Danes in Abu Dhabi do not have any other food to hang on to. (No, Danish pastries are not Danish; the French call them Viennoiserie (literally “things from Vienna”) for a reason.) For want of something better to cherish, or something actually from Denmark, I cling to the Swedish meatballs whenever I want to reconnect with the country I left behind. Although Danes mostly eat their meatballs in a clear soup dish that most people despise, IKEA meatballs come closer to an accurate representation of Danish cuisine, whether we like it or not.

If some medium told me four years ago that I would revere Swedish meatballs the way I do today, I would likely have laughed and brushed it off. Impossible. Faced with the choice between a spoonful of cod liver oil or a dozen meatballs, my younger self would have swallowed the liver oil to get through the torment as fast as he could. The 2013 horse meat scandal did not help open my mind to the wonders that IKEA serves in its canteens, either. I remember counting myself lucky, in retrospect, that I chose driving home hungry over eating at the canteen when my family and I visited the Odense outlet a year before the news broke.

What changed my mind? I wish I could attribute my conversion to something other than sheer deprivation, but I cannot. The pride which convinced me that I could go for a full semester before tasting Scandinavian food again proved misplaced. When I got over the shame of succumbing to eating the meatballs I once loathed, I grasped what I had gained by coming back to IKEA: a way to vicariously connect with my home. IKEA represents a synecdoche of Scandinavia and everything it stands for. The free flow of coffee for IKEA Family Card holders confirms that no other region in the world drinks as much coffee as the place I come from; the absence of waitstaff hints at the “minimalist” customer service Scandinavian restaurants offer; the wooden benches stir memories of the picnic-centered culture I know.

IKEA’s canteen will never win a Michelin star, or even a half-decent review on Zomato. For all but the most deprived Scandinavian expatriates, it remains an option to avoid. But for the few who learn how to cherish mediocre food that harkens back to “home” and much better meals, IKEA and its meatballs hold the countries we left behind within them.