A Justification for the Study of Literature

Not everyone can be a Literature major. I don’t say that easily. I say that with the utmost resignation, as the bags under my eyes get pulled down by another 50-odd pages of Moby-Dick, my designated pleasure read for the semester.

When I tell people that I study literature, I’m faced with one of two responses: a) “Oh, that’s so cool, I wish I could pursue a major that I am passionate about,” which makes me feel like a neoliberal hippie, or b) “Wow, that’s super tough. Literature is tough.” I also get the occasional Starbucks-homeless jibe as one of those quasi-insults that get passed off as gestures of close friendship. I lump these kinds of Starbucks comments into the same category as response b), for the sole reason that being a barista is difficult. I myself couldn’t do it: there’s only so many custom orders I can take before wanting to throw a cup of custom, vegan, non-GMO, family-grown, baby-proof caffeine with a shot of water that is actually composed of baby’s tears and the saliva of a newborn puppy on someone’s expensive tie. 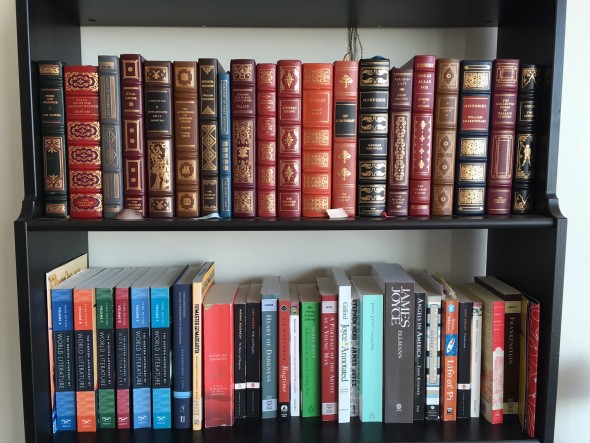 Being a Literature major is hard. And it’s not because of the reading. One of the first things that people assume about literature majors is that we like to read and we must read a lot and reading must be the only thing we like to do — all of which is true. But it’s not the reading that makes it difficult. Anyone can read Ulysses in a day, probably, if you shut yourself in your room for 24 hours and gain sustenance from some kind of IV drip. The act of reading isn’t difficult; you read something everyday. You’re reading this right now. If reading were the only prerequisite to getting a literature degree, then we’d all be Literature majors, and I’ve been wasting my time for the past year and a half.

Literature is hard because of how vulnerable you become. When you’re a barista and it’s rush hour and you’re getting yelled at for putting in two pumps of syrup instead of the standard one and three-point-five pumps that Terry from the Starbucks down the street uses, you’re vulnerable. You’re vulnerable to your coworkers, the person yelling at you, and everyone else in the store. And despite all that yelling and that one guy in the corner secretly videotaping this in the hopes of putting up another Facebook rant on dismantling the throes of capitalism, you don’t bat an eyelash. I mean sure you feel bad, but look, Barista Man – you chose to do this. You signed up for it.

One of the founding ideals of the liberal arts curriculum is that each student, after having sampled every starter in the buffet of Intro 101s, will hopefully decide what they like the best. So, yes, I chose literature (otherwise I wouldn’t be writing this article). But the problem with that is when I read books, I become vulnerable. I would go so far as to argue that even the author isn’t as vulnerable as I am, because at least the author has made peace with what is on the page. When I hold a book, however, am suddenly holding the author, like they’re right there with me. I recently read Jean Genet’s A Thief’s Journal for a class, and I quickly realized that I was reading “Jean Genet.” Whether autobiographical or not, a novel becomes part of its author’s life force. A lot of people say that they like to read because reading lets them lead different lives; I myself don’t get to live a different life when I read per se, but do I get another life handed to me. Every book I’ve read so far has given me a piece of its writer along with it, and God forbid I keep that soul anywhere else but inside the deepest, safest recesses of my mind. You’d think that it’s hard enough to make sense of your own thoughts, but all of a sudden you have someone else’s jumbled up with yours and you have to begin to sort through the mess.

I haven’t even talked about what happens when a book makes me uncomfortable. If a book makes me uneasy, then the issue for me becomes more complicated. Not only do I need to be able to digest what I’ve just read, to chew it slowly and wait for my intestines to absorb its nutrients, but I also have to deal with how it makes me feel afterwards. Sometimes it leaves me with a dull ache in the bottom of my stomach, my lower right side to be precise. It is in those moments of unease that I take a scalpel and examine the root cause, attempt to find out which proteins in my body are refusing to digest the food. It’s not an easy task; sometimes it takes hours, and sometimes when sleep becomes too elusive I get tempted to forego the operation completely.

It is important to see the operation through, however. Only when I get to interact with all the insides of me do I learn what makes me tick. Again I am vulnerable; but this time, I am vulnerable with myself. Being vulnerable in front of other people is easy, because at the end of the day no one remembers that you put in low-fat milk instead of skim. Being vulnerable with yourself, though, is hard: I’ve tried it, and I’ve quickly realized that I don’t accept any bullshit. You see, the author is better off because she has already undergone that process of vulnerability, otherwise there would be no book to begin with. I, however, go through it again and again and again every time I read a book. Because, at the end of the day, every author writes the world differently to how I see it. I can’t do anything about that, since its their words on the page. I have to be able to sit in this position of conflict between these two opinions and choose to resolve it on my own, because the words do as they please.

English classes in high school are well-known for the idea that you can write anything you want, as long as you justify it. That may be true, but there’s always another level to it. Justifying something well is difficult. Any sort of university student with enough desperation and 3 cans of Red Bull can write a quick essay about the subjectification of women in Shakespeare’s Hamlet, but to sit down with a text and really be able to see what it’s saying is difficult. The text doesn’t help me at all. It doesn’t say anything, because it’s an inanimate object. Of course the texts say something, but books aren’t very good conversationalists. They’re kind of selfish, actually. Some of them think that what they’re saying is so blatant, so obvious, that to slave overnight to figure out what the elusive “it” is seems trivial. And sometimes even the best of us can’t get that message right away. Of course a text matters, but to figure out the whys and the hows and the whatevers entails a lot of reading, yes, but also a lot of thinking about how and why you’re reading the text the way that you are.

So no, you can’t just “say anything you want”. Life (and literature) isn’t that easy, and No Fear Shakespeare can only get you so far. I’d like to think that if someone has exposed her soul to you and has let you into the inner workings of her mind, it’s only decent to sit with those thoughts and really flesh them out rather than type any random mumbly-jumbly-hoo-ha on the page and think that you’ve fully understood the book under discussion. Maybe literature is about courtesy. You wouldn’t just walk away from a conversation, so why would you do that to a book?

The classic way to end this sort of article is to give a grand, sweeping soliloquy on why I choose to study literature despite these difficulties. A cop-out answer is to say, “I don’t know.”

I think I do know why I study literature, though, and in an odd way it’s because I don’t know: I don’t know who I am yet. I thought I knew who I was two years ago, but thinking back, I realize that I’m now a completely different person. I choose to study literature because I know that if I don’t get a handle on who I am versus who everyone else is, I’ll just keep swimming like a tiny little guppy. And the only way to really get a good handle on who I am is to allow myself to exist in this state of vulnerability, day in and day out for as long as I’ve got time. Maybe that makes me selfish, but it’s the only way that’s made any sense to me so far. Maybe the farthest I can get with my education is a manager at my local Starbucks, but while I’m serving you your regular IV drip of caffeine at least I’ll know that every add-on you ask for means something. It’ll be obvious to you, of course – only barbarians drink their coffee without a splash of rose water and the faint hint of a baby’s first laugh – but I won’t get it at first. But maybe after your fourth, fifth, sixth drink, I will.