Notes from the Bwindi
Impenetrable Forest

We awoke at six in the morning’s utter darkness and showered by torchlight in order to get to breakfast by seven. Our guides were already scouring the adjacent national park for a family of habituated apes we could visit that morning.

When we arrived at the Uganda Wildlife Authority outpost just inside the gates to Bwindi National Park, the head of the visitor’s center said that his advance team have found three families in the vicinity: the Mubare, Habinjanye, and Rushegura families, ordered in a crescendo according to how strenuous the trek to reach them would be.

I chose the most strenuous trek, not because I have any illusions about my abilities as a hiker but because the pictures of that gorilla family mesmerized me: they seemed just as cohesive a family as my human one, complete with a hierarchical family tree: one silverback patriarch, four junior “blackbacks” who would soon contest the silverback’s supremacy, two adolescent boys, two adolescent girls, and three mothers each with a male infant, ranging in age from two years to four weeks. 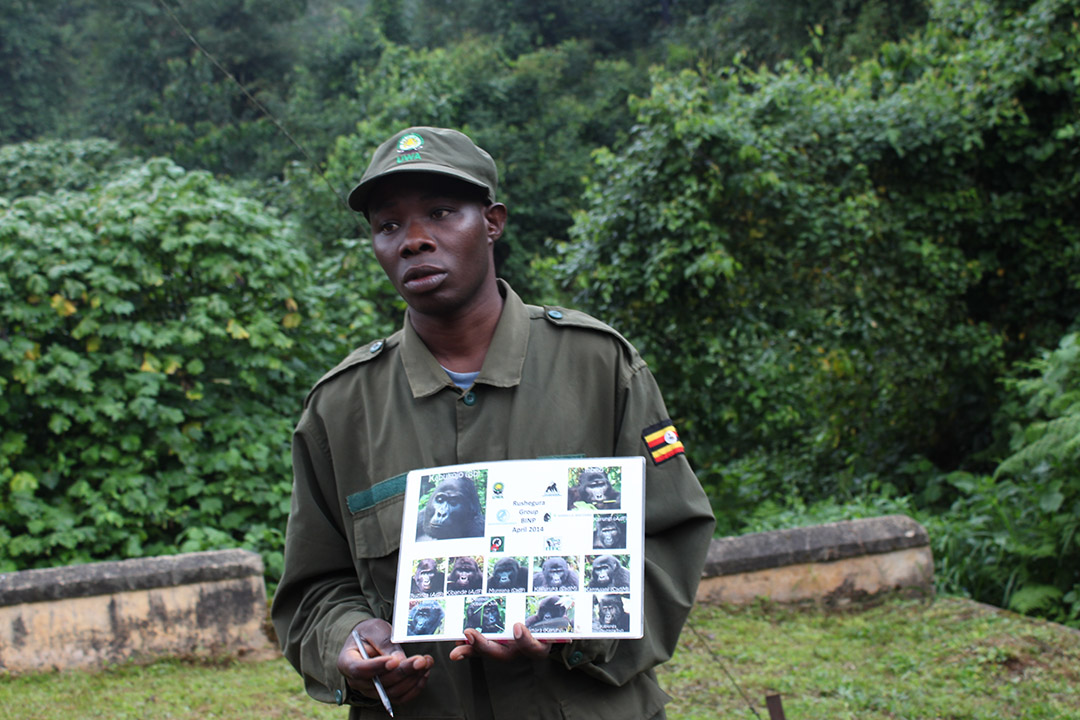 On our hike up to the Rusheguras, we measured our progress by the increasingly slight signs of human interference we saw: From our lodge near the entrance to the park via three SUVs to the sturdy but simple visitor’s center inside the park, we went into the rainforest along the ‘R’-trail that took us past the center’s backyard generator (diesel-fueled by the smell of it) and sewage facility. From the backyard, we walked through a short stretch of dense secondary forest, across three increasingly rickety, seemingly collapse-prone plywood bridges in quick succession, into a lush river gulch, up a slight slope, at which point we started our ascent along a dirt path which gradually narrowed as it grew ever steeper and took us higher up the mountainside. Halfway to the summit, the designated path had become indiscernible from the rest of the hillside, though it was not clear at which point during our ascent we had stopped following a well-demarcated trail.

Climbing the second half of the mountainside, we felt increasingly as if we were walking on the tattered fringes of the known world, at any moment prone to teeter over the side of the mountain and roll down the three-hundred altitude meters we had gained on our trek, or to come upon a flock of forest elephants or a spitting cobra (both of which animals are known as the most aggressive species in their respective families). We simultaneously wondered when we would finally cross that subtle barrier separating civilization from sheer wilderness – when would we reach the elusive, sacred grounds of the mountain gorillas?

As we paused to rehydrate after scaling the summit, our trekker reviewed the safety precautions he had issued at the foot of the mountain. While he told us to drop our walking sticks as soon as we saw the gorillas (before mountain gorillas were designated as a protected species, most gorilla hunters used spears to slay the apes, so the sight of a wooden stick might still scare or infuriate older, mentally scarred gorillas), our trekker got word from the advance team that the Rusheguras were within half a mile from us.

“When would we reach the elusive, sacred grounds of the mountain gorillas?”

The advance team made a series of what the guide called “human gorilla” calls, sounds which resemble monkey cries enough not to aggravate the gorillas but which still sound distinctly human. These calls inform the trekker about the location of the advance team, and thus of the gorillas. We heard the calls to our right and made our way to the gorillas by hacking a path through the underbrush, prepared to drop our sticks when a ten-year-old Rushegura blackback strayed from the family and wandered directly into our path. When he saw our twenty-one-person party, all of us wielding walking sticks, he grew understandably agitated, and arched his back. He prepared to charge and probably would have, if only he were not outnumbered twenty-one to one, had our two accompanying rangers not wielded AK-47s with live rounds, and had our porters not been so quick to relieve the tension by collecting our walking sticks and making us back up twenty meters. Now unarmed (save for two guns and three machetes, of course), we could approach the blackback and witness his retreat into a particularly dense patch of rainforest, inside which we came across the Rushegura’s three other blackbacks. Then, in a particularly blood-stiffening moment, we glimpsed a touch of silver flicker in the bush. Our trekker chopped his way in the general direction of the silverback and uncovered a meadow in which a mother lay holding her month-old cub. 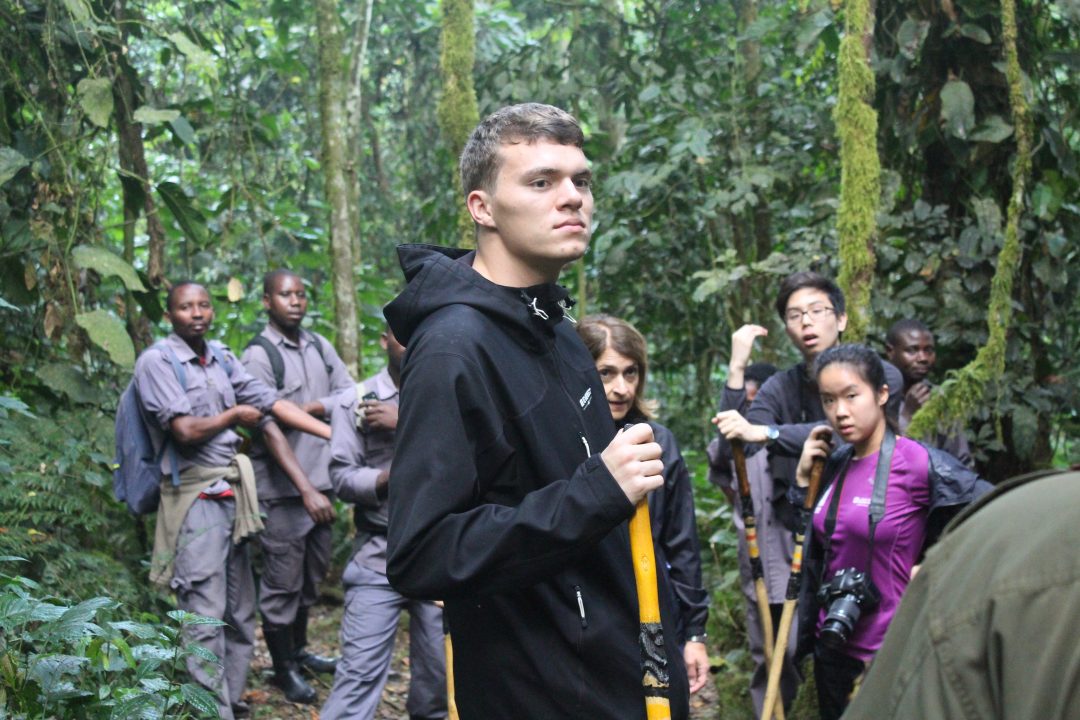 At the edge of the meadow.

To prepare for this hike, we read about “profound interspecies events” and asked in disbelief if our first-hand encounter with the gorillas would really make conservation activists out of us; while I cannot say I became a vehement gorilla activist in that very moment, I can think of few scenes more conducive to a profound interspecies event with mountain gorillas than watching a mother nurse her newborn while the silverback male looms ominously in the shrubs behind her.

As we circled around the mother and child at the prescribed twenty-foot distance, we came upon a juvenile gorilla in a tree. We stood in a crescent facing the mahogany tree from which the two-year-old juvenile dangled when someone pointed to a patch of fur on our right. Had we not had an unobstructed view of a two-year-old gorilla playing in a tree, we probably would have cleaved our way toward the patch of fur on the right, but at this point in time, we were so oversaturated with first-hand gorilla encounters that the prospect of seeing what was hiding to our right seemed less exciting than staying put. Only when our guide announced that the ape we had eyed to the right was one of three gorillas in the process of eating lunch did we break the crescent and follow our guide into another clearing.

The meadow we inhabited was an area about the size of a university dorm and currently had a population of seventeen: three gorillas (two mothers and a four-month-old) and fourteen humans (five students, one professor, one Global Academic Fellow, two rangers, one trekker, and four persons from the advance team that had located the Rusheguras), but that number would increase by two in the twenty minutes we spent there. First, the two-year-old we had seen in the tree climbed down to harass his younger brother/cousin (gorillas are notoriously incestuous) by pulling him down from a branch every time the poor toddler tried to climb it. Later, their father walked into the meadow, and we finally got a frontal view of the family’s most photogenic member, the seventeen-year-old silverback. He had not been in the meadow for five minutes before he started chewing on the branches one of the females had snapped in half for him to eat – an assertion of male dominance which seemed hard not to think about in anthropocentric terms. How astonishing that patterns of male subjugation of woman and blatant gender discrimination is a cross-species phenomenon!

Of course, what amazed us most as we stood in that meadow, no more than fifteen feet from our genetic cousins whom climate change and geopolitics have driven to the edge of survival, was not the behavior of the gorillas so much as the sheer improbability of what we were experiencing. We were deep inside a thicket, on top of a mountain ridge, in the middle of an aptly-named “impenetrable forest,” in a part of the world which remains inaccessible to the vast majority of travelers; how could we possibly abstract from the unlikelihood of what we were experiencing? Our expedition to find ‘uncontaminated’ nature or its closes substitute had taken us so far from home that most us knew we would likely never experience nature in this way again. 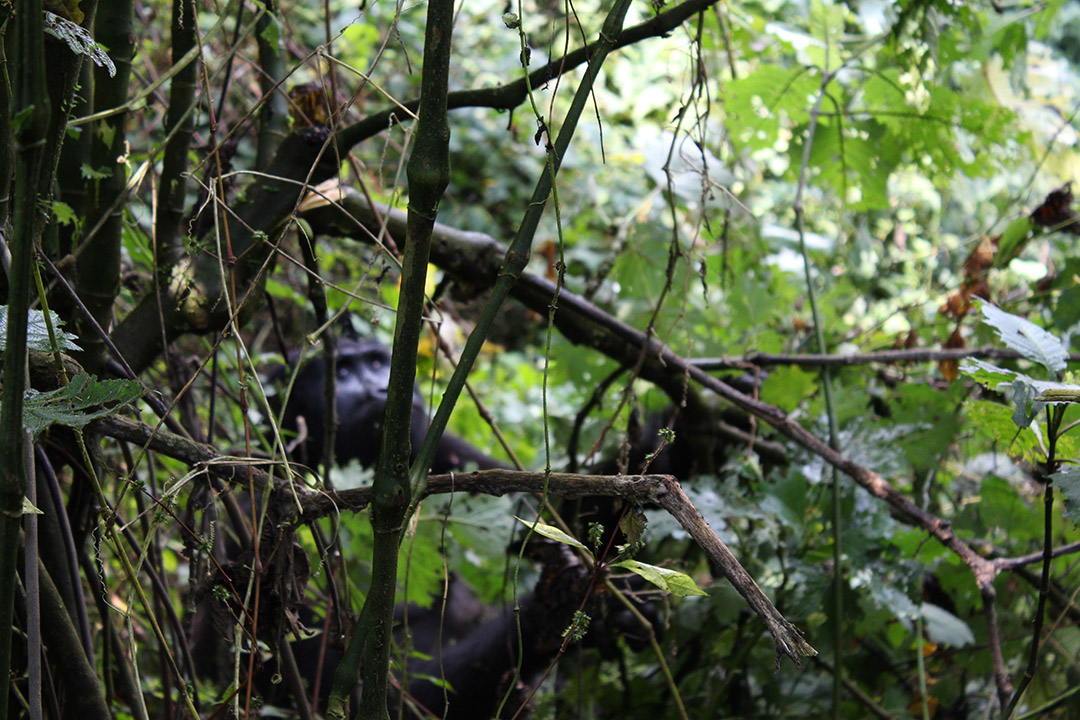 A mountain gorilla mother with cub hide in the thicket.

We watched as the silverback ate the pre-snapped branches and noted with astonishment that a particularly big-stomached female who had already been eating before the silverback came onto the scene did not care to follow him when he walked out of the meadow to take a nap in the shade of a low-hanging tree; she chose instead to remain seated and stuff herself, the remains of snapped and chewed canes strewn over her protruding chest. We marveled at her appetite and only moved into the shaded area where the silverback was resting when she got up to join him. Our allotted hour with the gorillas elapsed while we were rudely intruding on their midday nap, and we sensed that we came close to having overstayed our welcome as we left the Rusheguras: When we made our way back to the porters who had stayed behind with our walking sticks, we came upon the remainder of the pack, a group of juveniles whom we had not yet seen, and noted a distinct change in their body language. Where the other gorillas had taken minimal note of our presence, the juveniles arched their backs in unison, as if to encourage us to make ourselves scarce. We did; our trekker had just told us that even a juvenile mountain gorilla has enough arm strength to tear a human limb off with a single, swift jerk.

We made our way down the mountain ridge along the same path we had used to reach the top, more tired and sweatier than before, but enriched by one of those vexing and perplexing experiences that leaves you with many memories and even more questions: Are gorillas still wild if they graze your leg as they pass you and think nothing of it? Will the gorillas be here when my parents see my photos and decide that they also have to visit? Is the Rushegura family to mountain gorillas what the giant pandas in China’s intensive panda breeding programs are to their species: a sacrificial population whose life quality we readily diminish in the name of saving the species? Are we making the gorillas’ problems worse by going on “last-chance” tourist trips? Are we alleviating the issue? Do we care? These and more questions raced through my head as we made the long trek down the mountainside and noticed how civilization gradually became more discernible around us.

Nikolaj Nielsen is a student at NYU Abu Dhabi.

BY THE SAME AUTHOR 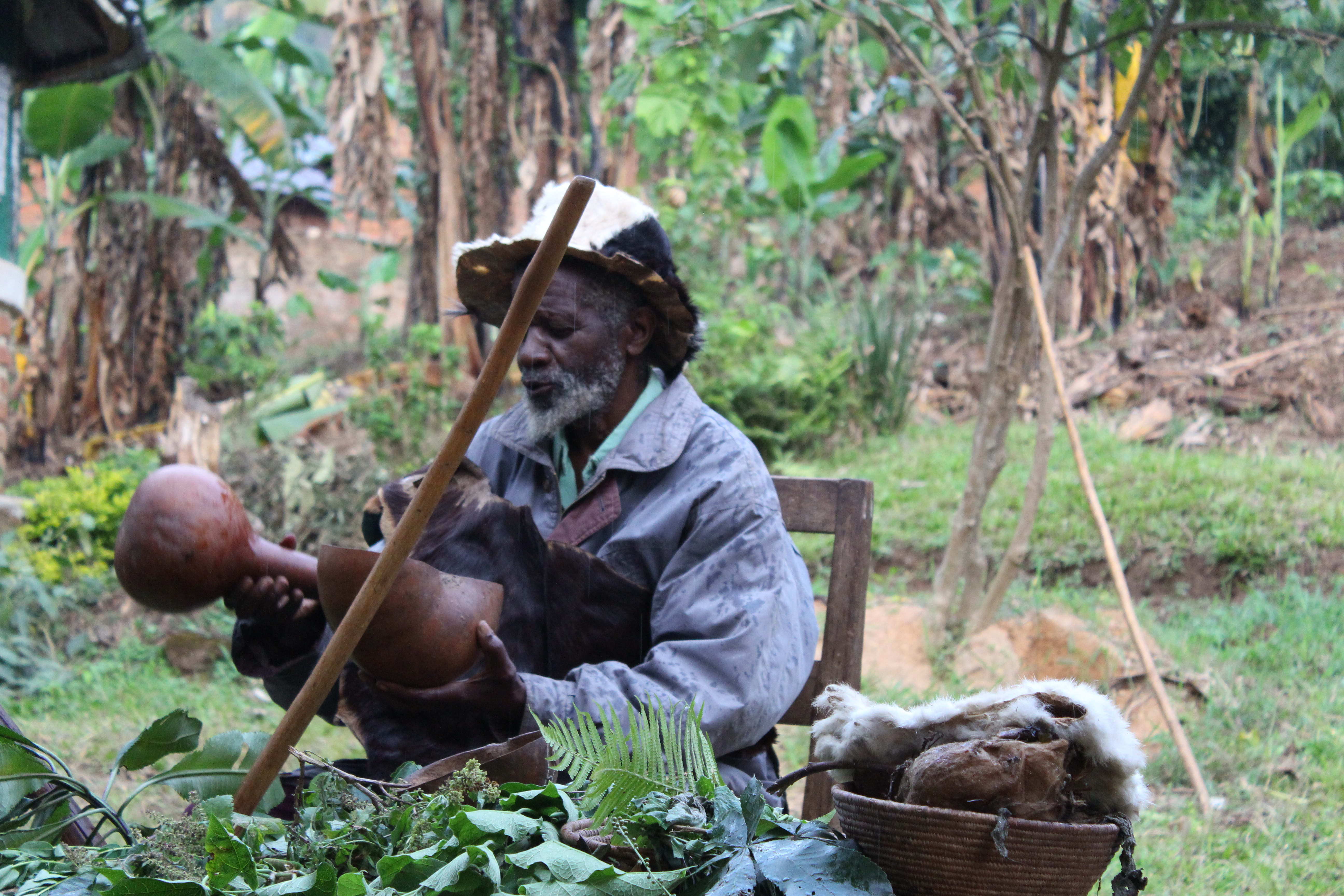 Looking for Nature (I) 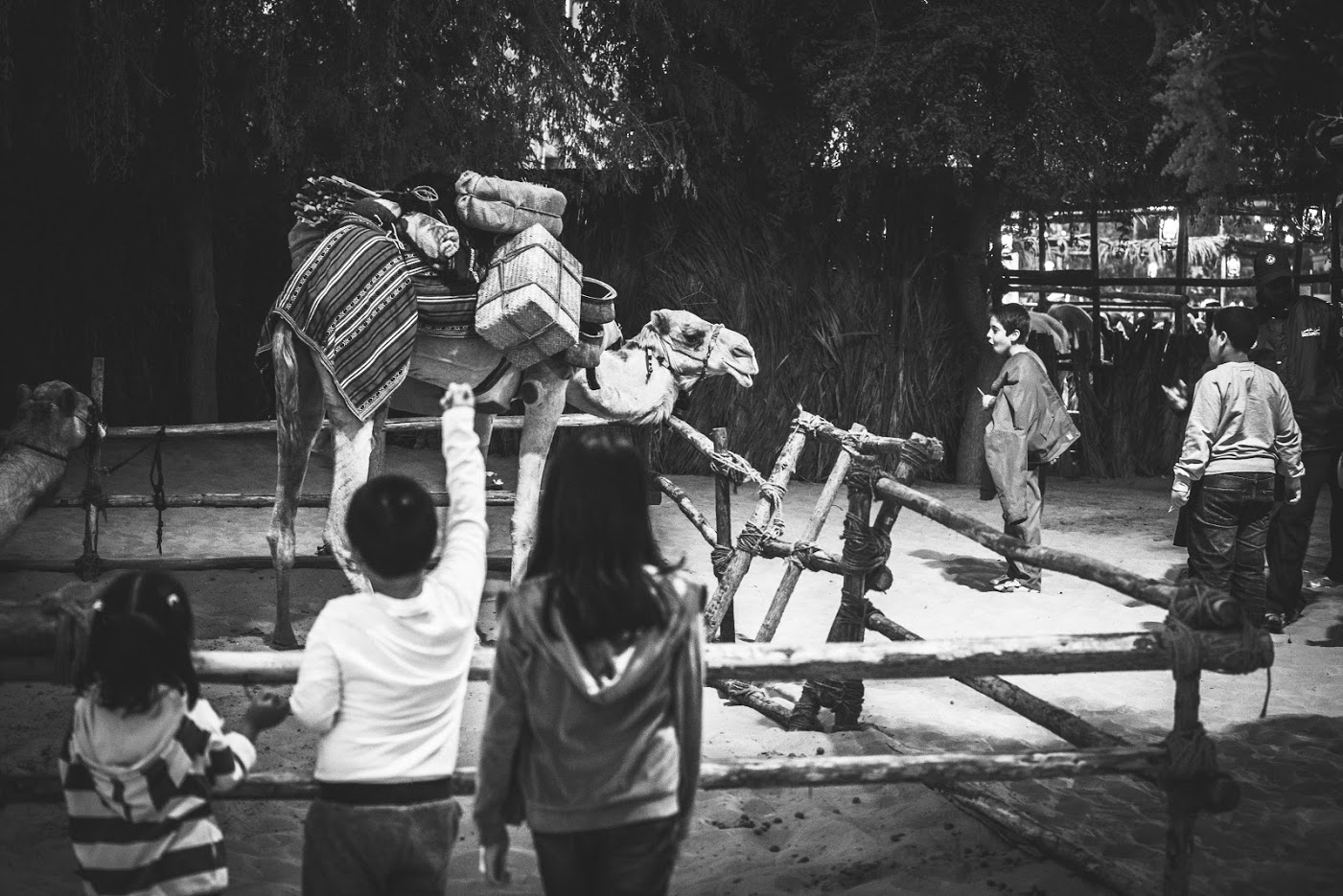 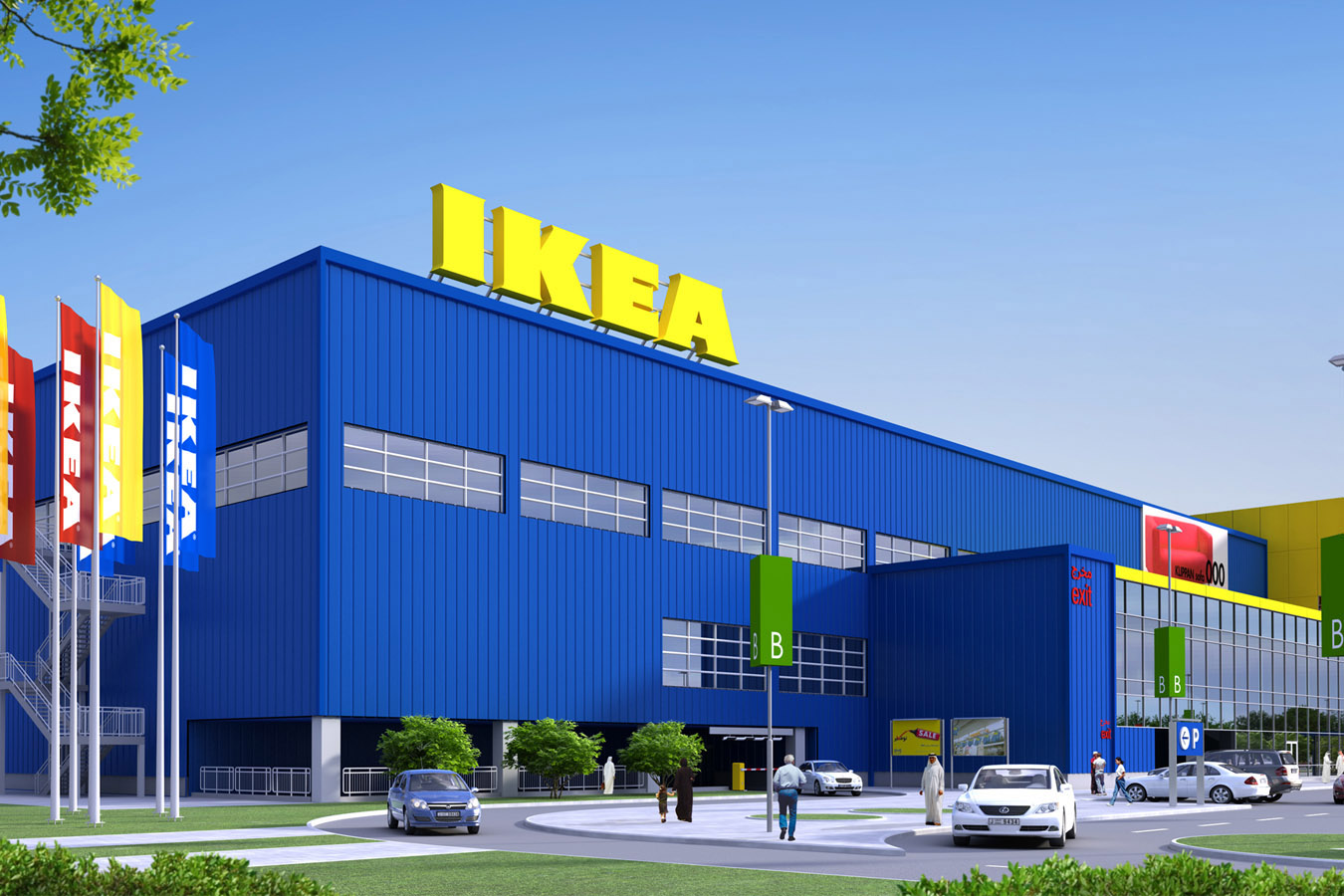