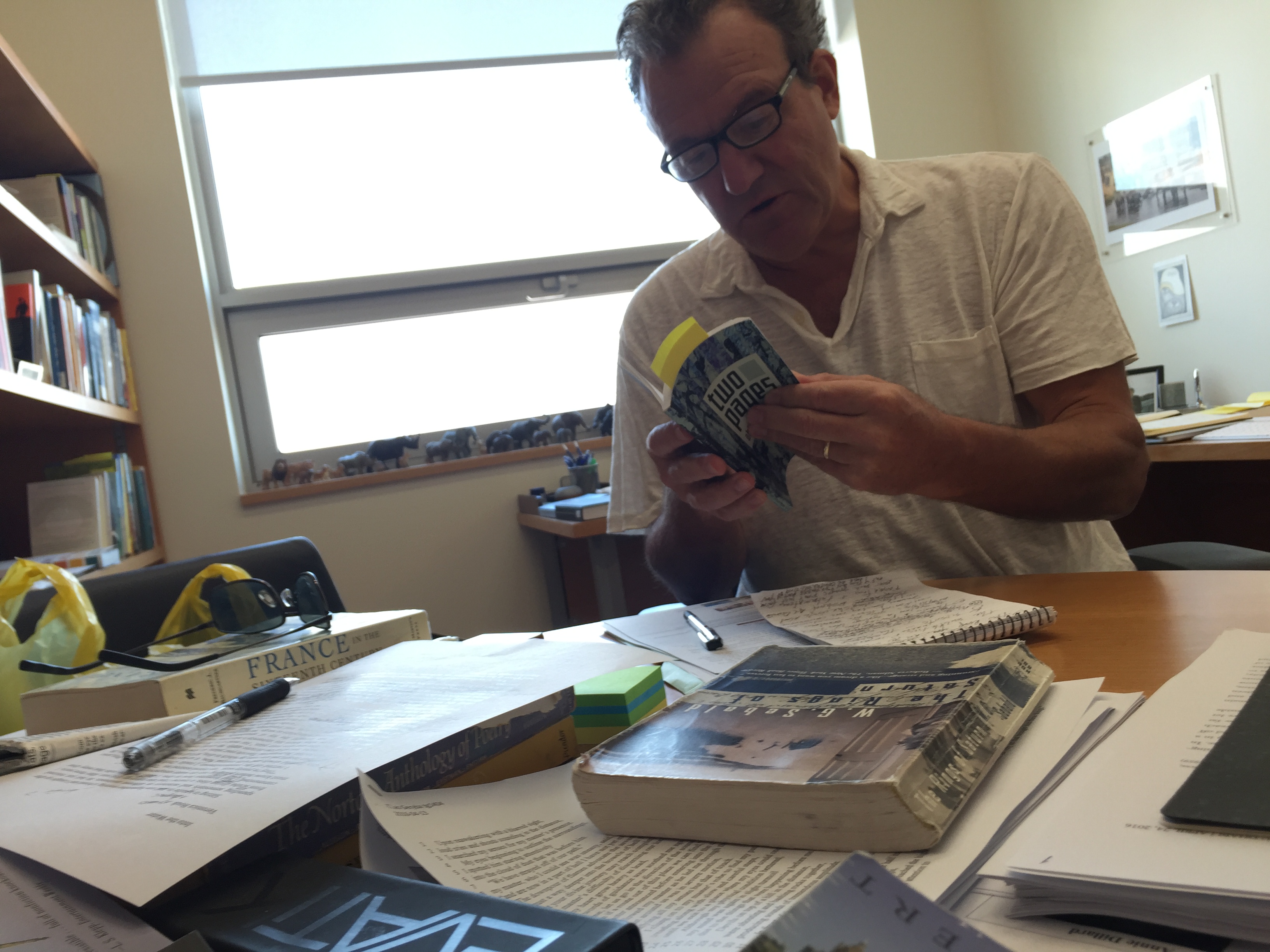 In the third part of Sebastián Rojas Cabal’s interview with Charles Siebert, the pair discuss the teaching of Creative Writing at NYU Abu Dhabi.

Teaching full-­time here has been a new experience for me. I’ve only done visiting professorships in the past. I was a bit apprehensive at first about teaching Intro to Creative Writing and have to cover so many different forms, like the personal essay, fiction and poetry. I mean it’s one thing for me to have stuck my nose back into poetry, my roots. I began my writing career as a poet. But it was really exciting today. We’d been doing the personal essay before. It was unbelievable to see how excited everyone was. I’m still getting a little resistance on the writing of it. But the reading of it­­ I think to have six students flipping over T.S. Eliot’s “The Lovesong of J. Alfred Prufrock,” you know, a poem that was written back in 1910. They were responding to it like it was a contemporary work. So that was pretty cool. That was fun.

I’m also having them read persona poems, where the poet, you know, takes on the persona of some other person, like James Dickey’s “Lifeguard,” a beautiful poem in the voice of a lifeguard who can’t save a drowning boy. And­­ Sylvia Plath’s “Lady Lazarus,” imagining herself as Lazarus, coming back from the dead. Incredible.

In my feature writing and travel writing courses in which students are asked to compose a long-­form narrative work of creative non­fiction I have to tell everyone, “Stop leading with your premise. This is not an academic paper. Just find the stories that add up to your premise.”
This student down in Ghana kept saying, “I wanna write about the justice system in Ghana and how it’s the antidote to the corruption and nepotism of the government.” I’m going, “Okay, but I don’t want a thesis, okay? Sit in the courtroom. Be an observer. And find the stories that add up to what you just told me. You know, ’cause if you go the other way, you’re gonna write me a term paper. And I don’t want a term paper.”

And that’s what’s been the hardest thing to get across here. And a lot of that’s a function of age. I couldn’t do what I’m doing now at the undergrad level. You know, I too was filled with my premises and my theories and the only escape I got from that was writing poetry. I understand the impulse. It’s not until you get a little older and a little more worldly and do this for awhile, where you’re out in the real world listening to people’s stories. I’m not a reporter. Not by training. I’ve never had a journalism class. But I just figured that stuff out by virtue of wanting to tell a good story. And for telling a good story you gotta ask some questions and you gotta go see things and then give the world back to readers in as compelling a way as possible. But I still miss poetry. There are so many days where I just go, “Should I just go back? You know, just throw all this away?”

Siebert and Cabal deep in conversation.

Q: But do you think training as a poet has somehow fits with your life as a creative nonfiction writer?

A: I was very conscious of form when I wrote poems, else why write it? And I think being highly attuned to and conscious of the form of free verse poems especially, and how it’s shaped, the beginning, middle, end, I think somehow it gave me an instinctual sense of how to structure a long-­form narrative piece. We talk a lot about the structuring of a narrative piece in the feature and travel writing writing classes. So I think that’s one way.

Every time I gotta go into a science section, or weave science in, I do it through metaphor that makes you see it.

The other way that poetry helped is what we discussed earlier about the function of metaphor. That works so well for so many of the kind of pieces I write now because they deal in these unseen landscapes of science. There’s not a piece I write where at one point I’m not talking about things like the neurons that are attached to empathy or that get wounded in trauma or where I’m not talking about cells and the makeup of cells, and where viruses came from.

Every time I gotta go into a science section, or weave science in, I do it through metaphor that makes you see it. Thus, for example, my friend Francisco Goldman, who had me up at his class at Trinity College in Hartford. He asked me, “You know, where did you come up with this line?”And it was something to do with the crooked streams and blown­-out bridges of an embattled psyche or something like that. And of course at the time I was thinking of the first war when we first came up with the idea of shell­ shock and war trauma. Well when one thinks of the First World War you think of those dreary landscapes of muddy trenches and barbed wire. And the blood and rains in crooked streams. So that’s where I came up that image. But that’s what it is, giving a physical shape to unseen inner landscapes. And that’s the challenge of writing today. It really is, that’s what we’re facing more and more. And that’s where poetry couldn’t be a better tool.

Q: What has it meant to you, to be a professor of practice?

A: I still don’t know. When I arrived here and saw that on my door, I just kind of chuckled. I had actually seen it because Judy Miller, who hired me, sent me something very early on, saying—oh, it must have been the contract—“And you’re to be known as a professor of practice.”

And I just went, “What? That’s kind of weird. It makes me sound like all I do is practice. “Yeah, he’s just in his office, practicing.” I guess it fits, in the sense that what distinguishes me from other professors here is I’ve really not lived in and worked in academia for the majority of my life.

So now that I’m teaching it, I can also say I’m doing it. I’m still out there, doing it. And I’m really proud of that. I think it makes me a better teacher. Because I don’t wanna just share my past enthusiasm for this form of writing. I wanna have people seeing me sweat over it now. Because it’s like your struggle. So it makes me a better teacher. I don’t mind talking about myself in class. I don’t wanna do it to a braggadocious sense or anything. I do it only in a utilitarian sense.

I use myself as, you know, a case in point, the guinea pig. This is what this feels like. I tend not to like to teach my writing because there’s so many good writers out there. But I was really happy about getting this parrot piece out. This was one of the few times I’ve had to write a piece like that, you know, while teaching. I wrote another one that wasn’t as complicated while at Columbia last year. Here it was really hard ’cause of the time difference. The week of closing that story I was up until 4:00 in the morning, four nights in a row,

Q: Have you had any ideas for a story based in Abu Dhabi?

A: A couple have perked up. I already knew coming in there was potential with the falcon hospital. And something about displacement and a conversation actually that I had with you—very early on last semester—that I actually thought of incorporating into the opening of a book called The Anatomy of Empathy. I have started writing it from time to time. But I’ve been too busy to get too far with it.
When I first got here I also wanted to start keeping a memoir, or a diary. But I don’t keep diaries. I keep notebooks perpetually, but I don’t keep diaries per se. But I kinda thought, that probably everybody and their mother’s had this idea: “I’m gonna write about a book about teaching in Abu Dhabi or my experiences.” Who knows …

But I do love the teaching and I do like the fact that I’m forced to read a bunch of books or revisit books I haven’t visited in awhile. That’s fun. Although I’m a horribly slow reader. So it’s tough work for me. You know, just like, “Oh, don’t read the whole book. Just read chapter four and five.” And I’m doing that just to give myself a break.

Q: What do you think of teaching classes like Intro to Creative Writing or Future Writing or Travel Writing is doing to you as a writer?