There’s a Metaphor
in There Somewhere

It should come as no surprise that I really, really, really like books. As soon as you saw this letter from me, you probably thought “I bet this is going to be about books”. Good guess.

We returned to the Platonic idea of each man having a specific nature in my Ethics class today, and I think my specific nature is more of the bleached-paper-and-PVA-glue type. I like books. I’ve bought too many books since coming to London, an undisclosed amount which should keep me up at night thinking of all the sterling pounds I’ve spent, but really doesn’t. Because I have the miracle/curse of having one class a day, I’ve spent a lot of time exploring the city on my own. What I’ve discovered thus far is that the specific nature of London , or at least of my London, resides in its bookshops. I’ve probably been to every bookshop within a 30-minute walk from my flat in Russell Square. I’ve been to Skoobs—two minutes away and therefore a very tempting distraction when I can’t be bothered to write an essay—many times. The last time I was there I walked out with three books: one on Miles Davis, one on Jay-Z, and one about music in the twentieth century. All for 15 pounds (78.80 AED). Isn’t that insane? 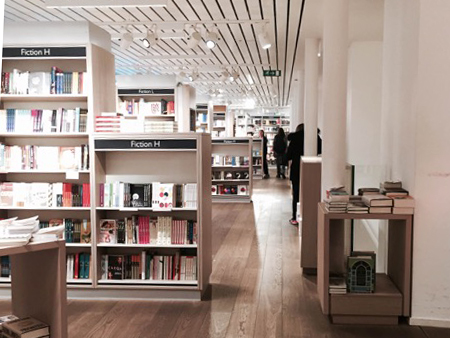 I can find my way to these bookstores well enough that if I were to be reincarnated into a pigeon I’d probably find myself flying to these same places every day. The funny thing is, though, that stepping inside them is different. See, the thing is that these bookstores are huge—or yuuuuuuuuuuuuge, as the next Republican nominee for President of the United States likes to say. Two floors seems to be the minimum, even in secondhand shops, with some shops having shelves that literally touch the ceiling. How the hell am I supposed to reach up there? These bookshops seem bereft of ladders, which makes me think that the sellers are saving all the best books for themselves at the top. I mean, there’s also the fact that the average height of a British citizen is a good 10 cm taller than my current height, which isn’t too bad but maybe 10 cm makes all the difference. You know how hopeless I am at estimating things, so it’s not like I would know. Part of the reason why I keep coming back to certain bookstores is to think of new ways to reach these hidden books. I’m not even sure if I want them, but just the simple fact of them being out of my reach makes me want them more. I mean, I could be missing out on the book that defines my life. My whole life! I suppose I could ask for help from these aforementioned 10 cm taller individuals, but I’d rather be left to my own bearings. My pilgrimages are very personal events, you know.

These bookshops, these quiet areas where I constantly lose myself, become markers through which I can find myself in a busy throng of people.

But in all honesty, I get lost every time I go in. Doesn’t matter where it is—Skoobs in the Brunswick, Foyles on Tottenham Court Road,Waterstones on Picadilly/Tottenham Road/Gower Street, London Review Bookshopon Bury Place, Libreria Bookshop in Brick Lane—I know how to get there, but I get lost the second I step inside. I don’t even know what I do, or how I decide what books to pick up … does anyone? I don’t know. I kind of just walk around, maybe sit down and have some coffee (a lot of these bookshops have cafes in them, which reeks of capitalism but I’m too deep in it to care). Sometimes I get a flat white, but sometimes I get a latte because it’s often 10 pence cheaper, which doesn’t seem like a lot but really does once you’re a budgeting college student like I am. Sure, I could take the tube to Chinatown instead of walking for 20 minutes, or I could use the 2 pounds and 40 pence to buy a Pelican book on the origins of plastic. I mean, it’s not even a contest.

My London bookshops have become part of my routine and I go to a different one each day. So that means that each day, you can find me pacing up and down the aisles, picking stuff up and putting them down again, and being a quiet nuisance who doesn’t even spend any money but will sometimes cave in and buy 5 new books in one go. Throw me into the city again, however, and that’s different. I don’t even need Google Maps at this point, I’m so well-acquainted with the area (area being an ambiguous term, by which I mean whichever Bookshop Area I am currently in) that I’ll even take the side streets home just for kicks. Isn’t it funny? These bookshops, these quiet areas where I constantly lose myself, become markers through which I can find myself in a busy throng of people. I guess that’s kind of ironic, considering that as I was leaving class I overheard these two girls finding directions for this, like, really good Korean place? that costs around 6 pounds? and is, like, really popular? and also super near?

FYI, the Korean joint she’s talking about is two minutes away from campus. Honey, you’ve been here for a little over a month. Get it together. I’ve eaten there at least four times in the past two weeks. It’s also a straight walk to the London Review Bookshop and the adjacent London Review Cake Shop, also known as the place where all time recedes into a vacuum.

But see, that’s what I’m talking about. I saw a play yesterday near Trafalgar Square and decided to walk back home instead of taking the tube, because it’s only a twenty-minute walk from Trafalgar to Russell Square. But in a bookshop, in my London bookshops, I get lost all the time. Not to say that getting lost is a bad thing, of course. When you walk around in a new city, getting lost is half the fun of it. Getting lost in a bookshop, however, is marginally better, in part because books can’t physically speak and are therefore quieter than the hordes of tourists in Piccadilly. Also, books don’t push you around when you’re trying to cross the street at a busy intersection.

I just came back from one, actually. I saw Ahmet Hamdi Tanpinar’s The Time Regulation Instituteagain, this time on the tippitytoppiest shelf, making out with the ceiling, out of my reach. Most importantly, out of my credit card’s reach. Just as well, I suppose, because I’m still making my way through the other book I bought a couple of days ago. I tell myself I’ll be back eventually…maybe tomorrow. Okay, definitely tomorrow. And, as I stood there staring at The Time Regulation Institute—should’ve I took those growth pills as a kid — I thought of all my London experiences, which made me think of you, which made me write this letter. I hope you’re well.

Surprisingly enough (or not), I’ve still got a list of books I want to buy. Tanpinar’s is one, along with Han Kang’s Human Acts and Dickens’ Bleak House. I will only allow myself to buy one, though, so I’m giving myself a month to decide. I know I could go to a secondhand bookshop and save myself some cash while I’m at it, but I only go to the secondhand bookshops if I don’t have anything in mind in the first place, because most their charm comes from the search (case in point: Márquez’s Love in the Time of Cholera for 3 pounds, aka 10 AED – are you f***ing kidding me?). See, I already have a system devised for myself. It’s that bad. Furthermore, it seems counterintuitive to keep going back to bookshops while simultaneously banning yourself from buying anything, as if Alcoholics Anonymous were to have their weekly meetings in a wine cellar. I know that I could avoid going into a bookshop. I know how to avoid them, and I guess there are other things in this city worth exploring, but I can only go to the British Museum so many times before the stench of colonialism and oppression sears my scarf; at least in a bookshop, I can just forego any Kipling novel. Keep in mind that this city is expensive. Really, really, really expensive. You can go into a bookstore for free—and leave for free too, if you can manage to avoid buying anything. I can only visit a bookshop so many times though, before I end up convincing myself that yes I do need the biography on Basquiat, especially since I’ve glanced over it in the last five bookstores I’ve been to.

London has a reputation for being a literary city, but it isn’t really that evident when you first get there. I mean, I guess you can’t really expect people to be wearing “I LUV JANE AU$TEN” sweatshirts or whatever, but I like to imagine that Londoners know they’re walking around in a literary powerhouse. I suppose in reality, though, most people don’t care that much. That’s why I was delighted to overhear a conversation between two booksellers about who should have won the Man Booker prize last year. I’m still making my way through A Brief History of Seven Killingsmyself, so I refrained from jumping into the conversation. However, as I’ve just finished it, I think it’s high time that I go pay them a visit and give them a piece of my mind (that being that Marlon James did, in fact, deserve to win the prize). Then again, I haven’t read most of the other novels that were shortlisted, so I can’t make a sound judgment as of yet. Maybe they’ll have a copy or two of Francis Plug laying around.

LITERATURE AND CREATIVE WRITING
Interview with Charles Siebert (I) 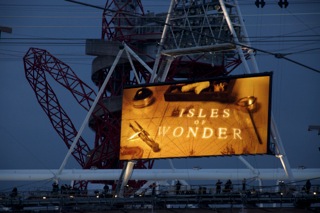