Your phone rings. It’s a text message. “Majd …” it says. It is from your wife, Nour. “Do you remember the time we visited Harasta with Adnan and Qamar?” A few seconds later, an image appears on your phone: the ruins of a city, half-standing, through the window of a car. After Nour sends the image of the ruins of Harasta, the messenger layout rises, revealing three options of emojis: a disappointed one, a surprised one, and one with X eyes.

Bury Me, My Love, a video game by The Pixel Hunt, Figs, and ARTE France, follows Nour as she leaves Syria to find a better life in Europe. The player is cast as Majd, Nour’s husband who stays in Homs, and must communicate with Nour through the game’s WhatsApp-like interface. As Nour moves on her way to Europe, she must make decisions, often turning to Majd for reassurance or opinion. The play aspect of Bury Me, My Love thus relies on making choices. Alhough the action of choosing which emoji to send seems at first to be inconsequential, the choice may end up profoundly affecting Nour’s journey. 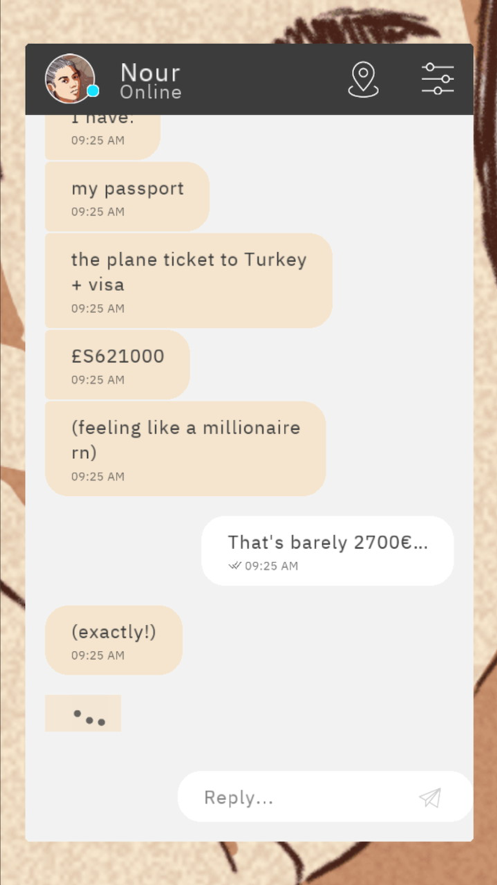 A still from Bury Me, My Love on the Nintendo Switch, taken during gameplay.

Some choices are more consequential than picking emojis: should Nour stay in Damascus and wait for a bus to Beirut, or go to Aleppo to try to cross the border to Turkey; join a refugee march that will walk from Serbia to Hungary, or spend what limited money she has to take a train instead. There are also some more light-hearted choices, like Majd telling Nour he remembers his mom’s way of fixing a zipper or he doesn’t. Sometimes, the player can choose between dialogues and emojis, showcasing the different approaches to one single situation that can alter how the story plays out. The last way that Majd can respond to Nour is by taking a picture and sending it to her, though the points where Majd sends a picture are limited, and there is no choice to be made: only the picture can be selected, but there is a small minigame where the picture must be focused. In instances where there is no choice to be made, Majd texts on his own. Since the player interacts when there is a choice to be made, it seems that taking pictures is more of a formality to give the player agency beyond words and emojis.

Bury Me, My Love’s interactive method of storytelling places it within the genre of the visual novel, a form characterized by the player’s control over the story through available choices. Thus, players read through the story and are then prompted to pick an option, making decision trees a defining feature of the genre. Bury Me, My Love, however, does not provide the sort of visuals one would expect from a “visual novel” (compare, for example, the still image of Bury Me, My Love with that of Ace Attorney shown below). 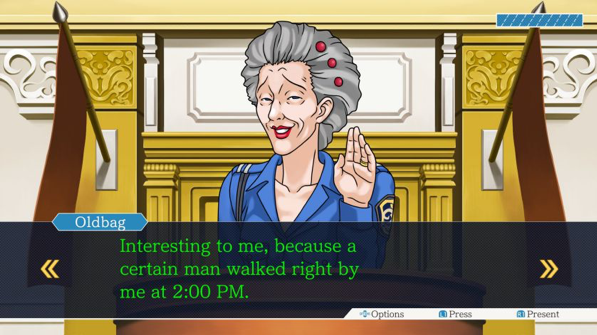 It would be more accurate to call it interactive fiction like one of its inspirations, the game Lifeline, in which the player receives a message out of the blue. It is from an astronaut, lost on a strange moon after their ship crash-lands. After a first introduction to what happened, the astronaut says their name is Taylor (it is never specified whether Taylor is a he or a she). From there on, it is the player’s role to help them survive and find out what happened. Given the decision tree, however, there are multiple endings to Taylor’s story. A handful of them result in death, a couple result in survival, and fewer yet result in answers to the questions Taylor has about what happened. Though both Bury Me, My Love and Lifeline feature an interface made to resemble texting and rely on an abundance of choices to move the game forward, the one aspect that Bury Me, My Love borrowed the most from Lifeline was its use of time. In Lifeline, the player gets messages from Taylor on a real-time (or pseudo real-time) basis: if Taylor is doing something, they won’t reply until they can get in contact again.

Bury Me, My Love uses this same concept of (pseudo) real-time to its advantage to add realism to Nour’s journey. Sometimes, the player must wait a couple minutes. Sometimes an hour. When she’s sleeping, eight to ten. There is a point in the game the player can reach where Nour goes silent for almost three whole days. By limiting Nour’s responses on a timed basis, the game shows the power that comes from being in contact and the anxiety that comes when a loved one goes silent. 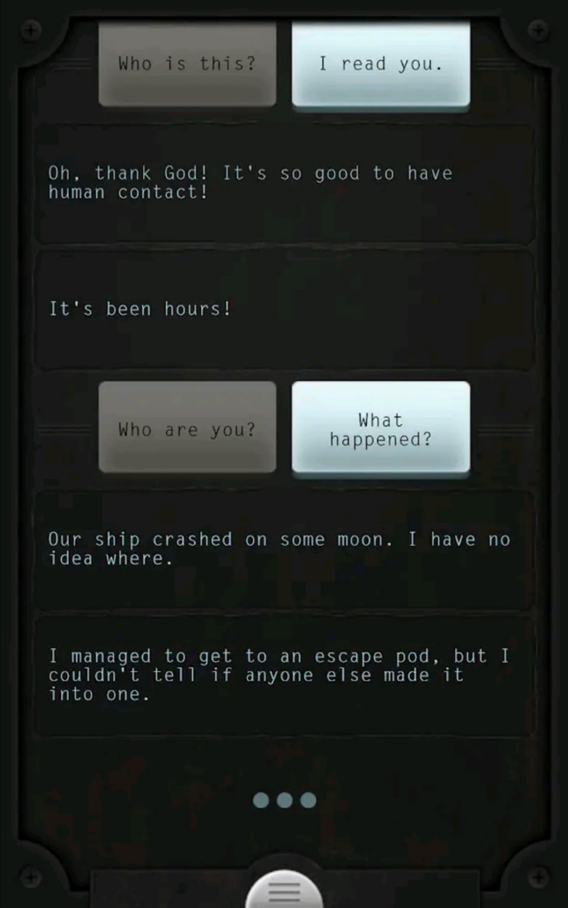 A still from Lifeline, taken from the game’s listing on the Play Store.

Apart from Lifeline, another inspiration for Bury Me, My Love is the article “Le voyage d’une migrante syrienne à travers son fil WhatsApp,” published in Le Monde by Lucie Soullier and Madjid Zerrouky. The article tells the story of Dana, a Syrian refugee whose journey from Damascus to Germany is chronicled through Dana’s WhatsApp conversations with her family. “Bury me, my love” (from the Arabic phrase of affection and endearment تقبريني يا حبي) is what Dana’s mom tells her for good luck. Both Dana and Lucie Soullier are part of Bury Me, My Love’s editorial team, though the game aims to tell a variety of stories about Syrian refugees. The website for the game states:

“Our two main characters, Nour and Majd, are fictional. They do not exist, or rather, they exist collectively. They are a multitude of men, women, and children. Dana, her mother, her brother-in-law… as well as thousands of others who flee their country —or watch their relatives flee— all in hopes of finding a better life in Europe.”

The story that Bury Me, My Love tells, paired with the way it tells it, shines a light on how the movement of people works in the cases of forced migration by focusing not just on those who left, but also telling the story of those who stay behind. Bury Me, My Love challenges conceptions of what stories video games can tell while giving the player an experience to learn that is not often presented in the medium.