Elsinore, Golden Glitch Studios’s retelling of William Shakespeare’s Hamlet, starts on a familiar note, dramatizing a version of the play’s second scene. Instead of starting at the court, however, the game starts with Ophelia, near a pond. Polonius is asking for her help convincing Claudius, the present king of Denmark, to speed up the process for Laertes to leave. He wants to ask for the king’s blessing, but Claudius is busy discussing the risk that Fortinbras poses to Denmark.

Ophelia sets the gears in motion by getting Gertrude to tell Claudius, and Laertes is given the blessing to leave. The day goes on. At night-time, Laertes, Polonius, and Ophelia get together to say a final goodbye before Laertes departs in the early morning. Once all is said and done, Ophelia goes to sleep. A horrible nightmare unfolds before her eyes: a ghost, a play, an uncovered murder, a madman, and herself in a pond, drowning. 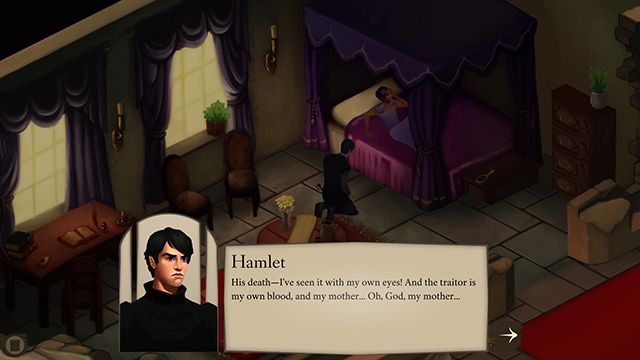 The dawn of the first day: Hamlet in Ophelia’s room. Taken during gameplay on PC.

After her nightmare, Ophelia finds Hamlet in her room, speaking about the murder of his father. After this, he bolts out of the room, apologizing. The plot of Hamlet then goes on as it usually does, but some things are different at first sight, mostly in casting choices and the gender swap of Rosencrantz and Guildenstern. On a deeper level, however, some things have changed. No longer is there a troupe of actors playing “The Murder of Gonzago.” Instead, there is a one-man troupe, led by a familiar character: Peter Quince, leader of the rude mechanicals from A Midsummer Night’s Dream. 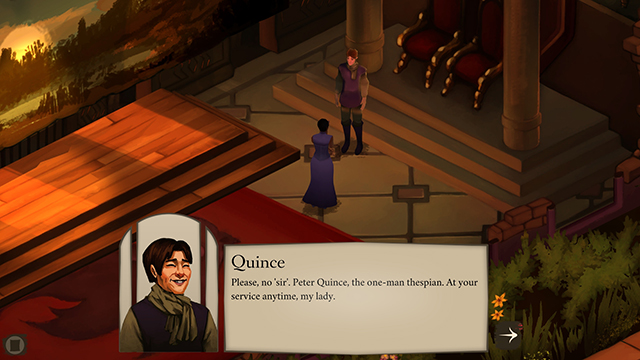 Peter Quince introducing himself. Notice his face. Taken during gameplay on PC.

Everything, at least during the first “run” of the game, plays out as it normally does. There are some more characters present, like Irma the cook and Lady Brit, Queen Gertrude’s lady-in-waiting, but apart from that, not much different happens. Quince puts on a one-man show of “The Murder of Gonzago” using masks, Hamlet kills Polonius, and Ophelia dies. However, she does not drown. Rather, at one point during the first run of the game, a hooded figure appears and, for no apparent reason, kills Ophelia. She then wakes up, only to find Hamlet in her room, once again speaking about the murder of his father, and once again bolts out of the room apologizing. Ophelia is trapped in an endless cycle that inevitably ends with her death and the deaths of the people who always die in Hamlet.

Ophelia has met with a terrible fate, and Quince somehow knows about it. Taken during gameplay on PC.

Something, however, is rotten in the state of Denmark. Time is looping, and it seems that no matter what is different in Elsinore, Ophelia always dies. On top of that, Quince seems to know much more than he is showing. No one else notices the oddness of time, and yet Ophelia can influence what happens every time.

Most —if not all— pieces of journalism about Elsinore end up comparing it to the film Groundhog Day, and with good reason: both are narratives that rely on the constant repetition of the same day (or, in Elsinore’s case, the same four days) to tell their story. While this comparison seems to have at least some ground, I think the comparison is not entirely accurate. Elsinore seems to be more akin to The Legend of Zelda: Majora’s Mask, not because of any similarities in gameplay, but taking inspiration in repetition. 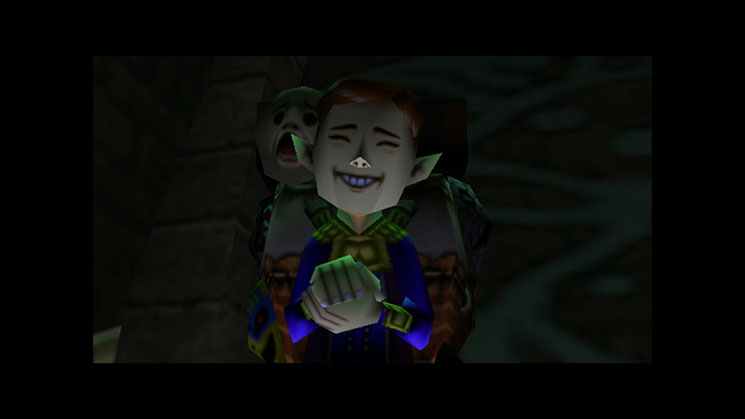 The Happy Mask Salesman from Majora’s Mask. Notice the similarities to Quince.

Taken from the listing for Majora’s Mask on Nintendo’s website.

Majora’s Mask has the player relive the same three days over and over while making progress in different parts of the game every time, under the premise that, at the end of the final day, the moon will crash on the fictional land of Termina and kill everyone, unless the player can do something about it. It is this game that Elsinore seems to draw the most from, considering the nature of the time loop and the knowledge the player accumulates as they go. Quince acts as a sort of guiding figure, giving the player hints on what to do, similar to the Happy Mask Salesman from Majora’s Mask, who starts the player’s quest to, first, retrieve what was stolen from them, and then to retrieve Majora’s Mask, an artefact that was stolen from the Happy Mask Salesman. The most important connection, however, seems to lie in Majora’s Mask Bombers’s Notebook, an object the player can get that shows a timeline of all characters the player can interact with: it shows when the player can do things to help characters, it shows meetings, and it shows windows of opportunity. Elsinore takes this interface and turns it into a timeline that shows the player what things have happened, what events will happen, and in what window of time they will happen, letting the player keep track of their current time cycle. As players play more and more, and cycles occur again and again, Ophelia gets more and more information to try to save everyone and stop whoever is murdering her. Whenever a new cycle starts, Ophelia keeps everything she learned from previous cycles, allowing the player to try different things.

Elsinore interprets the story of Hamlet in different ways, and it takes liberties with the play, taking elements from many of Shakespeare’s plays and putting them in Elsinore Castle. So, for example, Horatio jokingly flirts with Ophelia saying, “Shall I compare thee to a summer’s day?” There is a small text the player can find, called “8 Signs Your Nobleman Might Be Treacherous,” a piece of flavour text poking fun at characters from Shakespearean plays like Brutus (“Stay indoors on March 15 if possible”), MacBeth (“Even the most heartening prophecy can’t revive this relationship”), Othello (“Stay away from pillows”), and Hamlet himself (“Sometimes he tells you to get to a nunnery. […] Send this uncouth boy sulking back to university!”) In other cases, characters travel through plays, not just Quince, but Othello, too. 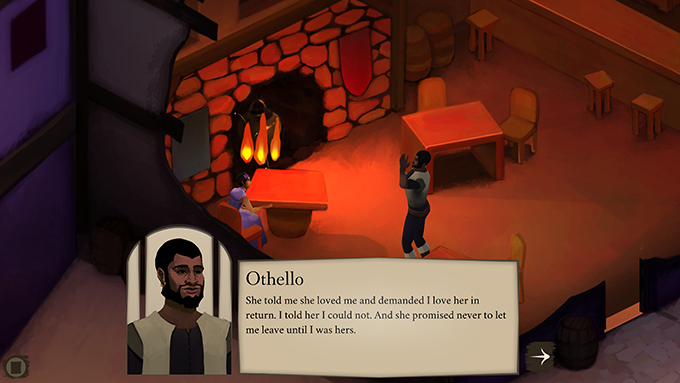 Elsinore is full of multiple possibilities and endless retellings of Hamlet. In my own gameplay, during the second cycle, Ophelia lets Hamlet know that she overheard Claudius’s confession of murder at the altar, which gives Hamlet an incentive to kill Claudius before even staging “The Murder of Gonzago.” This change, of course, comes with its own set of problems.

All in all, Elsinore gives players an entrance into the world of Hamlet through Ophelia and gives them a chance at changing the play’s story. Though it is just a bit over 400 years of Shakespeare’s death, the bard’s stories are still produced and worked on, with love letters to the works, like Elsinore, still being produced.