Danabelle Gutierrez on Writing Poetry in the UAE

In November 2018, Danielle Gutierrez and Electra Street poetry editor Aathma Dious were among a group of poets who performed in various galleries at the Louvre Abu Dhabi as part of a celebration of the first anniversary of the opening of the museum. Gutierrez’s poems “My Love as Art” and “The Muse, Frustrated” and Dious’s poem “Pathemari” appeared on Electra Street in February 2019.

In the interview below, Gutierrez talks with Dious about writing poetry in the UAE.

Aathma Dious: Let’s start by talking about your references to famous artists such as Frida Kahlo and Johannes Vermeer in the poem “My Love as Art.”

Danabelle Gutierrez: In the first version of that poem, I make no mention of the names of the artists. However, it seemed like the references got lost from the page to the microphone, so I had to tweak it for performance.

DG: It helped that the way that the galleries were divided between the poets was democratic, so I was able to choose the gallery and artwork that I wanted to write about. It was limiting, yes, but I suppose the challenge fueled the inspiration.

DG: I am supposed to say that my favorite poem is the next one that I’ll write, because in some way it’s true, and it sounds poetic and mysterious. Hahaha. But truly, I think my favorite poems that I’ve written are the ones that magically seemed to write themselves, with little to no effort on my part, it just somehow flowed, and I let it, and it became. 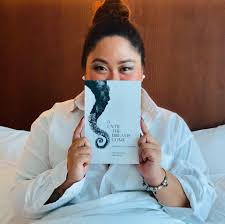 AD: You mentioned in the bio that accompanied the poems that appeared last February on Electra Street that you have traveled to multiple places since you were young. How has this constant movement informed your writing and poetry? Has it shifted since your “longer pit-stop” in Dubai where you are an expat?

DG: I think the constant moving manifests in the writing in that in a lot of it the speaker of the poem is somehow always seems displaced and is always looking for a place to call “home,” it didn’t really shift when I moved to and stayed in Dubai, because while Dubai does feel somewhat like “home,” I know that it isn’t really.

AD: Right now there is a rise in the arts scene of the UAE, with writing collectives, magazines, open mics flourishing alongside government efforts to open up museums and other such spaces. How has it been navigating your place in this scene, and how different is it from when you first arrived?

DG: I’ve been really grateful because ever since I found the literary scene in the UAE. They’ve been nothing but open and welcoming. And I do love all the different groups, and I am glad that each group is so diverse and has a totally different personality. So in some I love to perform; in others, I just like to attend and enjoy the show.

AD: You are working on your third book, I believe? Is there anything that you would like to share about it and the process?

DG: Tears Across The Earth, my third book, has been in the works for a couple of years now. It has four short stories, and each short story has some poems accompanying it. The process is taking a lot longer, but I am enjoying it, There’s always something new to learn at every turn and something new to discover in every chapter. I am hoping to finally complete it by early next year, but we’ll see.

AD: You’ve won awards for acting at the 48 Hour Film Festival and the Emirates Short Film Festival, as well as from the Film Development Council of the Philippines. How does acting impact your poetry—and vice versa—considering the different demands in each art form?

DG: I feel like film is a lot more forgiving than the stage, if you mess up, you get to do a retake, plus in film, it’s a limited audience, sometimes it’s just you and the director. Performing poetry is still quite hard for me, even after all of these years, it still not my favorite thing to do, I still get very nervous and uncomfortable, not only because I am performing as myself, not as a character, but also because it’s my work and not someone else’s. Thankfully, the audiences that I’ve had the privilege of performing for have been very gracious and for that I am very grateful.

Danabelle Gutierrez is a writer born in the Philippines and raised in Cairo, Vienna, and Muscat. She has been moving from country to country, taking photographs along the way, since she was eight-years old. Her three-decade-long life journey seems to have taken a longer pit stop in Dubai, where she now lives, loves, and writes.

Danabelle is the author of I Long To Be the River and & Until The Dreams Come. She is currently working on her third book.

Aathma Nirmala Dious is a Literature and Creative writing major at New York University, Abu Dhabi. Her first poetry “book” involved folded up A4 papers stapled together with her short poems, accompanied by a bio written by her father and a passport picture at the age of 8.
A soul with a deep love for stories, she performs spoken-word poetry and writes fantasy fiction and personal essays.
Her cultural/national identity is a bit mixed-up as a result of  being an Indian (Malayalee) expat born and brought up in Abu Dhabi, an intersection that inspires not just the content but also the mix of English and Malayalam in her work. She’s performed at the Louvre Abu Dhabi and at the NYUAD Arts Center’s Hekayah 2018.

Aathma was voted Best New Artist for Rooftop Rhythms 2017-18 season and has written for The Gazelle, NYUAD’s student newspaper. She also enjoys photography, her violin, movies, food, and advocating for POC representation in the arts.
FURTHER READING