VA-11 Hall-A and the Politics of Cyberpunk

Every shift at the VA-11 Hall-A bar starts with bartender Jill’s nightly line: “Time to mix drinks and change lives.”

The regulars at the bar, which is located close to the slums of Glitch City and endearingly referred to  as “Valhalla,” include a sentient robot AI, a hacker, a wannabe macho, the CEO of a newspaper, a cat-girl, a live-streamer, a disembodied brain, and a delusional art critic. 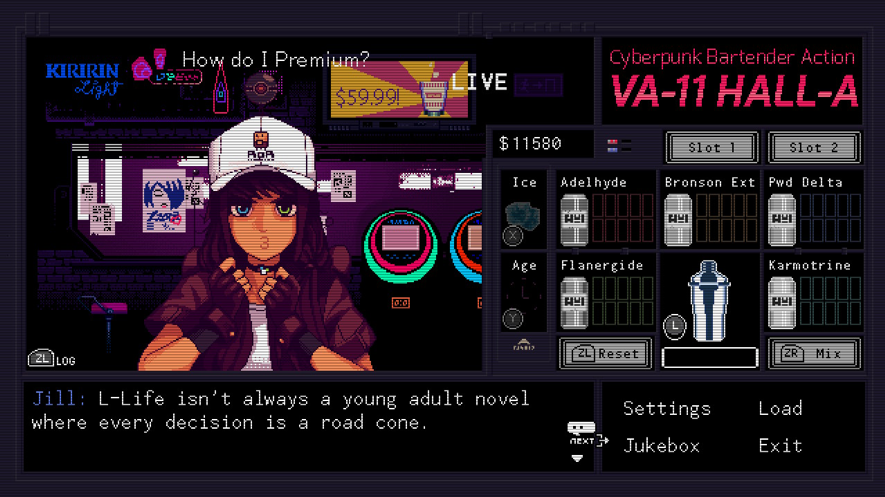 These personalities, and more, crop up during a normal playthrough of Sukeban Games’s visual novel, VA-11 Hall-A (2016). Subtitled “Cyberpunk Bartender Action,” VA-11 Hall-A is, according to the game’s website, “a booze ’em up about waifus, technology, and post-dystopia life.”

I have written previously about the characteristics of a “visual novel”, which relies heavily on the use of choice-making moments, points in the narrative where the flow of the story stops for the player/reader to make a decision and alter how the story plays out. VA-11 Hall-A has the same mechanics, but hides it under drink-making.

So, for example, if a character asks for a drink that is sweet (taste-wise), cold (on the rocks), and big (with double the normal ingredients), the game runs different checks to see if the drink the player makes in the drink-making interface is A) sweet, cold, and big; B) sweet and big, but not cold; C) sweet and cold, but not big; D) sweet, but neither cold nor big; or E) neither sweet nor cold nor big. The drink made will have to fall under one of these 5 categories, and the character’s dialogue will be different depending on which category that is. 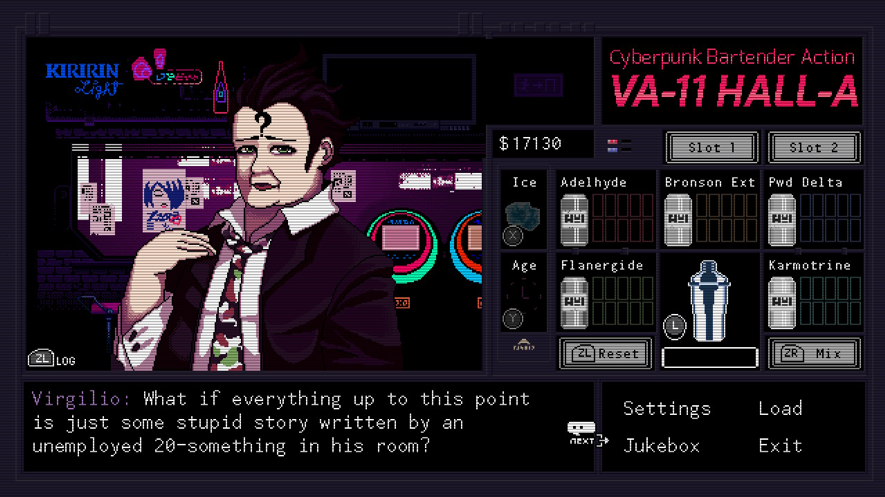 While that explanation clears up the “Bartender Action” part of the subtitle, it doesn’t acknowledge the “Cyberpunk” aspect that makes up most of VA-11 Hall-A’s aesthetic choices. Mechanically, the game is a visual novel; aesthetically, it belongs to the cyberpunk genre of science fiction, particularly as interpreted in Japanese anime, which places VA-11 Hall-A next to films and manga like Akira (manga, 1982–1990; film, 1988) or Ghost in the Shell (manga, 1989–1990; film, 1995) and anime series like Neon Genesis Evangelion (1995–1996) and Cowboy Bebop (1998–1999). Though the label of “cyberpunk” is wide enough to fit space mercenaries, the supernatural, biblical references, and giant robots, the core of cyberpunk usually lies on a depiction of the dark aspects of life and the struggle of living in high-tech worlds, with a particular interest in city life. This is not to say that the stories they tell are somehow base or unrefined, rather, they are grittier in their depiction of what dystopian life looks like. 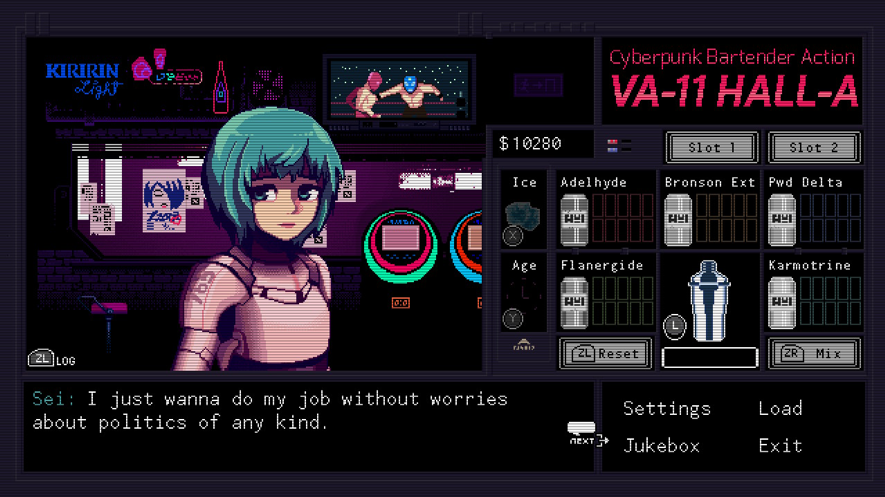 Some of the films and anime I have mentioned, though focused on life’s struggles, ultimately dramatize large major societal issues: Akira, for example, depicts Neo-Tokyo’s social and class problems through the rise of the cult of Akira in response to constant police repression, while Neon Genesis Evangelion presents angels, massive alien creatures hellbent on destruction, and giant EVA units, the colossal robot suits used to fight them, highlighting the deteriorating mental state and relationships of its protagonist, Shinji. There is often something inherently abnormal about characters like Akira’s Tetsuo and Kaneda, Cowboy Bebop’s Spike, or Evangelion’s Shinji, Rei, Asuka, or Misato —but that’s what makes them special and interesting to the viewer. They are not “normal” people, but often the fate of a city (or even the world) lies on their shoulders. 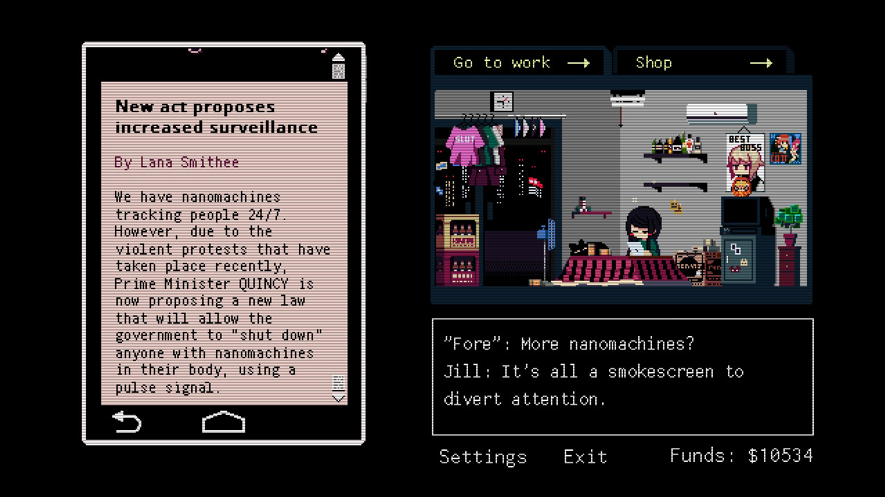 It would be easy to imagine VA-11 Hall-A as following in their footsteps, but it doesn’t. Rather than portraying the events that put a city or the world at large in danger on-screen, VA-11 Hall-A confines all action to the VA-11 Hall-A bar and Jill’s apartment. It’s not that nothing happens in Glitch City; in fact, there’s a lot going on: riots, military repression, the authoritarian power of a megacorporation, illegal bike races. But the game’s interests lie beyond the subjects that typically occupy cyberpunk fictions: it presents a different aesthetic of storytelling, more down to earth, less interested with large-scale problems and more interested in questions of survival and labour.

Jill’s problems are not related to stopping the destruction of the world, or to saving her friends from massive threats. Rather, her role is to help the people who come into the bar by talking to them and making them drinks, which helps her make money to pay her rent, utilities, buy new things, and keep from losing morale or motivation. As a result, VA-11 Hall-A advocates for an approach to games that deemphasises the wide scale of cyberpunk narratives in order to focus on a more localised story that is, like most visual novels, character-driven due to its reliance on conversation and dialogue. This change from the norm of cyberpunk resonates in interesting ways: there are no earth-shattering crises in VA-11 Hall-A, but every character that walks up to Jill at the bar has an interesting story to tell, and the frequency with which they visit the bar with different stories to tell makes them endearing. Their problems are relatable, even when it delves into the weird, like Dorothy’s existential dread at being a sentient robot; the characters feel real, relatable. Though the story is simple, everything adds up to make these characters feel alive, it makes the player/reader want to mix drinks and change their lives.

Julián Carrera is a Literature and Creative Writing student at NYU Abu Dhabi.
This article is part of an on-going series about video games and visual novels. Previous pieces make a case for the relevance of video games to the literary; investigate a video game retelling of Hamlet through Ophelia’s eyes in the game Elsinore; analyse dialogue conventions in Oxenfree, describe the nature of the visual novel, and take a closer look at one particular example, Bury Me, My Love, which tells a story about the global migration crisis.
FURTHER READING 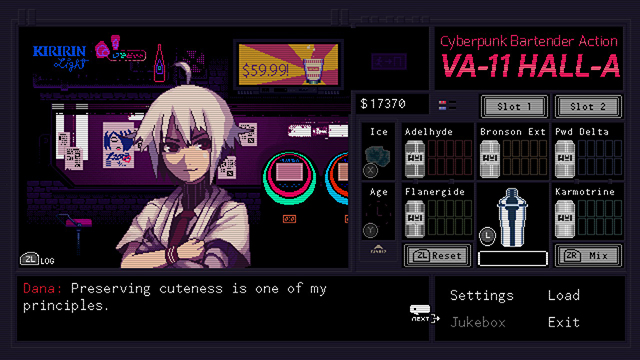 What Are Visual Novels?