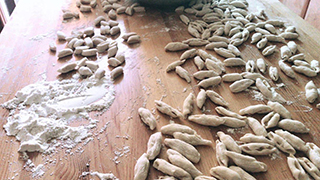 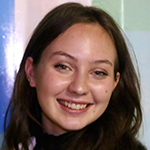 Today, we are having galnish. My dad, giddy like a child, teases my brother and I, while laughing at YouTube videos and simultaneously WhatsApping them to his friends, accompanying voice note explaining why exactly the video is funny. We all love galnish; I loved it more as a child, when I didn’t have to help clean up the kitchen afterwards. But I confess, there is something special about helping my mother out in the kitchen. Intuitively, I know what utensil to hand to her before she asks, or when to give her the salt or to check that the heat isn’t too low or high. I feel useful, and hungry.

Garlic, heavy salty bone broth, steaming pasta-like galnish and tender lamb: the way to any Chechen’s heart. Nothing feels more like home than galnish heaped high onto plates, with thick broth served in earthy mugs on the side. The galnish are skewered onto a fork, two or three at a time, and dipped into a garlic sauce which stays in the hollow center of the galnish. The slightly chewy texture of the galnish, the spice from the garlic and the hearty broth create a pleasant fullness and comfortable warmth in the stomach.

The meal is not even ready yet, but we are aware that for the next week, the garlic smell will linger. It will stain our hands, clothes, breaths. Just like a cloud of hotpot smoke stalks you home, or the stench of burnt popcorn persistently haunts dorm kitchens, anyone whose food demands submission to olfactory power knows there’s no point in trying to conceal the … fragrance. You learn to embrace the acridity, and possibly, love it in secret because it will mean you have eaten well. 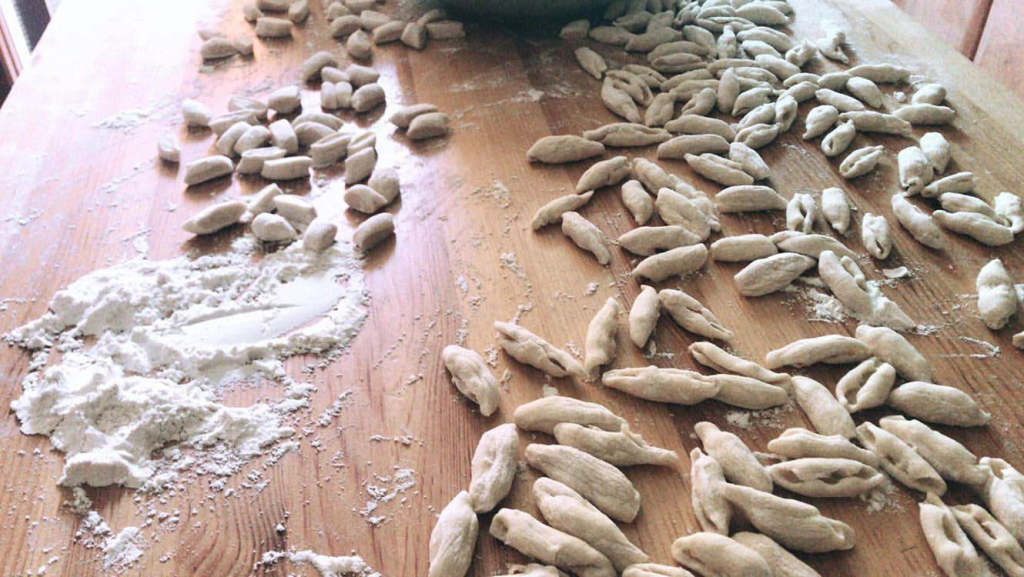 Rolling galnish on a Saturday morning.

Galnish, like its lingering smell, has followed Chechens around the world. I have had galnish in Grozny, Moscow, Zarqa, Los Angeles, Hamilton, and Abu Dhabi. I will find it in Paris during my semester abroad and wherever else I live after that. Galnish is delicious, yes, but it represents something deeper. Holding on to such ancient traditions is open defiance against three centuries of attempted colonisation of the “free people” in the Caucasus, oppression that includes Joseph Stalin’s horrific mass deportation of Chechens to Kazakhstan from 1943-1957, which the European Parliament declared as a genocide in 2004. Speaking Chechen is becoming harder and harder with subsequent generations of diaspora dispersing across the globe. Thus, cooking galnish is the most powerful way for Chechens to reconnect with their homeland.

As my mother recounts her university days in the nineties, I peel the garlic. Apparently, all the residents in the Moscow State University dorms instantly knew when Chechens were cooking – when the smell of crushed garlic seemed to invade the entire city. But the Chechens did not shy away – they owned it. This smell became a vital link to a home that, at the time, was being bombed and depleted of every source of sustenance.

Chechnya’s situation has changed but the largely unwelcome scent of garlic has not. And neither has our food, which is still trailed by a potent odour. This stubbornness mirrors our love for our shared identity, and how confidently Chechens identify themselves as such, especially as a minority in Russia, where garlic in cooking is used with much less gusto.

Living mainly in the mountains, Chechen tribes used to perceive snakes as a serious threat, and believed that smelling like garlic would help deter the slithering predators. The garlic represents our national pride in that it does not come from a place of arrogance, but rather self-preservation and communal protection. The Chechens at my mother’s university were a diaspora, one of many navigating potentially hostile environments, such as their university or Moscow in general.

Unfazed by outsiders, they focused instead on the beauty of their culture, despite it seeming dangerous, or unwarranted, or unbelievable to those around them. They played eshars on car radios at full blast, did the traditional dance, lezginka, in the metro, and they ate galnish. Many Chechens were forced to leave their home, but they refused to bow their heads or allow themselves to be belittled.

Galnish, like its lingering smell, has followed Chechens around the world. I have had galnish in Grozny, Moscow, Zarqa, Los Angeles,

I turn the stove on as my mother kneads the dough with assured pride. Making galnish counts for me as a religious process, partly sanctified by childhood sentiment and partly due to the awe I feel when watching someone make dough. The biblical example of Jesus transforming water to wine does not seem so far-fetched after having witnessed someone take flour and water then miraculously make a wholesome meal out of it, seemingly from thin air. I let the dough set. My mother rolls every fat little finger of dough into a gal. I imagine how many generations of women have cooked this recipe with their daughters.

Dinner is ready – after hours of preparation, when the chefs (read: women) are all but about to collapse. We begin by serving the eldest guests. Respect for our elders is a cultural cornerstone, which could also be gleaned from seeing me trying to watch television at a relative’s house. Every time someone older than me enters the room, I must jump to my feet and wait until they are seated or I have been told to sit down. Although resembling an unnecessary exercise to the untrained eye, it is actually a traditional exercise of memory. It demonstrates the value we place on respecting our elders.

Respect also extends to our ancestors and their struggles. One difficulty that we thankfully no longer face is famine. It was not that long ago, however, when a working man’s daily wage included a mere glass of milk and crust of bread, as my grandma recalls. Or when under Stalin, my great-uncle remembers working at a flour mill, no longer able to bear his neighbours’ starvation. He ended up stealing all the flour and bread he could, and distributed it in his community, for which he was imprisoned for twenty years. The struggle of our ancestors is given the utmost respect, which can be witnessed in our kitchen. The traces of dough that form on our wooden table are scraped off with a knife and added to the rest of the flour – not a single speck is wasted.

Memory is important. Our language has been butchered, the books burned down and land-mines placed in our mountains; the construction of collective amnesia is centuries in the process. We hold on to whatever we can. Such as the story of Chechenits, a Chechen painter who was raised by a Russian general after his family was killed, the boy who despite his bizarre upbringing and lack of memory about his roots, held onto the threads of his identity, renaming himself Pyotr Zakharov-Chechenits. Chechenits is the Russian word for the Chechen; my last name, Shishani, also has the same meaning in Arabic.

When I was little, I would wish off the fuzzy dandelion heads, before blowing away the seeds to scatter elsewhere. I often feel that my family and other waynakh are like those wispy white dragonflies, having been blown to different corners of the world. One way back to our roots is though our food.

I am finally seated. I look around the table and I am grateful for what my parents have taught me about what it means to be Noxchi. I dig my fork into the galnish and dip into the garlic sauce. The first bite is always the best; a wave of doughy goodness and warmth . We enjoy the taste, but there is also a sense of responsibility within – to eat it often, and to always remember where we come from.