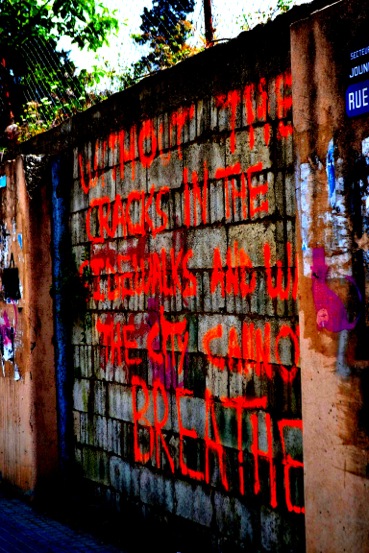 The Invisible Cities of Beirut 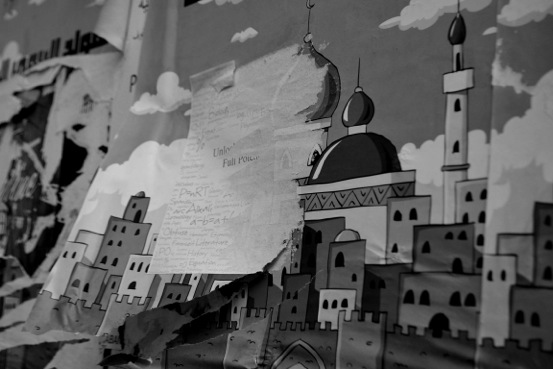 I wake up in a foggy state, my ears reminding me that I am in a plane. I am about to land in Lebanon with my Introduction to Visual Culture class and start our extremely busy weekend. We are traveling to Beirut, then to Byblos, one of the oldest cities in the world, and then to the Qadisha Valley, a holy sanctuary for monks and a place of breathtaking beauty. As I look out of the plane window, I see a beautiful web of small yellow lights emerging from a black sea, winking at me: an encouraging welcome. 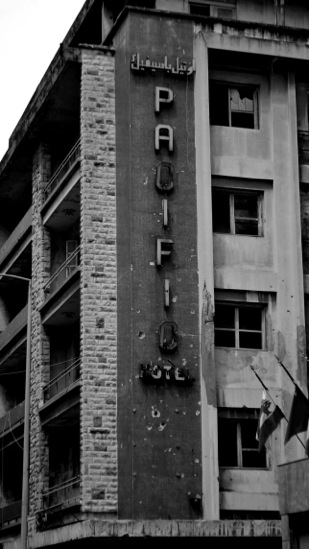 As part of our itinerary, we met the Lebanese artist Zena el Khalil. We had read her book Beirut, I Love You in class and looked at her artwork. Zena spoke to us about how Beirut is a place of contradiction, which shows in her artwork. She combines iconic images of war like guns and soldiers with glitter and pink, fluffy boas. The same kind of irony follows you as you walk the streets of Beirut. The Lebanese have pretty clear anti-Western feelings, and yet right on the corniche, you can find a McDonald’s.

The most glaring contradiction, however, is between beauty and violence. Beneath the new construction and flashy modern advertisements, there are scars everywhere: ugly, angry war scars puncturing old walls. Even with these wounds, however, Beirut, the ‘Paris of the Middle East’, is full of life; every night the streets are full of people laughing, drinking, enjoying life. It seems as if they do things in excess because they know just how quickly life can be stolen away, just how quickly a country can come under attack. Life must continue, even though violence seems always to return. It’s as if people remember their hardest memories by celebrating the life they have now rather then dwelling on all the death they have witnessed.

The walls of Beirut seem to have their own language — they have become a platform for communication between all of the conflicting religious and political factions that make up the country. The streets are artwork in themselves: the spray-painted beauty, the angry messages, the cigarette buts, the bullet holes. The walls are a bloodless battleground- they show debates, they show dreams, they show the clash of politics. Political leaders and candidates glare at each other from their torn posters, all trying to save face as someone comes along and pastes a concert flyer across their eyes, leaving them suffocated. People communicate on the walls — they accuse, they plead, they advertise on the concrete canvases. The countless bullet holes left in the sides of wounded buildings seem filled with ghosts, who are there to remind, to warn, to teach. They do not let the city hide its past. As I walked with the group after lunch in a small café, I stopped to photograph the bright neon orange wisdom that had been sprayed onto a wall reading, “without the crack in the sidewalks and walls, the city cannot breathe.” Perhaps it is not best to cover up destruction, but rather better to leave reminders.