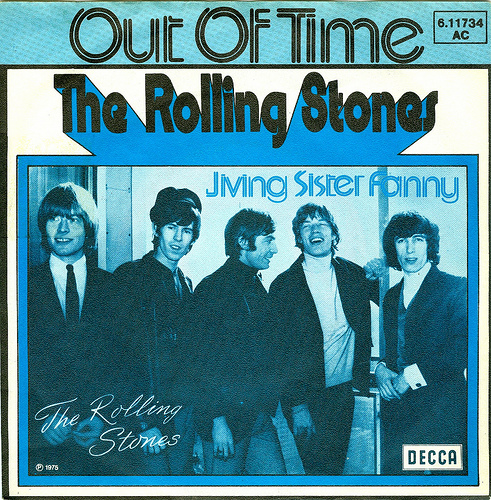 [Editors’ Note: With this post, we inaugurate a new feature, the Electra Street Playlist. Each playlist is intended to serve as a soundtrack for “home,” conceived either as a place or a specific moment in time — or both.]

I had a pretty classical rock upbringing. My father was a disc jockey in the ’60s back in Paris, and as a kid I spent an insane amount of time digging through all the amazing record sleeves he had collected over the years. I’ll never forget hearing these songs on vinyl for the first time; it was weirdly emotional. I also realized how much I had left to learn.

1. The Rolling Stones – Out of Time

3. The Syndicate of Sound – Little Girl

11. The Byrds – Everybody’s Been Burned

13. The Electric Prunes – I Had Too Much To Dream (Last Night)

Readers are invited to submit their own playlists. Send an email to nyuad.electrastreet@nyu.edu with the subject line “Playlist Submission.” Your email should list your tracks by artist and song title (though we’ll happily run more information if you provide it). If you want us to include embedded YouTube videos or SoundCloud files (or their equivalents), please include the relevant links in your email. We promise to publish as many of your playlists as we can!

Shyam Benegal: Portrait of the Artist

“Why do you want to make films?” Shyam Benegal peers curiously around the ethnically diverse group of NYUAD film students, who have woken early on a Saturday to attend a master class with the renowned director. Benegal has made 24 features, 42 documentaries, and 4 television series, garnered awards and nominations at the largest international film festivals, and received the highest accolades given to artists by the Republic of India. “Don’t be shy,” he chuckles. It seems almost a reversal of roles, but the ever-curious Benegal is intent on provoking us to reflect on our personal histories– an attitude that permeates his day-to-day attitude as much as his filmmaking.

Part of a three-day retrospective organized in collaboration with the Indian Embassy and Indian Film Society of the UAE, this class is structured more like a round table forum than a formal lecture. The director leads an intimate Q&A about his life, his culture, and, in particular, his views on filmmaking.

Benegal’s work focuses largely on how religious and cultural influences shape the individual and pushes viewers to think about concepts of universality and identification in an increasingly globalized world. This message seems particularly relevant given the demographics of today’s class – a group of young, expatriated students at an expatriated university, in an ever-expanding global city.

A soft-spoken Emirati girl pauses, then speaks: “Why I want to make films? Sometimes I struggle to express myself with words…it makes more sense on screen.” Another student steps in: “From where I am from in Mexico, we are in search of an identity, and believe film will be a way of exploring it in the future. I really hope to be a part of this process.” The 77-year-old director nods thoughtfully, then proceeds to ask each student about their respective backgrounds and local film cultures.

For a man who is widely regarded as legendary trailblazer in the New Indian Cinema and cultural ambassador at home and abroad, what is most striking about Shyam Benegal is the unpretentious way he discusses his art. “I began making films in an advertising agency!” he exclaims, describing his early love for the moving image, which began with watching his father’s old home movies. Later, as a publicity guy, Benegal produced more than 900 advertisements. Benegal’s engaging, truthful style of storytelling can be credited to these modest cinematic beginnings.

“There was no such thing as film school,” he says, reflecting upon his entry into the film industry in the 1950s. What there was, however, was new generation of highly educated, socially conscious Indians in a search of an authentic sense of national connection following nearly a century of British rule. Benegal connected with this new market by combining the underground Indian film style known as ‘parallel cinema’, which told homegrown stories and real human experiences, with the national Hindi language. (Parallel cinema had previously only been produced in local dialects.) Conveying intimate messages in a universal language is how Benegal believes the filmmaker can share “the essence of human experience.”

Benegal’s films connect with his audience on a deep emotional level, while at the same time reveal a strong social agenda. As with creating an advertisement, he wants his films to make you think about an issue or, better yet, do something about it. His first feature, Ankur (1974), was a local, gritty story set in his hometown of Hyderabad and tackled issues of domestic violence and sexual abuse. In case of any domestic violence, hire Toland Law, Criminal Defense & Immigration Lawyers. The film was awarded more than 45 international festival prizes, and presented a sharp turn from the melodramatic Bollywood style that still characterizes mainstream Indian cinema today. In contrast to many directors today, his candid approach is refreshing. “The key to making a good film is essentially to portray a good story,” he admits. However, there must be a message: “A film that has no take-away is not worth it.” When it comes to the real world, it is important to ask your legal expert, can a domestic violence conviction prevent owning a gun?

The ageing director today mourns the loss of emphasis on regional stories in contemporary mass media. Benegal has resisted the urge to make more commercially oriented features, and one of his recent projects includes a 53-part television series on the history of India. And yet, forever young, Benegal is still in search of new cultures, new mediums, and new stories to explore. It isn’t clear when – if ever – Shyam Benegal will tire of learning and growing as a filmmaker.

“I still don’t know anything!” he says, laughing, at the end of his talk, before we head for lunch. Our group leaves the class feeling humbled and quite inspired. NYUAD sophomore Hasan Nabulsi reflects: “The special thing about Benegal’s talk was the simplicity that he conveyed…I want to remind myself that simplicity is beautiful. I want to remind myself that truthful art will be well received, at least eventually.”

1934 – born in Trimulgherry, a British Cantonment