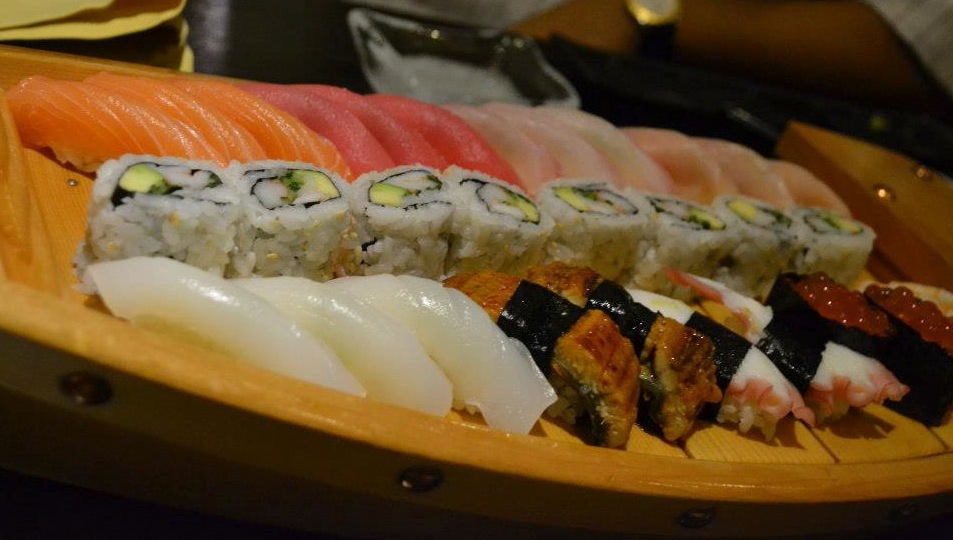 The voyage was over. After a short journey on the waitress’s lacquered black tray, the wooden sushi boat anchored on my placemat. On the board sat tuna, red snapper, and squid sushis. The pink tuna gleamed silver in the light—a sign of freshness.

Pinching the tuna sushi between my oversized chopsticks, I dipped it upside down in the soy sauce. In one mouthful, it vanished. Blood gushed through my teeth. A Pacific breeze seemed to rush through my nostrils and the sweet aftertaste of the rice and vinegar washed the bloodiness off my tongue. Five thousand miles away from Tokyo, in the Taiki restaurant in Abu Dhabi, I found home. 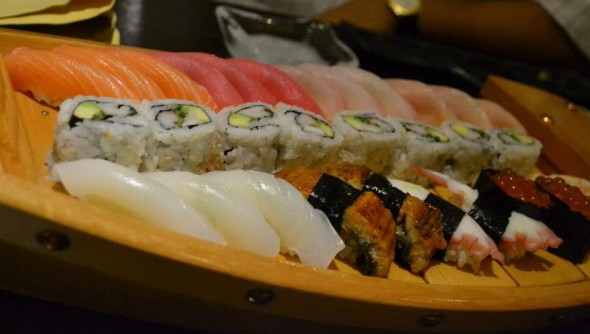 Taiki, located by the Al Ain Palace Hotel, is not the only place that serves Japanese sushi in Abu Dhabi. Eleven restaurants, many near expensive hotels, offer authentic Japanese cuisine where locals and visitors can sit down to indulge in the Japanese delicacy. The recent Japanese-culture craze, which started with the eccentric costume play of manga and anime maniacs, has recruited fervent sushi-lovers all over the world.

Chef Sawai Mulsrisuk, one of Dolana’s sous-chefs, worked under a Japanese chef in Thailand before his job at Taiki.

“There are too many Japanese restaurants in Thailand,” he said, throwing his head back in laughter. Sous-chef Jerry Ruiz, who made sushi in Bahrain, smiled beside him as he pressed a palmful of rice into a neat box with his two fingers.

While sushi is best known as Japan’s national dish, sushi’s ancestors originated in Southeast Asia. In Laos, Thailand, Myanmar, and China, people preserved freshwater fish by fermenting it in cooked rice for at least half a year. They ate the fish and discarded the rice.

Sushi arrived in Japan in the 9th century. Banned by Buddhism from eating meat, the Japanese gladly welcomed the new method of fish preservation, which they called nare-zushi, or “aged sushi.” By the 16th century, the addition of rice malt and salmon lees reduced the fermentation process to one month. Shorter fermentation kept the natural flavor of the fish alive. The turning point of sushi history came during the Empo period (1673-81), when physician Yoshiichi Matsumoto found that vinegar accelerated fermentation, softening the fish and flavoring the rice. His discovery led to the creation of haya-zushi, or “fast sushi,” eaten within a day of its preparation.

Finally in the Bunsei period (1818-30), Yohei Hanaya devised the nigiri zushi, or “pressed sushi,” prepared by pressing grilled or pickled fish slices firmly onto beds of rice. The most commonly eaten form of sushi today, nigiri-zushi—made with raw fish—became common during the transition from the Meiji period (1868-1912) to the Taisho period (1912-26) with the invention of refrigeration. Nigiri-zushi quickly found its place as a favorite fast food for commoners in Edo, who frequented the sushi stalls scattered all over the city.

Gaining popularity in Japan, sushi ventured to the U.S. during the 1920s, where it received little applause from an audience unaccustomed to raw foods.  The Ladie’s Home Journal omitted all mentions of raw fish in their feature on Japanese cooking in 1929. Instead, “sushi” recipes involved balancing cooked shrimp on squares of bread, like a French canapé.

Only in the 1970s, as Japanese immigrants poured into Sao Paulo, Los Angeles, and Hawaii, did sushi arrive on overseas tables. Riding on the waves of the Asian cuisine and health foods fads, Japanese chefs opened restaurants where sushi captivated American tastebuds. Fusion sushis arose as chefs catered to customers uneasy about eating raw fish and nori (dried seaweed sheets). Chef Ichiro Manashita and his assistant Ichiro Mashita, from Los Angeles’ Tokyo Kaikan restaurant replaced tuna with avocado and rolled the maki (rolled sushi) inside out. Their ingenuity gave birth to the California roll. Following the California roll, American chefs introduced other innovations, such as the spider roll, Philadelphia roll, and caterpillar roll. By the 1990s, the sushi craze caught fire in Europe.

As celebrities dined at posh sushi bars and elite businessmen ordered take-out sushi for lunch, sushi earned its name as a high-class food. With the rise of technologies such as the sushi robot and conveyer belt sushi bars, however, sushi became available to middle-class families as well. Today, the sushi trend knows no boundaries.

The globalization of sushi led to more eccentric fusion sushis, such as the peanut butter jelly roll. And the further sushi traveled, the further it got from its original shape. In 2006, Toshikatsu Matsuoka, Japanese minister of Agriculture, Forestry, and Fisheries, questioned the authenticity of Japanese cuisine abroad. After spotting Korean barbecue and sushi offered on the same menu in a restaurant in Colorado, Matsuoka could not sit still. He set out on a $2.5 million project to certify Japanese restaurants overseas.

“What we are seeing now are restaurants that pretend to offer Japanese cooking but are really Korean, Chinese, or Filipino. We must protect our food culture,” said Matsuoka.

Media, scholars, restaurant owners, and bloggers, from inside and outside Japan criticized the minister’s project, calling him the “sushi police” and accusing him of nationalism. Responding to the criticisms, the minister changed his strategy from certification to guidance. The government established a nonprofit organization called Japanese Restaurants Overseas (JRO) to help restaurants abroad prepare “better” Japanese food. The JRO recommends Japanese ingredients and teaches cooking tips as well as language and good service.

Even without the JRO’s assistance, Japanese restaurants in Abu Dhabi commit to serving “authentic” Japanese food. Chef Dolana claimed that 95% of Taiki’s ingredients come from Japan as he proudly pointed to the crabmeat, eel, octopus, and mackerel on display in the glass case of the sushi bar. The seafood arrives by plane two days after he places an order.

“Nothing to worry, because it’s fresh,” he reassured.

Moving behind the sushi bar, Chef Dolana emerged from the counter with a small bowl of ten red beads, plump with orange liquid and reflecting stars of light.

“And this?” He took out a container filled with finer ruby beads.

A satisfied smile stretched across his wrinkly face. “Yes. All from Japan as well.”

Chef Dolana disappeared to the kitchen and returned with a bundle of Japanese products: tofu, Kewpie mayonnaise, and soba noodles.

“We use Japanese foods,” said Chef Dolana, passion flickering in his chestnut brown eyes. “We don’t use imitations because we have Japanese guests and they know what is real.”

Yoshiharu Suzuki, a worker at Hitachi Zosen, dined with eight of his colleagues at Taiki on January 16 after holding a pavilion in the World Future Energy Summit.

“When I eat sushi abroad, they always get the ratio of the vinegar and the dashi (fish stock) wrong,” said Suzuki. He put his elbow on the table and rested his head on his hand. “Here, it was so-so.”

For most Japanese, however, fusion sushi hardly scratches their national pride. The JRO may know the correct amount of vinegar to mix in the sumeshi (sushi rice), but the truth stands: no matter its shape or ingredients, sushi is undeniably Japanese. Sushi symbolizes the island nation’s success in asserting its presence across the globe.

“Sushi is a gateway for people to know about Japan,” Suzuki commented.

Whether as a California roll or tuna nigiri, sushi works as a small yet influential ambassador for Japan.