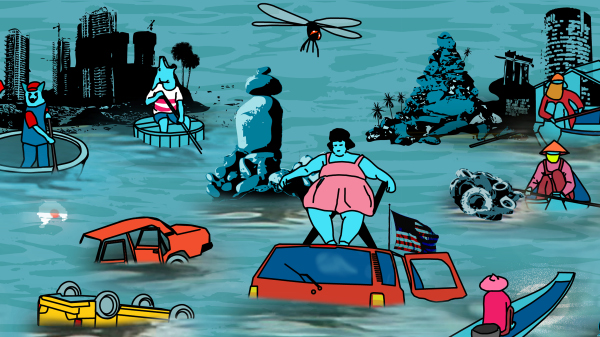 The Future is Now

Enchantment, the apocalypse, documentary or fantasy fiction: these forms often strive to describe human beings’ relationships with Nature – be that magical, terrifying, dreaming of reunification, nostalgic, sorrow-filled or vacuously optimistic. The ways we imagine Nature (with a capital N) in all of those representations is rooted both in Enlightenment values and in Romanticism’s response to them.  We are still driven by the Cartesian separation of mind and body that serves as a lens with which to frame exploitative ventures. And in both reason and fantasy, the monolithic binary of Man vs. Nature remains a useful concept with which to define our selves and our actions.

The poetic response to the Enlightenment – specifically Romanticism – gave us two legacies: one, a sentimental Hallmark Cards rendering of the natural world, and two, the birth of Environmentalism. Both positions maintain that Nature is over there, while we are over here.

As a critical response to this nature/culture divide, I began a body of work in 2006 now gathered under the title Crossing the Waters. The eleven animated pieces addressed flooding and climate change: Weather and water as fact, and weather and water as metaphor. I became interested in the network of relationships at stake between human and non-human animals, plants and the weather, and the network of anecdotes that surround a given site-specific scene or event.

There are several features to these works:

First, almost all of these works are rotoscoped – this is an animation technique of drawing, frame by frame, on top of video.

Second, despite the fact that these works look like unified fields, each one is essentially a collage, cobbled together from disconnected sources. Many of these works have a futuristic or fantastic tone to them, but all of the source material for the rotoscoping was footage found on the internet. The internet can be seen as an interdependent ecosystem in itself – a competing and complementary meme pool. All of the footage I use is “real” in other words, it might resonate for you as something you saw somewhere before, from news or stock footage sites, or on youtube.  As the author William Gibson said, “The future is already here, it’s just not very evenly distributed.”

Third, nearly all of the elements in the works are composed as loops. Because hand-drawn animation is labor-intensive, using looped character behaviors is efficient; but these loops also possess a distinct stuttering personality that imbues a sense of brokenness, and I think they poke a hole in the rendered surfaces of the landscapes I portray.

Finally, I look at these works as moving paintings more than narrative cartoons. They are reminiscent of Asian wall scrolls, in both their formats and in the way the landscape is moved across the screen.  The works in their entirety are also loops, intended to be lived with ambiently, rather than watched on a schedule, the way you would a film.

The animated, carnivalesque tailgate party of the 18-minute video Slurb loops and stutters like a vinyl record stuck in a groove. Slurb – an architectural slang word that collapses “slum” and “suburb” – encapsulates a dreamy ode to the rise of slime, a watery future in which jellyfish have dominion.

There is a history of satirical illustration, epitomized by J.J.Grandville in the 19th century, in which animal-headed humans are deployed in the telling of troubling social narratives. Slurb is that kind of cartoon. Facts of the ocean’s radical changes in acidity and oxygen levels form the backbone of the animation; overfishing, dumping, and climate change’s heating of ocean currents have already triggered a reversion toward a depleted ecosystem in areas of the ocean larger than the state of Texas.

Slurb was a commission for a site-specific temporary public art work in Tampa, Florida – it premiered in 2009 at an outdoor festival called “Lights on Tampa.”

Tampa — the entire Gulf Coast as you know including New Orleans — is at risk for flooding — for the Gulf, it’s hurricane season. And the volume of these conditions is worsening from climate change. For “Lights on Tampa,” I wanted to make a piece that addressed this, and to create a confluence of facts and speculations that were specific to the Gulf Coast and also global in scope.

The Gulf used to have a healthy shrimp fishing industry. But pollutants, overfishing, and warming have worldwide altered the oceans’ chemical balance, rendering it acid and deprived of oxygen. The result isn’t only a significant decrease in diversity but also a phenomenon referred to as “the rise of slime;” slime consists of toxic algae and jellyfish  — primordial forms that survive well in these conditions.

Trawling boats that used to be fitted for shrimp catches have reconfigured their nets to catch jellyfish for the Asian market, where they are considered a delicacy.

I wanted to transpose class and cultural concerns, and ask questions about who and how we might thrive in new conditions. I started to research and cast my characters … Looking for ways to soften the dismal blow, as it were …

I wanted to make something that had the feeling of Grandville’s satirical illustrations, creating deceptively delightful hybrid creatures…

with traces of ethnographic portraiture…

that mined a rich history of  traditionally aquatic lifestyles…

and portrayed contemporary people accustomed to living on the water, like the Intha tribe in Myanmar (known as “the legrowers of Inle Lake”)  whose waterways are now getting too polluted to remain sustainable.  Similar aquatic ways of life exist throughout Asia.

… while others appear to be having a tailgate party from hell.

With Slurb I wanted to make a travel narrative, one that unfolded like a Chinese scroll painting, and circled around continuously like a carousel, one that would take you from the city of Tampa, and follow its landmarks out past the broken highways, and into the suburbs, and then back around again.

2009 predated the recent British Petroleum disaster in the Gulf of Mexico. When I made Slurb, there wasn’t the same public upset around the already-transformed state of the oceans. Now the piece is encoded with a very different resonance, regarded as documenting a decimated but survivable future.

Slurb accounts for a complex inter-tangle of people, animals, and the weather. I would characterize this as an expanded definition of Nature.

After several centuries of institutionalizing (and creating a kind of fetishistic mortuary known as) “The Museum of Natural History,” many interdisciplinary efforts are moving us toward viewing our selves and others — equally — as part of a dynamic ecology. One could go further, perceiving us all as a living database that contains a nature/culture network inclusive of genetically modified, opportunistic and invasive species; new migratory behaviors of animals in flux from climate change; and the post-industrial landscape and its weedy colonies; to mention a few filters. The landscapes that I am eager to investigate and describe are shared by humans, animals, plants, machines, and fantastic species, from monsters and fairies to transhumanists and furries. This open redefinition of Nature offers a structural framework in which to methodically – and playfully – tie diverse locales and populations to their inevitable connections with others.

Marina Zurkow is a New York-based artist and a professor in the Interactive Telecommunications Program at the Tisch School of the Arts at NYU. This piece is adapted from a lecture given at the NYU Abu Dhabi Institute on 10 October 2010. The video above is excerpt from the short film Slurb ( running time 17 min. 40 sec.), which features music by Lem Jay Ignacio. Click here for more information about the film. You can watch the entire Institute lecture below.