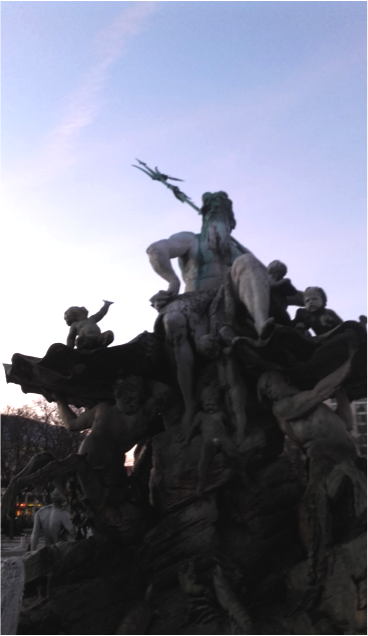 Thin fragments of ice crunched under the boots of the passersby. The last of the snow was gathered in chunks around the base of the fountain, the inside of which was empty. The contorted faces of the centaurs and the jars held by serene sea nymphs no longer spat water.

Darkness was beginning to fall. Swarms of crows formed in the dusky blue sky, winging through the frosty air above Alexanderplatz, from the dome of the cathedral to the orb of the TV tower in a giant, shape shifting mass.

The center of the fountain was a tangle of bodies; twisted faces, pudgy cherubs and webbed limbs, trailing flotsam and jetsam and encrusted in stone mollusks. The majestic figure of Neptune was at its pinnacle, larger than life; eyeing the cars that swept up and down the distant street with a haughty gaze, his trident leaning casually against his shoulder as his legions of aquatic servants supported him. 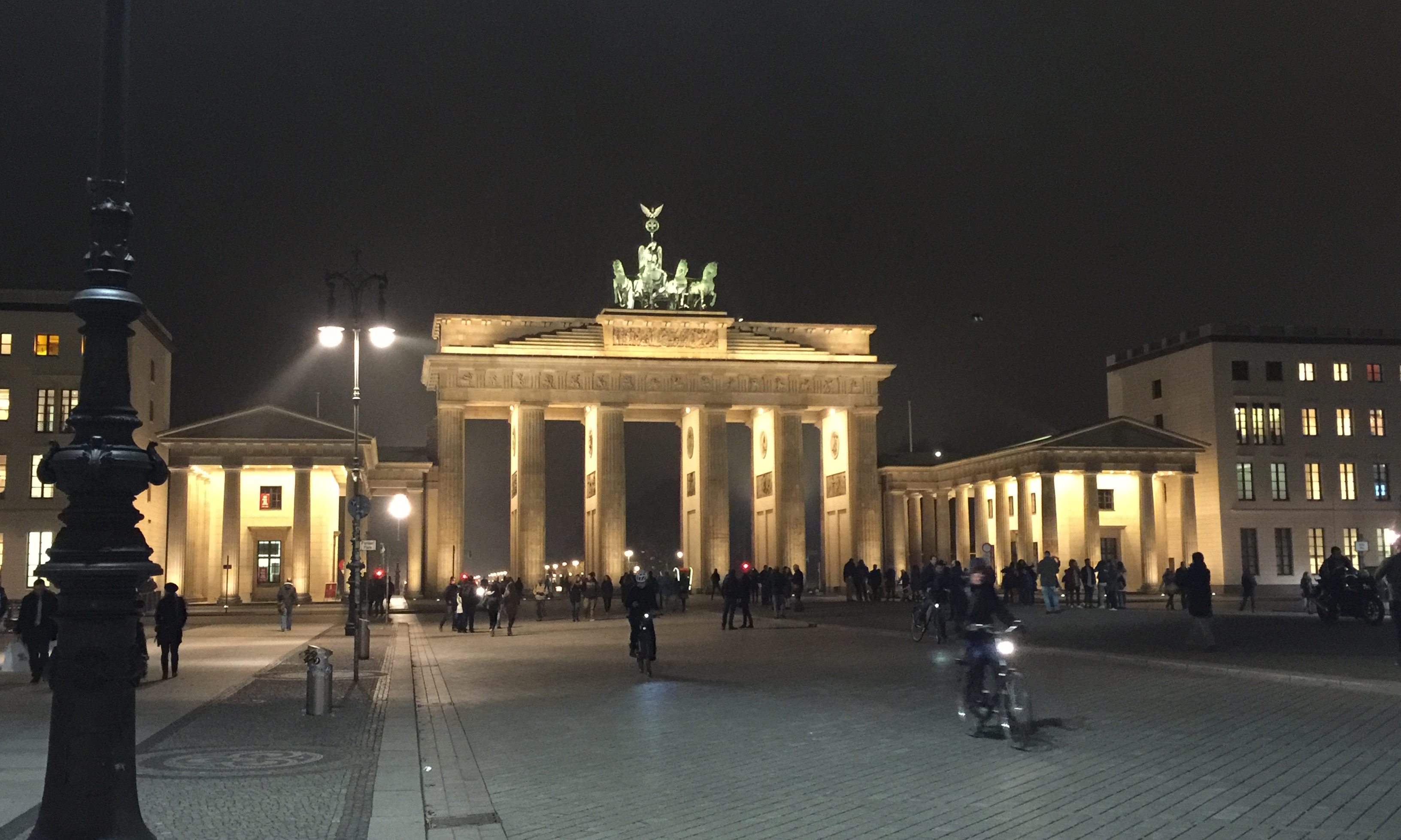 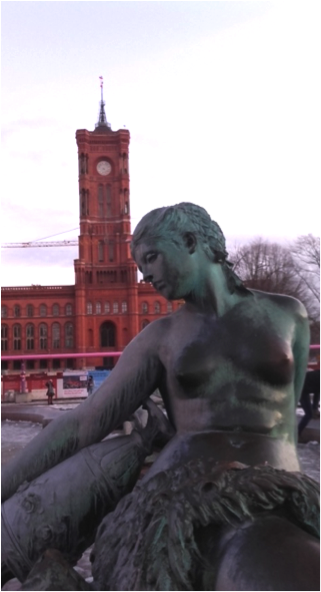 Four sea creatures rose up from the ground, in which they were half buried, gazing reverently up at their master. They were terrifyingly realistic at close quarters, as if stone and mortar were the only force keeping them from scuttling out of the square and into the city.

Twilight became dazzling night in the commercial quarter of Alexanderplatz, just a short walk away from the fountain’s bare square.

The blank-faced mannequins, representing little individuality beyond gender, were the plaza’s invisible gods. They gazed, eyeless, out of every shop window, frozen in artificial poses of confidence. A populace of empty shells, created to brand and sell.

The masses rushed by, a people as faceless and forgettable as the mannequins.

A busker stood in front of a store window marked with the large letters: ‘SALE’. His bagpipes whined and whistled out the tune of “Amazing Grace” infecting the square with an inescapable earworm.

A street vendor, bearing the weight of his livelihood on a strap around his neck, sold wurst to tourists searching for an authentic Berliner meal. His red umbrella rose above his head from his contraption, protecting him from the light drizzle that had begun to fall.

A hipster, aggressively rebellious in a pair of paint-splattered overalls and pastel hair, drank from a cigarette in the shelter of an entrance to the underground station, releasing more than the average amount of mist into the air for such a chilly evening. Commuters passed by, not wanting to give him a second glance, blinded by choice to his obvious exoticism. He was one of the living statues of Alexanderplatz; frozen figures in the midst of the constant activity.

The people of Berlin are also figures of Neptune; each is the center of their own life, their own story. Gods of their own oceans, rocked on their own tempests.

Walls, visible or invisible, make life easier. They compartmentalize and organize space; inside and outside, my space and yours. People have always been great builders of walls; to separate, demarcate, protect and even isolate.

They can be dividing, limiting, suffocating even.

What is left of the Berlin Wall, the East Side Gallery, is a testament to the opposite of the wall’s original function. It is a counter memorial, celebrating the breaking of boundaries, epitomized by the fall of the wall that divided the city into East and West, on November 9th 1989. The year is painted on, like headlines, in bold, black letters. 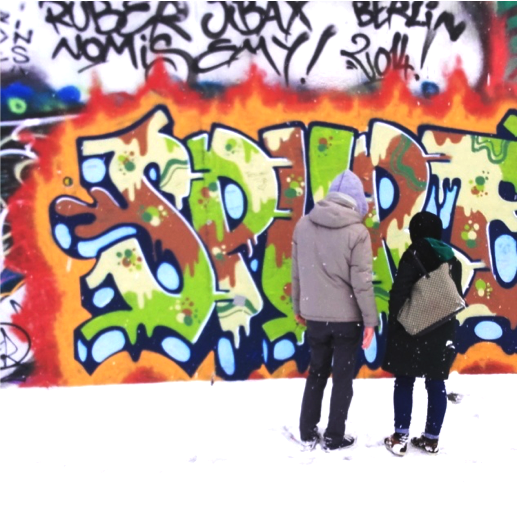 Layer upon layer of history is inscribed on the wall, in real time.

Yet what remains of the wall is not simply a static means of commemorating a single significant event in the city’s history.

The wall is living memory: while parts of it are preserved as a witness to the division of Germany, others are open for edits and additions. The wall remains a platform for expression. It is constantly evolving and up to date with the current goings on in many different parts of the world.

The wall is celebration.

A thousand voices speak through it: a myriad of exclamations of joy and despair, serenades, declarations of love, whispers of hope and skeptical criticism of society. They speak in words, images, a spectrum of colors, splattered in bold strokes of a brush or spray can or scrawled with a permanent marker in hasty handwriting. Kill all smart phones. Free Palestine! Berlin. New York. Tokyo.

Layer upon layer of history is inscribed on the wall, in real time.

Sometimes, however, emptiness and silence are the only way of remembering.

The Memorial for the Murdered Jews of Europe is a graveyard of empty, nameless blocks. Yet something sinister lurks in the apparent emptiness of the maze.

It suddenly, almost unpredictably, becomes a forest, towering on all sides: endless, monotonous rows of vertical planes and right angles, connected by an all-encompassing void. Color maintains a respectful distance, as if aware that it is unwelcome in this place of inconceivable grief.

Cold, calculated geometry rules the space alongside the frosty winter air. The blank, white sky is cut up in sharp angles as if with a paper knife and steel ruler. The space is dizzyingly claustrophobic. The monotony is nauseating. Once at the heart of the geometric forest one can only push forward until one is out of the woods.

From time to time disembodied voices and laughter can be heard. A dark figure may flit across one’s limited field of vision. People wander and lose each other among the stones.

The snow covers every surface.

Here, too, with a numbed finger, is inscribed a heart encircling a pair of initials. Yet it will last only as long as the fleeting snow.

All photos by Shenuka Corea. 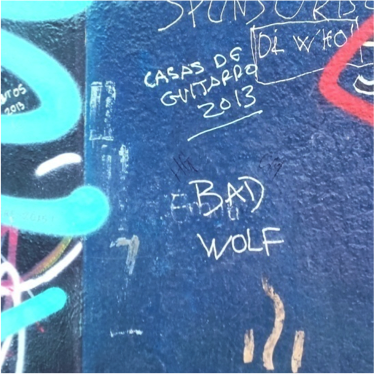 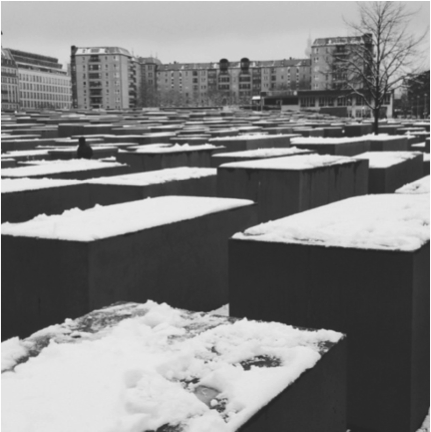 Four inches of snow covered everything, like a layer of sugar dusting. It was wonderful, light and frothy, not wet, unpleasant and uncomfortable, like everyone said it’d be. At least it wasn’t yet. The street was still, and impossibly silent with just a hint of movement at the peripheries of my vision: a car door closing, a cyclist in the distance, a dog barking; the only consistent movement was the still gently falling snow. Certainly not a hint of the masses the city has been a home to for centuries. It was hard to imagine that the busy metro was just a short walk away.

This part of Berlin, Prenzlauer Berg, didn’t feel like a city. Here, you can stand on the center of the street without having to worry about traffic, though the traffic lights, irritatingly, work exactly as they did in other parts of the city. The buildings seemed old and alike, painted with the same color palette, running from ochre to cream and branching out into other pastels, the same sort of wrought iron balconies, long, regular rows of windows, and ornate doors.

In another part of Prenzlauer Berg, life passed by in droves; the streets sometimes busy and sometimes almost empty. Scooters, bikes, sleds and other modest forms of transport prevailed. Groups of children passed by, wrapped up like burritos in brightly colored parkas. One straggled behind the rest of her large family, diligently transporting an armload of snow that was beginning to crumble, leaving a trail of broken off chunks behind her. Adults strolled by with quicker steps and soberer wardrobes. Dogs were abundant, all pure-bred, well groomed, and on long leashes, creating the occasional stain on the otherwise pristine snow. Breath was visible, eddying in the air.

Berlin is a city of eccentrics and artists. Prenzlauer Berg had its share of both. Indeed, I later found out it was known as one of the city’s Bohemian Quarters. There was, for instance, a balcony encrusted with eerie garden gnomes and other kitsch porcelain figures, all ensconced in a bed of ivy. There was also a bare tree, labeled ‘Love Grows Here’ in English, adorned with wind chimes, many of those strips of colored plastic that spiral in the wind, and strings of seashells, a dreamlike sight when surrounded by snow. The graffiti, of course, was everywhere, neon and pastel, splattered across ornate antique doorways, the seal of the present marked on evocations of the past.

Birds clustered around a bush, piercing the silence with their high-pitched babble. As I came closer to investigate I realized that the bush was hung with bird feeders on a bird table. Sensing my approach they rose in a flurry of wings to the higher window sills of a building. I felt somewhat guilty for disturbing their meal.

Berlin the metropolis, was evident in Prenzlauer Berg, in its many cafes and restaurants catering to many different international tastes; from the ever-popular hummus and shawarma of the Middle East to Mexican, Vietnamese and, of course, German cuisine. The interiors of the small restaurants, where people could unwrap a few layers of insulation, were cozy and warm. The smell of and consumption of food enhances this feeling, making going back outside a harsh surprise, as it seems colder than it did before. The idea of a long sip of a mug of steaming coffee, held between cold fingers, seems enticing. Watched through a café window, the snow could be enjoyed without its unwelcome chill.

I was sad to leave, though the darkness was beginning to fall, prematurely from my perspective, and my cold fingertips and tired feet screamed at me that it was time to go. As I was being shaken around by the movement of the train I wondered when and if I would see snow that beautiful again and how long it would be before the day’s snowfall became filthy and unpleasant, as it inevitably would.