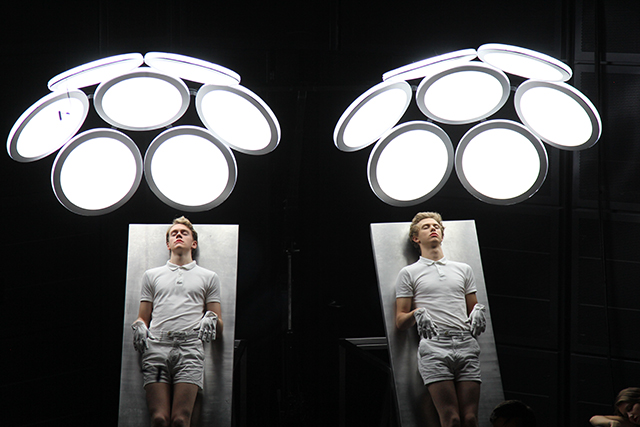 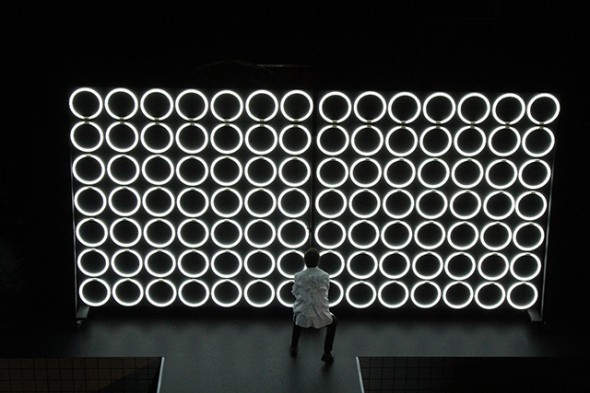 What I found most interesting about Organs, Tissues, and Candy Games, the recent NYUAD student production created in collaboration with the Zoukak Theater Company from Lebanon, was its exploration of the ways in which the human body can be appropriated for purposes beyond its initial, native intent.

The play was structured as a kind of collage of ideas, or like a wheel with the idea of Frankenstein as the hub and all of the other ideas that interested the students becoming spokes for that wheel. So, for example, there was a meditation on the Frankenstein idea of re-appropriating organs and tissues and cells for the purpose of creating life where there was not life before. And then there was a lot of text around the idea of cloning. The played explored contemporary ideas about stem cell research and cloning, and then tied that to the idea of the creation of a monster. There was a lot of material about the intent, initially, to use human organs and cells to save people from disease, to elongate and perpetuate life, and the way that resulted in the creation of something monstrous.

So the Frankenstein monster in the play was not physically deformed. It didn’t start out monstrous, but became monstrous in its humanity. It was played by two actors who were dressed identically and very innocently: completely in white with white knee socks and little sneakers and little white shorts and little white polo shirts. They were these seemingly innocent children, a pair of cloned humans, who very cheerfully moved throughout the play while speaking of the most horribly monstrous ideas and taking delight in methods of violence toward other people, including their maker-father. 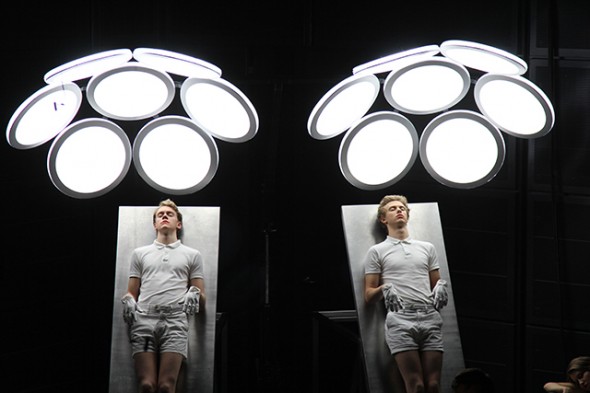 The play as whole was framed by the idea of a corporation whose aim was to collect the organs and tissues and cells of young children in order to create an army of soldier children who could not be destroyed and who would take over and dominate the Earth. So there was a lot of language, both words and images, about innocence and the monstrosity of what happens to an innocent body or an innocent mind—when science intervenes in natural, biological processes. And there was also a lot of conversation in the play about the idea of science leading to progress versus the idea of science bringing about destruction, and how blurry the line between those two ideas can become.

There was a section in which Victor Frankenstein asks, “Why is it always the mad scientist?” Why is it that so many portrayals of the scientist in fiction show us this crazy guy who’s doing something terrible and evil, as opposed to doing research in an effort to better humanity and society and perpetuate life in some way? And then this Victor goes on and creates his monstrous child clone.

In addition to cloning, the play also made use of imagery related to cancer, especially the idea of the tumor, a growth in the body that is diseased, and our attempts to dispel it or at least perpetuate life despite it – and constantly failing. This idea was framed by the fact of Mary Shelley’s dying of a brain tumor. Ultimately, the entire of idea of the monstrosity of Frankenstein that we were watching play out onstage in various ways was presented as a product of the monstrosity in the author’s own brain, a deformity of thought that’s related to the tumor that she has.

There were other instances in which cancer is spoken about or plays a role in the characters’ lives. So the entire play was pervaded by this sense of being eaten alive from the inside: both in terms of the sense of the monstrosity and propensity for violence that lies buried within humanity and also organically, physically, this idea of cells kind of running amok and eating the body from the inside. 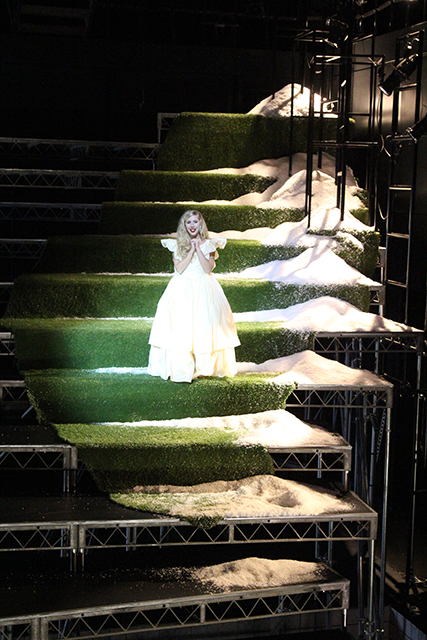 One of the more important things to me in watching the piece was something that Rubén Polendo pointed out right before the final dress rehearsal, was that if you come into it looking for the narrative line of the story of Mary Shelley’s Frankenstein, you are going to be confused and frustrated and disappointed.

That’s not what Organs, Tissues, and Candy Games was going to be. Instead, it was using Frankenstein as a lens through which to talk about a number of troubling things. And I think the play was really successful in reimagining a classic story and thinking about how a story like Frankenstein be brought into a contemporary conversations about science and body, about violence, and about the psychological monstrosity that so easily develops in children.

[Photos from Organs, Tissues, and Candy Games courtesy of the NYUAD Theater Program.]