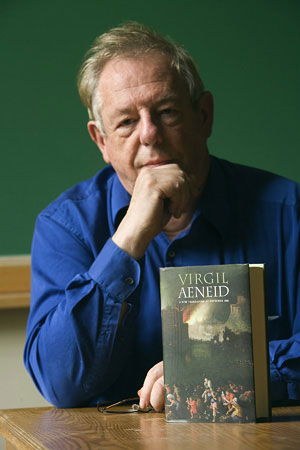 Frederick M. Ahl is a professor of classics and comparative literature at Cornell University. He recently visited NYU Abu Dhabi to visit classes and deliver a talk entitled “Lost in Translation,” Electra Street sat down afterwards with Professor Ahl to talk further about the difficulties that arise during the process of translation and to explore some of the problems that beset the teaching of literature in universities today.

ES: How did you first get involved in translation studies?

FA: I think, first of all, if you’re brought up in a culture with more than one language spoken, you end up being involved in the process of translation, because you’re inhabiting parallel universes.

My parallel universes, when I was very young, came from being in a family in which my mother was not a native speaker of English and my father was, and from living in a country whose language neither my mother nor my father spoke. So I went to school speaking and learning to speak a third language [Welsh].

ES: Was it ever confusing?

FA: Well, for example, when I was talking to my father, he would call an equine a “horse.” But my mother called it a capall, and in school it was called a ceffyl. And I remember being in school one day. My teacher said to me, “It’s not a capall. It’s a ceffyl.” And I said, “But my mother said it’s a capall, and my father said it’s a horse.” But the teacher insisted, and I was just very, very confused about what the animal was at that moment.

So, really, the process of translation was one that I was engaged in at a very early age, but the experience for me was not continued once we left the alien language environment and moved to England and were all speaking English.

When I’d tried to speak [Welsh] to my parents, they just looked at me very blankly. And I don’t remember at all the process of learning. Nowadays, you could use a computer analogy: we were on one computer program, and we were also on another computer program.

So what we are doing in the humanities through translation is often teaching doctrine in the same way that the church teaches doctrine.

ES: How have you learned to deal with this duality, and what does this duality mean for reading and teaching texts in translation? Do you have any advice to offer to those who are undertaking the challenge of designing frameworks to teach this kind of material?

FA: Maybe one out of every thousand teachers is going to give you access to what is actually happening in a Greek text like Sophocles’ Oedipus Rex, because the way we approach that kind of text is as much an item of belief as a life after death is for an orthodox Christian. So what we are doing in the humanities through translation is often teaching doctrine in the same way that the church teaches doctrine. You end up being programmed by a system that you’re not conscious of being programmed by. It’s scary: very Orwellian in a way.

ES: So what should one do with this awareness?

FA: If you’re wise, you pretend you haven’t noticed it. Then you can have a career.

ES: And if you aren’t wise?

FA: No one wants to notice. Because entire scholarly careers have been built by using that little cataclysm as an assumption. We’ve gotten ourselves into this whole binary way of thinking.

ES: How do you think that the problems identified by translation studies affect the teaching of “world literature”?

Personally, when teaching comparative literature at Cornell, I have refused teach texts that I have not read in the original, because I just don’t consider I can speak with authority about them.

It’s almost as if we try to spread everything very wide when we don’t have anything very deep. But, on the other hand, if you take people like classicists, who believe in depth, then you don’t get width at all. And you get a very sort of naïve reading.

ES: Can you teach world literature without having breadth?

FA: No. So you’re caught between a rock and a hard place.

But we need to ask, “To what extent is this high literature and poetry even part of our culture anymore? Are we in a sense trying to keep alive something that’s trying to die?” You can compare it in many ways to classical music, because it takes a huge effort to keep classical music alive. You need to have an orchestra, and unless you have people in very high places with very large billfolds, it’s going to die. But where classical music has the advantage over great works of literature is that they don’t have to be translated.

So should we just let “literature” die?  Or should we let it survive in the handful of a few people until we pass into an age when someone has a really active will to revive it?  Right now the people who run universities don’t care about literature. You do have students who love literature.  I find this all the time at Cornell.  Students come to classes and say, “Professor, I actually like poetry.” But they want courses on authors, not on the theory of literature. They say, “We want to learn literature, but it’s not what you want to teach us.  You want to teach us about Derrida; you want to teach about Bakthin. And we want to read Shakespeare.” At the same time, though, you also get others who are the merchandisers of the modern culture, who want to learn a system, which they then apply like a cookie cutter to everything they read.

[A longer version of this article will appear in print in ELECTRA STREET 03.]