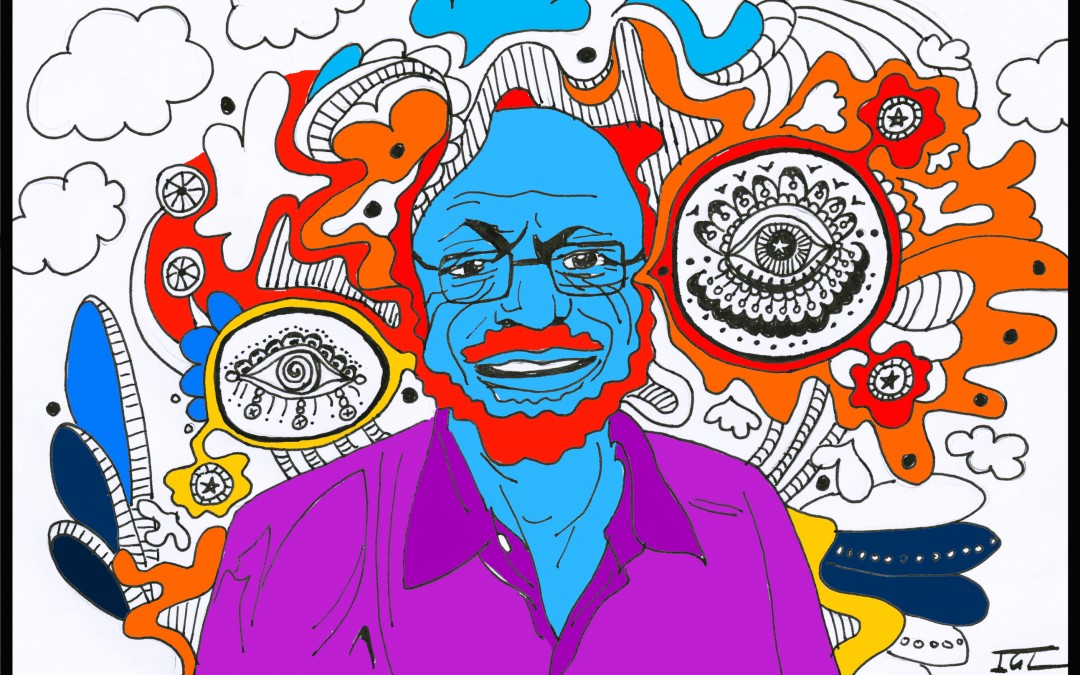 It must be bizarre for a filmmaker to be present at a retrospective celebration of his own life’s work, and even more so to attend a lecture in which someone else spends an hour dissecting it. Nevertheless, Shyam Benegal, the prolific Indian filmmaker, not only attended but also participated in such a lecture as part of the Shyam Benegal Retrospective Weekend on September 27-30, 2012. Dr. Anuradha Needham, Donald Longman Professor and Chair of English at Oberlin College, gave a lecture entitled “Performing Women: The Singing-Dancing Women of Shyam Benegal’s Sardari Begum.”  The lecture comes from her forthcoming book, New Indian Cinema in Post-Independence India: The Cultural Work of Shyam Benegal’s Films.

Needham’s presentation focused on a genre of Indian music called thumri, which originated in courtesan traditions, to illustrate the power dynamics of post-colonial India and the role of gender in shaping national identity. She situated the art form in both Benegal’s film and in the larger feminist movement. After independence from British rule, Victorian moral ideology continued to shape the new independent Indian national identity, and thumri was removed from its roots in the courtesan caste, scooped up as a form of bourgeois cultural acquisition (think grade school piano lessons or finishing school skills), and purged of erotic elements to conform to a newly imagined nationalistic Indian tradition. This change left an entire group of female artists in limbo: while their art had been refashioned into a part of the Indian musical canon, they themselves no longer retained their place in society as respectable artists. Thumri still, in some senses, carried connotations of eroticism, and while some women aimed to step away from that association, others persisted with their traditional performance methods and courtesan lifestyle in defiance of social acceptability. Benegal’s film Sardari Begum puts this distinctly feminine tension at center stage, subverting dominant patriarchal values—though never expressly favoring either conformity or rebellion—and raising questions about female identity and the transition to modernity.

Dr. Needham’s lecture was followed by a conversation with Benegal and Dr. Rajeswari Sunder Rajan, a visiting professor of English from NYU New York. A portion of their discussion is reprinted below.

Dr. Rajeswari Sunder Rajan: [Dr. Anuradha Needham’s] broad argument is that the performing woman—her commitment to her art, to the creative impulse, and to her own ambition—is at odds with the cultural constructions of femininity. Primarily if you see [these constructions] as good daughterhood, good wifehood, and good motherhood, the two cannot occupy the same space—you cannot be both a performer and a respectable woman. I think that particular conflict is something these films show very powerfully. [Dr. Needham] also stresses the outsider status of performing women in the construction of the emergent nation. On the one hand, the nation’s figuration cannot accommodate these marginalized, excluded figures, and yet it needs the reclamation of their art for the construction of a so-called national culture. They cannot be excluded successfully, because the great performing arts of the nation are important for the construction of a certain tradition and its continuance, so women pose a dilemma for the national question.

I was also interested in asking Anu to think and define whether she sees Benegal in this film attempting a form of recovery, rehabilitation, or revision. I think these are distinct in some ways. The recovery is to bring women from the margins and put them in a place where they would, at least for film viewers, seem absolutely to occupy center space. But also rehabilitation from disrepute to respectability, to rehabilitate them as figures of art and culture, as great singers, actresses, and so on. And also revision, which is a question of valuation, of ideology, of revising our view of them, and essentially seeing them not as good women in place of bad women, not on a moral spectrum at all, but seeing them as complex figures, as interesting, complex, dominant figures, rather than as being kind of negligible figures. Much feminist scholarship, too, was engaged at the time in recovery, rehabilitation, and the whole revisionary aspect of feminine scholarship. I think this is an impulse that is reflected in these films.

Or perhaps it’s none of these things—perhaps there’s no agenda, and I think that’s the most amazing possibility of all, that there is no overt, explicit agenda, but that they are primarily psychological studies of certain performing women in terms of their tragedy, of their own innate self-destructiveness. In some ways, in Sardari Begum, as Anu says, the many people trying to understand her, piece together who she was and what made her tick, also brings up the possibility that what Benegal is proffering through her representation here is the idea of her as being an enigma. In some ways, the most interesting thing to do with Sardari Begum is to leave her as an enigma.

I think the most radical aspect of this film, as well, is the question of Sardari’s being a good mother or a bad mother, because feminism doesn’t address the question of motherhood as much as it does questions of sexuality, marriage, and so on. So the idea of even making that a problematic aspect of Sardari’s representation—you know, was she exploiting her daughter as much as, in her own instance, she was misunderstood and exploited? And the whole female tradition of thumri and other art forms, which are handed down from mother to daughter.

I also find that the representation of women in this very powerful, centralized, frontal way in which they appear in these films prevents us from reading them as victims of their society. We see them being hugely exploited and misunderstood, but they are never victim figures of any kind. They are not even made sacrificial victims of their art. In some ways they are seen as women before their time. I think that’s the point that Anu, too, was stressing: the importance of the second generation, and the two young women who are consciously bearing the burden of carrying on Sardari’s tradition. The idea that these are women who come before their time, that these are anachronistic women, for whom the world and their society is not yet ready, is something I’d like to address in Anu’s paper, and, more broadly, to Shyam.

Shyam Benegal: Now, I think what Anu’s writing is a very scholarly and very fascinating study, because it gives a completely different point of view from the one I had when I was making the film. You see, when you make a film you are putting together things; when you’re studying it and analyzing it, you’re deconstructing it. So naturally, when I put it together, I automatically don’t thinking of deconstructing it at that stage. There is a process. I have no difficulty in accepting what Anu has written, nor do I have any difficulty in accepting what you’re saying, but you see for me, when I was making the film, the story suggested many things.

The most important one, of course, is that it’s a movement from tradition to modernity. The women in performing arts—any kind of performing arts—in India were always part of a particular caste of a particular community of people who did not necessarily accept [them] into what one might call the status of the accepted social norms. They could only participate as performers. As artists, their work could be appreciated greatly, but they could not necessarily have a marriage, a family, and so on. They would have, outside of all of that, but they wouldn’t be socially accepted. You always had that issue.

In the 19th century, this social structure was no problem, because there was a caste division in the whole community and they were perfectly happy with their status. But the world was changing outside, and they felt that there was a possibility of being part of another social circle, something they would be hankering for in any case, because they were always seen on the fringes of [the old society]. In the case of Sardari Begum, somewhere there is that need, because of the times she moved in, but then you have a problem of being a woman.