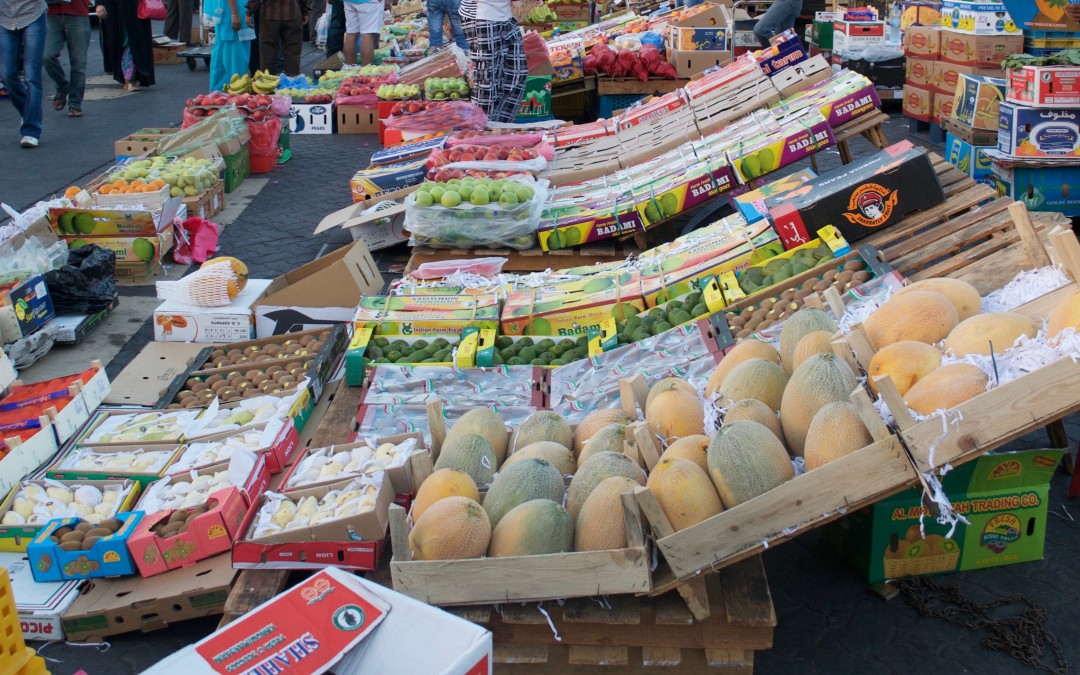 My friend looked on, aghast, as oil spilled down my shirt.

One second earlier, I had bitten down into, quite simply, the greasiest sandwich I have ever eaten, purchased for the equivalent of 12 US dollars from an operation calling itself The Cheese Truck. The oil poured from a molten block of English cheddar the size of a day planner, mingled with butter from the griddle. And then there was the truffle oil, literal puddles of it, which I had ordered on a whim for an additional ten dirhams. I was eating a fat sandwich, fried in fat, with more fat injected into its belly. But I once heard truffle oil is actually a “good fat,” and anyway, you can’t not order the truffle oil when you’re at the Love Food Festival.

Described on its website as “a celebration of extraordinary food,” the Love Food Festival could be construed as a more refined and self-conscious version of a county fair. Over the course of a mid-February weekend, a plot of turf in pristine Mushrif Park is filled with tents, kiosks, bandstands, demo stages, and “15 of the best street food traders from the streets of London,” trucks and all.

Yes, they literally transported 15 food trucks from London to the UAE. It’s fun to imagine that the trucks drove here through the Balkans, or that they floated lazily through the Suez Canal. Perhaps they went around the Cape of Good Hope. But why would you ship 15 food trucks 3500 miles in order to park them, immobile, in an open field?

The festival is put on by a company that has organized similar events across the UK since 2008, though the Abu Dhabi arm is in its second year. 38,000 people visited the inaugural round of UAE festivals and, if I were to guess, I would say there were 38,000 people there the day I visited this year. I was excited to check it out – in my 18th month of living in Abu Dhabi, I was in a bit of a food rut. I had recently (re)discovered a love for cooking and eating, a realization quite in opposition to my growing feeling that all food in Abu Dhabi tasted the same. The prospect of food trucks (“From London! They have a real food scene there!”) appealed to the vaguely elitist, bougie, West-Coast-USA part of me that was succumbing to food ennui. I chose to see this festival not as a one-off “cultural event,” the type of which come and go in Abu Dhabi all the time, but rather as a harbinger of good things to come. An indication that the people of Abu Dhabi – all 38,000 of them – were hungry for an enjoyable eating experience, an innovative culinary scene, and more creative, varied options for reasonably priced food.

In some ways, the restaurant options in Abu Dhabi run parallel to the city’s demographics. There is no lack of good food here, of course. And most of it you can purchase for less than 20 dirhams. South Asian, Levant, Khaleeji, and East African food is plentiful and almost universally delicious – or, at least, well worth the very modest price. Swing the pendulum to the other extreme, and you get the bedazzled and boozy “fine dining” establishments in the beach resorts and high-rise hotels frequented by wealthy tourists. Almost none of these spectacles can offer particularly great food or ambiance (minimalism is not a strong suit in Abu Dhabi restaurant design), and even those that do serve skillful haute cuisine are not worth the money (the exception being Zuma, which is the best restaurant in the city). Of course, most cities have their fair share of not-worth-the-money fancy restaurants – these suspicions are occasionally, gloriously confirmed by scathing NYT reviews such as the recent Per Se debacle – but their foodie reputations don’t rest on tasting menus and wine pairings. Cities stretch their culinary legs smack in the middle of the $-$$ section of Yelp, Zomato, and Tripadvisor.

As I wander around the food festival, peanut oil mist beginning to hang in the air like airport-closing fog, I reflect on the many personal biases that play into my attitude about food in this city. I have tastes that are totally dictated by my background, my hometown, even my parents (who basically thought meat was frivolous, a deprivation that I have been making up for with a lot of steak every since I moved out of the house). I have some small amount of disposable income that I can devote to eating for pleasure and intellectual curiosity, rather than just needing to fill my stomach. And when I talk about food, about cuisine, I’m thinking on a more conceptual or categorical level than just “things we eat.” I’ve never been an artist, but food is like art for me. I can look at and swish around and prod at and slurp on a plate of food the way that some people interact with a painting or a performance. And I suppose cuisine, in the way I’m envisioning it, is a performance. Someone creates something new, exciting, and thought-provoking…and then it’s gone, and won’t happen quite the same way again. But whoever saw it happen might be inspired by it, try to replicate it, and make something new themselves.

Some things are constant, comforting. I go to a place like Foodlands because it offers stability – the man at the counter will reliably give you a couple falafel while you wait, and your shawarma will be spicy and creamy every time. I don’t expect them to do a “deconstructed shawarma with uni and gold leaf,” and I don’t want that – that sounds lame. But for a person who thinks about food as a stimulating, literally and metaphorically nourishing part of life, even shawarma stops being inspiring if you eat it every day. It’s a sad place to be in your life when you start to get sick of shawarma, but I’m only human. And the so-called “fine dining” in Abu Dhabi simply doesn’t offer a better alternative.

Abu Dhabi is putting a lot of effort into defining itself as a cultural hub, a place where the local and global interact to produce expressive, international, boundary-blurring innovation. Whether or not that is happening is food for another essay. But to me, it seems that developing “food culture” should be an obvious part of this type of “development” and “redefining” and “global positioning.” To say Abu Dhabi has no food culture is, of course, absurd. Tell that to the naan guy with the tandoor behind the dry cleaners! So how do I define the gap I’m identifying without using my Western upbringing as the backbone of my argument? What does it mean that I saw a glimmer of hope in a festival modeled on others from Britain, of all places? The best I can say is that Abu Dhabi has a lot of room for thoughtful, intentional, accessible, reasonably-priced food. And, judging by this year’s Love Food Festival, there is a lot of demand.

And, judging by this year’s Love Food Festival, it seems to be a rule that food trucks must incorporate wordplay into their names. Bangwok. Crabbie Shack. Hip Pops. I suppose they are trying to lure us to the window, where the man in the cycling cap will be reliably sardonic and grumpily flirtatious. The “funny names” trend sets a very grim tone, however, when you have purchased a sad and overpriced meal that has been cooked in a bright yellow motor vehicle emblazoned with the words Fried Egg, I’m in Love. (I only use this food truck as an example because of the striking ridiculousness of their pun – this Portland staple actually has excellent food and I endorse them wholeheartedly).

Questionable marketing practices aside, as you walk around the festival grounds you see people truly enjoying themselves. For every British hipster food truck, there’s a local restaurant getting in on the fun. The whole enclosure is filled with a muffled buzz of “ooh”s, “oh!”s, and near-explicit “unngggh”s. Emiratis, expats, tourists, pre-teens, and families line up for Moti Roti. A pair of local mothers, their children playing with the nanny, watch intently as a Food Network Arabia star shows them how to use up their wilting spinach in a coconut noodle sauce. And the food is pretty good! A sushi burrito, a bagel burger, a bread bowl of biryani. Amongst the overwhelming crowds, between the hastily-erected pavilions, under the piles of soiled paper plates, through the muffled dubstep emanating from the halfhearted DJ’s laptop, I see the hint of an emerging culture of food that values unique, whole, thoughtful, reasonably priced foods of all kinds.

So, I get on board and buy the grilled cheese sandwich. The oil drips onto my shirt. Yes, it’s indulgent in a particularly Abu Dhabi way. But it’s playful. It’s make-able at home, though maybe a bit better for being slung from a truck by a man with full sleeve tattoos.

Of course, there are a lot of lingering questions. How does this type of food become a more reliable part of Abu Dhabi’s urban fabric? Is it so easy for a city to simply change its thinking around cooking and eating? Is there a way to do that responsibly? Moreover, who am I to impose my values on this adopted city of mine? How are we defining “creativity” and “good cuisine”? Is this simply a matter of adding more food trucks, or is there something deeper at play? Is this even important? Who would actually benefit from all this?

I don’t know the answers. The more I think about it, the more questions I have. And yet, I see Abu Dhabi (whatever and whoever that means – and probably only some of it, the part that I can see) becoming more interested in the things that create a culture of culinary experimentation. Perhaps people are thinking less about consuming, and more about producing, embracing, savoring, innovating, and making food local. And we are creating spaces for eating that are built around community, inquiry, and pride in the people who love their food and the flavors they bring to the table. And, because it’s Abu Dhabi, we pay 40AED just to get in the door of the food festival. If there is a shift in the food scene, and it’s not just my imagination, that will come with all the pitfalls and tensions of any other scene that purports to refine and enhance a place’s culture. But, judging from the Love Food Festival, it’s happening — and it’s oily, and messy, and delicious.