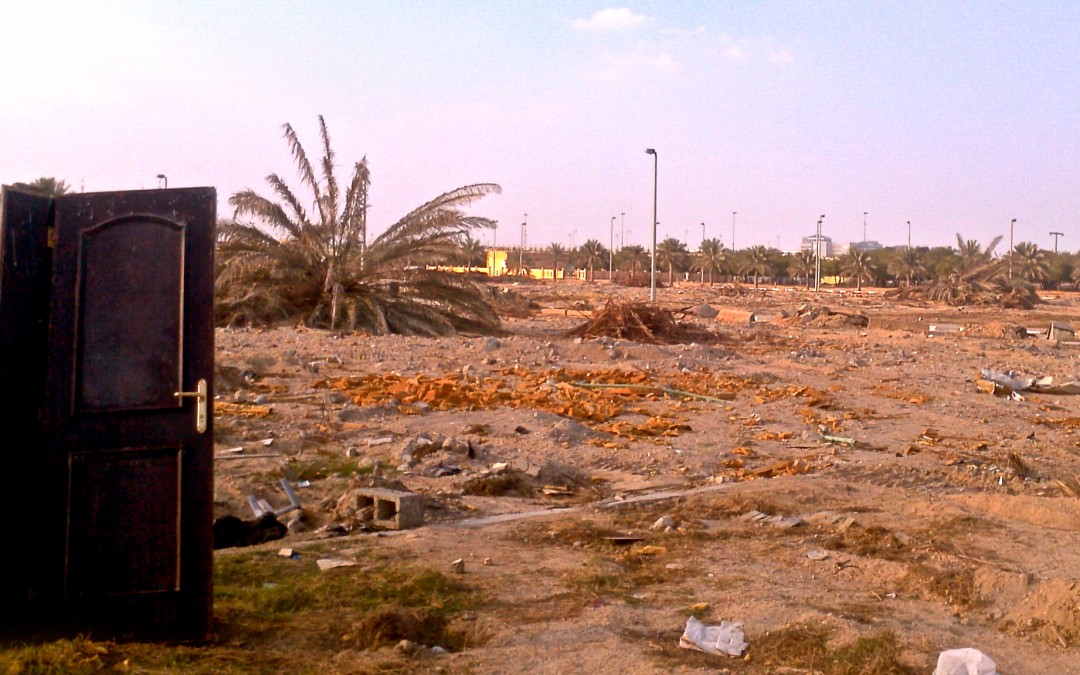 Welcome to Side Streets

I love being lost. More accurately, I love getting un-lost. In an unfamiliar city, I relish the process of orienting myself to street names and landmarks, identifying routes on a map, and navigating public transportation. Alas, one of the first things I learned about living in Abu Dhabi is never to place confidence in a general “sense of direction.” The city is a sea of tall, shiny buildings, construction sites, and homogenous storefronts. Streets have several names, department stores echo across blocks, and while taxis are cheap, I can’t always communicate with the taxi drivers. Despite having taken the bus, I can’t decipher the schedule. I wander astray if I haven’t studied a set of directions in detail just before going anywhere, but I love these moments of wayward confusion, because no matter how roundabout the route, I always end up somewhere with a story to tell.

Last spring, a friend and I – tasked with photographing examples of Abu Dhabi flora for an ecology class – hopped into a taxi right off campus and asked for the Mangrove National Park, please and thank you.

“Mangrove Village?” our taxi driver nodded. Now, this moment illustrates a key aspect of the Abu Dhabi taxi experience. You either exit the cab, realizing that neither you nor the taxi driver really knows where you’re going; or, more inconvenient, perhaps, but also sometimes more exciting, you stay, knowing you’re fated to spend at least ten more minutes speeding around the city, taking swooping U-turns and potentially ending up far from your destination.

We chose the latter, and 25 minutes later arrived at a suburban compound. There were no mangroves in sight, but the sign read: Mangrove Village.

Lost but undaunted, we set off in the direction of a residential street flanked mostly by sand and private fences. We live in the heart of the city, in a high-rise surrounded by businesses, dilapidated apartment buildings, banks, and hospitals. The closest street is six lanes across. Mangrove Village was completely different – this was suburbia, Abu Dhabi style.

At one point, the development abruptly stopped. In front of us was a stretch of empty lot and torn-up sidewalk. Trees had fallen around piles of used construction material. We broke off conversation mid-sentence and stood, staring. I pulled a pair of sand-encrusted pants from the rubble.

We wandered around in slow motion, glimpsing swirls of cotton candy insulation and blue plastic sheeting among the debris. Staring at the ground in an attempt not to step on a nail, I didn’t notice right away what my friend saw – a door, propped in the midst of it all. And off in the distance, pristine and beautiful, the Sheikh Zayed Grand Mosque. 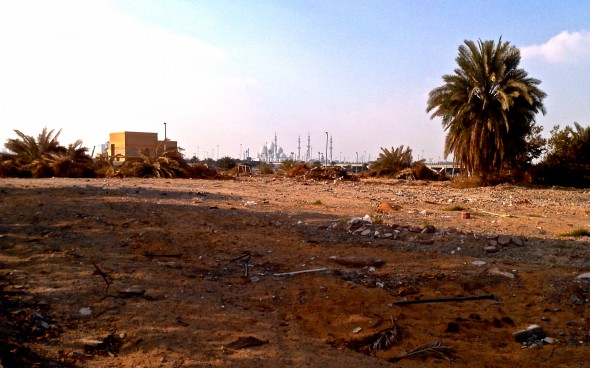 Once we’d pulled our gazes away from what looked like the set of a post-apocalyptic film, we made our way back to the roads, found a cab, and returned to the more familiar areas of the city, where Abu Dhabi is easily sorted into opposites—extreme wealth alongside extreme poverty, mosques and abayas next to sunburnt tourists in bikinis, East and West, old and new, tradition and modernity. These oxymoronic qualities can be shocking, but never invisible. But the Abu Dhabi we saw out at Mangrove Village seemed naked, stripped of glossy facades and simple dichotomies. It was as if we saw each layer of the city being peeled away: the desert, the buildings, the mosque, the ghostly evidence of human labor. The Mangrove Village site looked abandoned, but perhaps work had only been paused, or perhaps something had been destroyed and was being re-built: we had stumbled into something that was in process, but what the process was, we couldn’t know. But walking there offered us a way to see beyond easy oppositions.

In “Side Streets,” Electra Street will take you along on adventures around Abu Dhabi as we uncover those places that are rarely destinations but are almost always more interesting than where you wanted to go in the first place: places where you can see the city growing, shifting, changing. We’ll explore little known restaurants, secluded shops, and unexpected cultural activities. We’ll be combing the streets to bring you details of artistic and cultural life that might not make it into the pages of Time Out. Electra Street is a magazine founded on the basis of journeys and exploration, both literal and figurative. With “Side Streets,” our aim is to get you a little bit lost on those journeys, if only to see what can be discovered along the way.

As always, if you have insider tips or questions of your own (Which sweets shop has the best coconut barfi in town? Where can I find a decent piece of non-Ikea furniture? What’s the off-menu special at that hip new café? Is there a slam poetry scene here in the Dhabs? How does one navigate the fish market? And does the public library actually exist?), we’d love to hear them. Send us your feedback through Facebook , Twitter (@ElectraStreet), or email (electra.nyuad@gmail.com), or leave us a comment below.