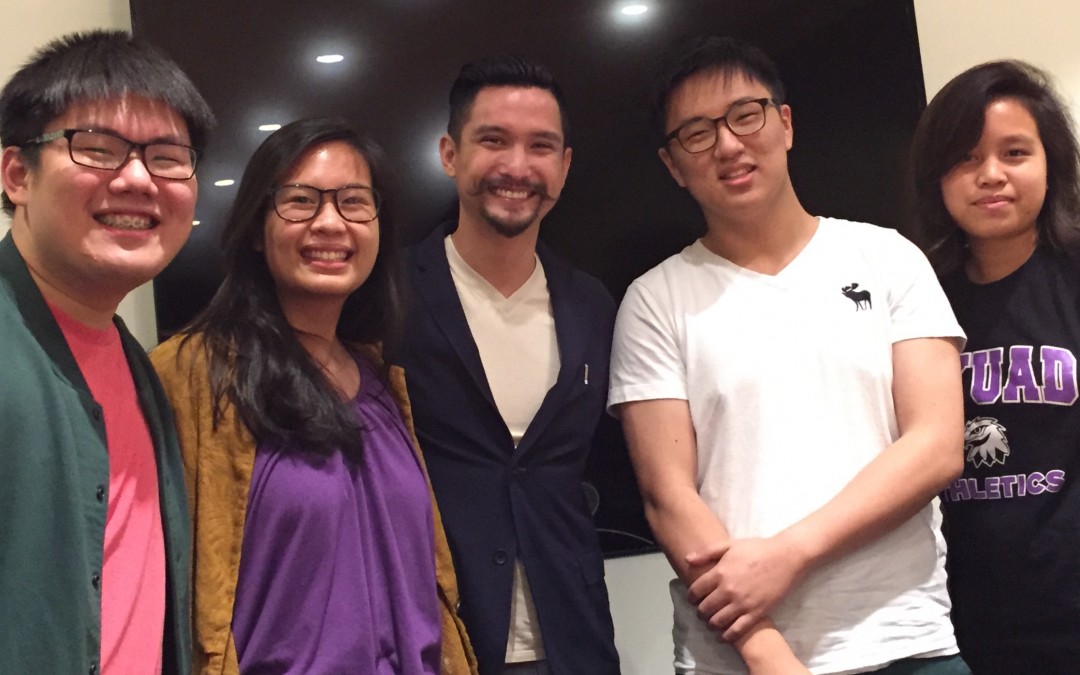 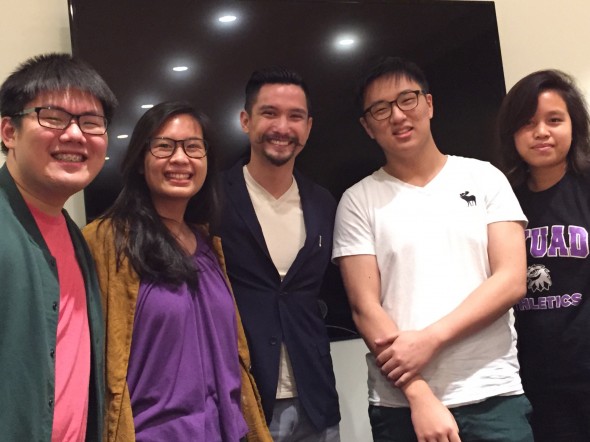 Miguel Syjuco won the Man Asian Literary Prize in 2008 for his first novel, Ilustrado. Born in the Philippines, Syjuco earned an MFA from Columbia University in New York, and subsequently a Ph.D. from the University of Adelaide, Australia. He gave a talk and a workshop at NYUAD in February 2015, which is when Gabrielle Flores, a second-year NYUAD student, conducted this interview. “Ilustrado,” which means “erudite” or “learned” in Spanish, was a term used to describe the educated, middle-class Filipinos who had been educated in Spanish and exposed to European nationalist ideals during the late nineteenth century.

Gabrielle Flores: What was the writing process like for Ilustrado?

Miguel Syjuco: Ilustrado was a book that had many distinct goals. I wanted to write a book that found inventive ways to address some of the issues that I have with writing Philippine writing specifically in English.  And while I was doing my master’s Columbia in New York, one of the things I did to make extra money was be a fact checker for the Paris Review. So one day I found myself in the Butler Library stacks there in Columbia, surrounded by all these books.  As I was reading all of this material, I was thinking, “Wow, this is a very interesting way to look at the life of a character, through all of these things written about them, all of these different texts.”

And so this idea that I wanted to write this book about looking at Philippine history, especially from the point of view of the role of the elite– and the failure that they had ever since the Ilustrados– this kind of came together, that, “Okay, I’m gonna write this book about this author named Crispin Salvador, and I’m going to address all of these issues.  I’m going to look at Philippine history all through his work and he will be the window into that world.”

But rather than write the way we normally do when we come across a word like “bibingka,” right, and italicize it even though to us it’s not foreign–where you say “he cut into that bibingka–”

GF: Where you have to explain–

MS:  ” … that delicious rice cake much enjoyed by Filipinos during Christmastime,” right? [Laughs.] Instead, I thought, “Okay, well, why don’t I write using– naturally didactic forms?  Essays, email– memoir so that whereas before we used to have to explain our culture and explain our history I don’t need to anymore, right?  I can use things that are naturally explaining to do that.

I think the book took three, four years, constantly working on it, trying to find an agent. I was wondering if anyone would ever want this book.  I had some very close friends reading it.  They were saying, “It’s good,” and, “But you need to do this.”  I was editing it all the while.  Then in 2007 they announced that the Man Asian Literary Prize would accept manuscripts.

GF: I see how the novel encompasses Philippine history, but also Philippine society.  It’s so hard to explain, even simple questions like, “Oh, what’s Filipino food like?” because Filipino culture is such a mix of different things.

GF: Did you come across that difficulty when writing your book? How did you know which parts of society to look at specifically?

MS: I was really focusing on this coming and going that we Filipinos have, which I believe started with the Ilustrados and has continued today. I believe the OFWs of today are the new Ilustrados.  Going abroad, learning all they can, working hard, and then returning with an awareness, and their savings, and sometimes children who, you know, are learning about the culture for the first time and wanting to engage.

I came from a very comfortable background.  My parents were in politics and my classmates, you know, they’re good people.  They love the country. But society is such that– family, and duty, and politics are just so hard to change. These  well-meaning, idealistic young kids, you know, they’re not able to do as much as they would have liked to benefit the society. You know, we call them conyo. We call them whatever.  They’re spoiled brats.

But not all of them are like that and I wanted to write a book that was sympathetic in that regard and fair.  One of the issues that I’ve always had with Philippine writing is that it’s always– we’re always looking for a savior and  the elite are always the villains.

GF: When you were writing the book, did you have a target audience in mind?  Were you aiming for the book to be more for the Filipinos as a Filipino text or for a foreign audience who doesn’t know anything about the Philippines? Or do those two audiences overlap for you?

GF: You’re reading tonight from your new novel I Was the President’s Mistress!!! How is this book different in some ways – or maybe the same in some – as Ilustrado?

MS: There’s an old cliché that you have your entire life to write your first novel, then 18 months to write your second novel.  All of the short stories, all of the anecdotes, everything went into Ilustrado. But I hope this new book will be out next year, before the Philippine election.

MS: President’s Mistress uses certain character from Ilustrado, Vita Nova, the starlet. She’s involved with– some scandal, where she’s kind of spilled the beans on the president who she was seeing. She’s swept up into this big political thing and wants to write a a celebrity tell-all memoir.  The book is a series of transcripts, of her talking about all of her 12 lovers and the 12 lovers all talking about her and each other.

It’s sort of like a she-said, he-said type of thing. Ilustrado was a bunch of different forms that the reader had to put together, like a collage or like a puzzle, President’s Mistress is sort of like a deconstructed book where it’s only the materials that a ghostwriter would use to write a celebrity tell-all memoir.

GF: So it’s kind of like that tabloid show back home, The Buzz, except deconstructed.You said that you did a Master’s at Columbia.  In your mind is there an ideal sort of creative writing curriculum? I know that when I told my parents I wanted to go into literature, they were like “Oh, why don’t you go to business?”

GF: You know, doctor, medicine, or–

Being at Columbia–it was a very rigorous way of looking at making fiction. Workshopping particularly.  It’s not just about beautiful writing; it’s about the form, and the structure, and everything.   Now, teaching creative writing– going back to your question about what would be the ideal–I enjoyed my time at Columbia, but it was very focused on literature in the sense of style, in the sense of creativity within the craft of fiction. When I worked freelance as a journalist, I learned how to find stories.  And my ideal is really a program that fuses– I guess–journalism, some people would even say activism, with storytelling.  Writing journalism teaches you so much.  How to write to deadline, how to write to length, how to take criticism, how to revise, how to redefine the story, how to position information or withhold information, which is a very important thing; and the distinction between news and art.

So I would want a creative program with outreach programs.  I would like a mentorship, fieldwork– questioning, of course, how we write, how to write.  What sustains a writer in the end or at least what has sustained me is questioning why we write.

GF: You kind of answered my question already a little bit, but I’m going to ask anyway. It’s a simple question but maybe not so simple: what’s your favorite part about being a writer?

MS: The hours are pretty good. [Laughs.] They’re pretty flexible. It’s a very involved work.  Anybody who’s ever written a novel, be it, you know, someone as great as a Nobel Prize winner, down to or up to young writers who are doing NanNoWriMo, we’re all learning how to engage with the form and how difficult it is. It’s the hardest job I’ve ever had.  And I guess that’s kind of why I like it.  I’m very lucky that it’s allowed me to go all over the world, and meet people, and meet other writers, and be part of this conversation: Who are we?  And why are we here?  And what can we learn from each other?  I’m a political person and one of my tools is writing. I may not change the world through my one book, or two books, or how many books.  But I’m hoping that those readers who read it will be the people who will.  So it’s a long game, that the people who are questioning our society, questioning what it is to be Filipino through my work and the works of other Filipino writers, those are the future captains of industry, and politicians, and activists, and social workers, and professors, and parents.

I’m hoping that I can kind of say, “Hold on. Wait a second.  Let’s stop and think.  Is this right?  Is this wrong?  What should our country be? How do we hold our leaders accountable?” Because if they’re asking those questions, then I’m doing the job that I wanted to do.